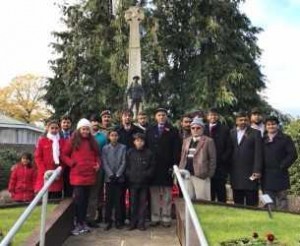 members of the Ahmadiyya Muslim Youth Association (AMYA) have been continuing their work with the Royal British Legion by collecting in high streets, railway stations and stadiums across the UK. The Spen Valley Branch of the AMYA has also been helping the Heckmondwike branch of the Royal British Legion. The practical ways in which Spen Valley AMYA members were able to help were as follows: On Armistice Day, Saturday 11 November, AMYA members joined the two minute silence at Heckmondwike War Memorial in Green Park and also met members of The Heckmondwike Royal British Legion. Immediately after this event they helped the Poppy collection at Morrisons, Heckmondwike. In addition to assisting with the collection they also donated £100 of funds they had collected from their members ahead of the service.

On Remembrance Sunday local AMYA members joined the remembrance service and presented a wreath at Heckmondwike War Memorial. The local Imam, Mr Sabahat Karim, also recited an Islamic prayer in English which honours the dead. The members met local MP Tracy Brabin along with local councillors including Councillor David Sheard (leader of Kirklees Council) and Councillor Viv Kendrick. The Caliph and worldwide head of the Ahmadiyya Muslim Community, his holiness, Hazrat Mirza Masroor Ahmad, said: “Muslims are obliged to be loyal to the country in which they live. “Honouring those who fought to defend and safeguard one’s country is an important principle of Islam and in fact is an important principle of peace – especially when it is carried out with a sincere heart and for the sake of winning God’s pleasure.” Mr Manzoor Ahmad (President of AMYA in Spen Valley) said “it is our duty to help the Poppy Appeal and we were delighted to be able to help in some small way” Wayne Macdonald, chairman of RBL Heckmondwike, thanked the Spen Valley AMYA members for their contribution and said that he looked forward to working with them in the future.