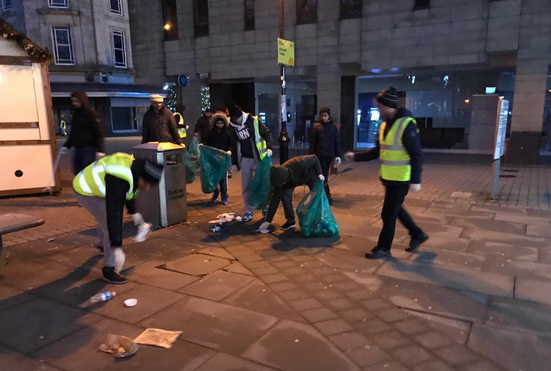 The Muslim Youth group AMYA was out in the the early hours of Wednesday to clean Bolton Town Centre by picking up litter and plastic waste.

Leader of the group, Ahmad Salman Arshad, said: “We had a group of 15, with six of those being under 15, helping to clean the town for their community,.

“We have been doing this since the last four years, and it helps the young people understand the importance of giving back to their community, and not just asking and taking.”

Mr Arshad has been a leader for four years, but joined the group in Bolton over 15 years ago as a youth himself.

He said: “I joined when I was young, and believe that even in our religion it says we should keep our streets tidy.

“It’s good to get young people involved to use their time for the betterment of the society, as we have an issue within Muslim youth where they may do wrong things.

“The children as young as six came early to help out, and said they wanted to do it, so it’s nice they chose this.”

In total, some 7.7 billion plastic bottles are bought across the UK each year, resulting in substantial amounts of single-use plastic waste.

With newer and stricter rules being proposed for single-plastic use, AMYA, the UK’s oldest and largest Muslim Youth group takes to the streets in the early hours of New Year’s Day every year to clean the UK streets by picking up litter and plastic waste.

In the past, they have also completed blood drives, tree planting and helping the homeless, all part of their annual activities to help better the area around them.

Mr Arshad said: “Pollution is a big issue and I think we should be out there helping the local authority clean our streets and if we all do it, it will make a change.”

However, this year AMYA felt the new year must begin with a nationwide plastic and waste clean so that the future can stay optimistic.

National President of AMYA, Abdul Quddus Arif said: “Around 1,500 Ahmadi Muslim Youth across the UK will take to the streets on New Year’s Day to clean the streets while others will mostly be asleep or on holiday enjoying themselves.

“As Muslims, for us to positively contribute to our society and help those around us is integral to our faith as the founder of Islam, the Holy Prophet Muhammad, peace be upon him said that loyalty to one’s country is part of faith. He also set guidelines for Muslims not to be wasteful and to deem removing harmful objects from the streets as charity.

Armed with brooms, bin bags and litter pickers, the young Muslims wish to clean the streets of the UK hoping that 2020 will see a drop on pollution and plastic waste.