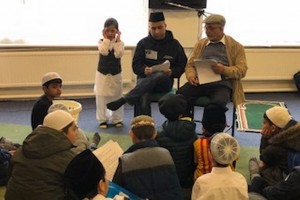 More than 200 young Muslims came to Huddersfield today to take pledge allegiance to the UK.

The event, organsed by the Ahmadiyya Muslim Youth Association, was arranged to promote moral values, education and national loyalty, as well as pledge allegiance to Islam, Great Britain and the British nation.

It featured a football tournament, volleyball, cricket, athletics events and a bouncy castle for the younger attendees.

Yorkshire regional youth leader Nadeem Ahmad said a central feature was the pledge of allegiance, which included a promise to serve and protect Great Britain.

He said: “A very pleasing number of young professionals and children from all walks of life are here today in Huddersfield.

“The motto of AMYA is ‘A nation cannot be reformed without the reformation of its youth’ and so everything we do is inspired by a desire to improve in all aspects of our lives. Therefore, we hold this annual event to learn and practice the true Islamic teachings.

“We believe that according to the principles of Islam, tolerance and mutual respect are the cornerstones for countering divisions and creating harmony within society. The youth attending were taught this and that serving their nation and being loyal is an extremely important part of Islamic faith.”

“The AMYA has for decades mentored tens of thousands of practising young British Muslims and instilled in them the understanding that peace, respect and tolerance are values shared by both their religion and nation. As a result, AMYA members have contributed tirelessly towards British society and have been commended by every part of society for their work.”