Young Muslims hand out more than £1M to charities

CHEQUES totalling more than £1 million have been handed out to an array of charities by the Ahmadiyya Muslim Youth Association (AMYA), at a ceremony held at Islamabad in Sheephatch Lane, Tilford. 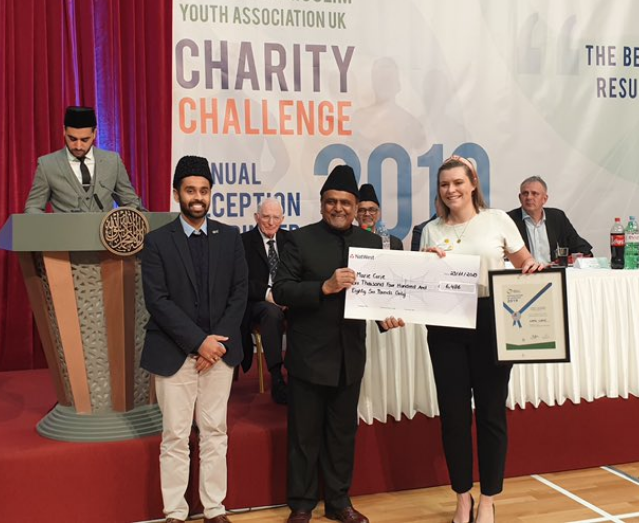 In excess of £1.1m pounds was raised by the UK’s oldest, largest and leading Muslim youth organisation in the past year, through various campaigns, events, challenges and activities.

The cheque presentation took place at the new international headquarters of Ahmadiyya Muslim Association UK in Tilford, inaugurated on May 17 this year.

This was the first event of its kind in the new compound making it unique in its own regard.

The mayors of Waverley and Farnham attended, and were joined by representatives of many of the beneficiaries, which include Barnardo’s, the British Heart Foundation, Great Ormond Street Hospital, Humanity First, Macmillan Cancer Support, the NSPCC, Save the Children, the Royal British Legion, The Royal Hospital for Neuro Disability Leukaemia & Lymphoma Research, and the RNIB.

The Mayor of Waverley, Councillor Mary Foryszewski said: “You really do go such a long way to support not just locally but internationally.”

Her Farnham counterpart, Cllr Pat Evans, added: “You are valued. You work hard. You achieve.”

The president of AMYA, Imam Abdul Quddus Arif, said: “It is part of our faith to be loyal servants to our nation, therefore, one way to demonstrate this Islamic teaching and fulfil our faith is by collecting funds for our British charities. Our campaign is called Mercy4Mankind as we believe that the founder of Islam, the Holy Prophet, Muhammad, peace be upon him, was sent as a mercy for mankind, and it is his these values which we act upon.”

Usman Ahmad, event organiser, added: We actually helped Cancer Research UK raise £3.3m this year which I think has never been done before.”