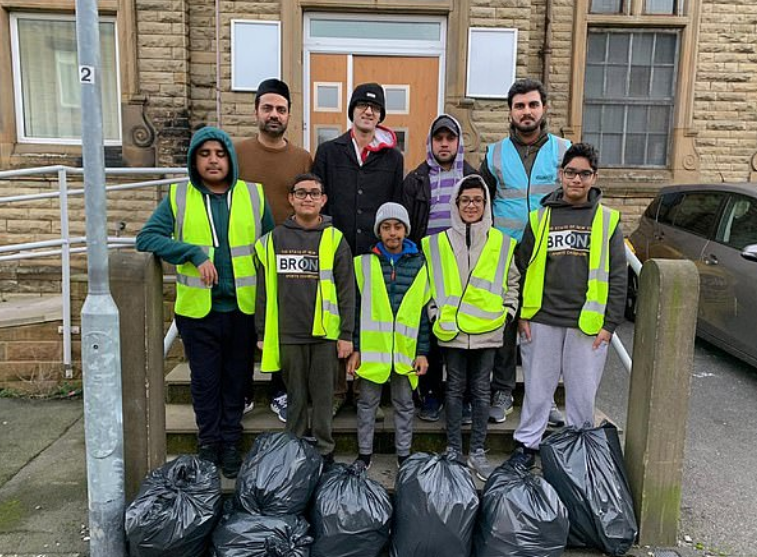 With many Brits across the country likely to be nursing a hangover today, young Muslims up and down the UK decided to get out of bed early in order to clean up the litter-strewn streets after New Year’s Eve celebrations.

While some revellers stumbled home from a night out, more than 1,500 members of the Ahmadiyya Muslim Youth Association (AMYA) took to the streets to pick up the mess.

They said a special prayer before donning hi-visibility jackets and heading out in their local areas.

During the annual clean-up they collected hundreds of bags of rubbish in places such as London, Cardiff, Edinburgh, Glasgow, Manchester and Walsall.

‘Many people will be out on the night of new year’s eve celebrating the start of the New Year. As Ahmadi Muslims, our year begins with congregational prayer, we come together and pray for the world, for all those struggling.

‘Thereafter we all get together and go out on to the streets to clean up after the celebrations have ended, this isn’t just to keep our surroundings clean, but is also done to remind our young Muslim youth about the duty they have to serve their country.

‘More than that, it is also about trying to instil lifestyle changes in the youth, we take for granted the amount of food and plastic which is wasted, and such events are a reminder of how current consumption is destroying our planet.’

The group has been cleaning up the streets for a number of years and according to the clean-up coordinator Mubashar Raja, it is looking to expand its coverage across the whole of the UK.

He said that this year the team aimed to pick up 5,000 bin bags worth of litter in the morning alone and said that the local councils and communities are also on board in some areas.

One youth who participated in the clean-up said the turnout at the events shows how a good cause can bring everyone together.

Malik Takreem Ahmed said that it was ‘amazing’ to see the smiles on the faces of the people they help and said that most of his friends celebrate the new year by being with family and friends but claimed that there is ‘much more to it’ if people can spend the time helping others.

Malik also said the group makes him feel as though he ‘belongs to something which is a positive driving force in the world.

AMYA is a national faith group which is made up of young Muslim youths. It aims to ‘nurture the physical, moral and spiritual development of its members’.

It is a subsidiary of the Ahmadiyya Muslim Association UK which has over 8,000 members.