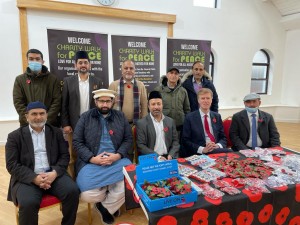 Worshippers at a mosque in Upton Park hope to raise £35,000 for this year’s Royal British Legion Poppy Appeal.

A total of 25 volunteers from Baitul Ahad Mosque, which forms part of the Ahmadiyya Muslim Community association, will collect for the charity.

Poppy appeal organiser, Mubashir Siddiqi, said: “It’s a noble task to raise funds for soldiers who have lost their lives or need some help.”

Poppy Appeal 2021 launches on Thursday, October 28 with collectors returning to communities across the UK to exchange donations for artificial flowers.

As part of this year’s fundraising effort, volunteers from the mosque have been asked to collect at Westminster Underground Station for the appeal which ends on Remembrance Sunday (November 14).

Abdul Wadood Khan, president of the Ahmadiyya Muslim Community Newham, said: “It is a good cause which deserves support. It is our moral obligation to respect the armed forces.”

The poppy represents those who have lost their lives in active service in all conflicts from the First World War to the present day.

In the 1914-18 conflict, 1.2 million Indian soldiers – 400,000 of them Muslims from what is now Pakistan – fought for Britain. About 450 Muslims serve in the British Army, according to the Ministry of Defence.

The poppy also honours civilian and uniformed services which contribute to national peace and security as well as acknowledging innocent people who have lost their lives in conflict and acts of terrorism.

The Royal British Legion describes the funds raised as a “lifeline” for serving personnel, veterans and their families.

East Ham MP Stephen Timms, speaking at the mosque in Tudor Road, said: “Thank you for your support for the Royal British Legion.

“This fundraising is a really important, national event where everybody comes together to remember those who sacrificed their lives keeping the rest of us safe.”

No strangers to good causes, worshippers at Baitul Ahad recently hosted the 2021 Charity Walk for Peace on behalf of Ahmadiyya Muslim Elders Association (East Region) at the mosque.