Community spirit was truly alive in Wolverhampton as worshippers of all faiths united for an open-air feast. 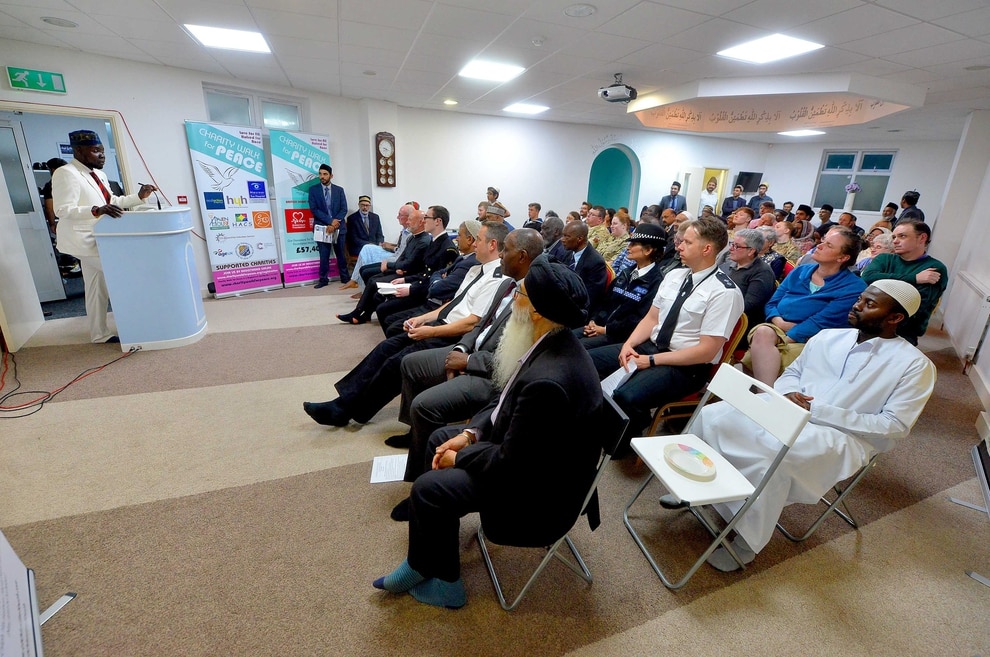 People from across the city came together at the Ahmadiyya Muslim Community’s Willenhall Road base to celebrate the holy festival of Ramadan.

Leaders from the Sikh and Christian communities joined forces with police, sea cadets and the armed forces to mark the Islamic celebration by sharing a meal under the warm breeze.

Muhammad Yaseen Khan, president of the Ahmadiyya Muslim Community’s Wolverhampton branch, said: “Our motto is ‘love for all hatred for none’.

“We aim to build relationships of trust, friendship and respect across communities and this gathering helped to promote these objectives.

“We believe we can achieve a humane and peaceful society up and down the country, not just here in Wolverhampton, by breaking down the barriers.”

Ramadan is celebrated by Muslims across the globe by fasting from dawn until dusk during the ninth month of the Islamic lunar calendar.

Muslims believe Ramadan is when the holy book the Quran was revealed to Prophet Muhammad, with families breaking their daily fast each evening with an Iftar meal.

Residents poured into the Baitul Atta Mosque and Community Centre last week, hearing a recital of the Quran and learning of the importance of Ramadan.

Wolverhampton South East MP Pat McFadden joined the celebrations and thanked the Muslim community for their contribution to the city – which recently included holding a vigil to commemorate the victim’s of the Sri Lankan terrorist attacks.

He added: “I have been a regular visitor to this mosque since it opened some years ago.

“This is a community that has reached out across faiths, in the best possible way, in the years the mosque has been here.

“Regardless of who a victim is of a terrorist act, the condemnation and the outpouring of love from this mosque and community is always the same.

“There’s a lot of debate in the country now about who we are and what direction we are going in, and to have here in the heart of Wolverhampton, a religious organisation that is emphasising that we have more in common than anything that divides us, is very valuable and all of us should be grateful.”

Visitors fell silent as the Islamic calls to prayers echoed from inside the centre before sharing dates and grapes as Muslims broke their fast.

As the sun began to set, all guests were encouraged to sit next to strangers and get to know their neighbours over a Iftar meal outside.