What I learnt from the 2018 national peace symposium? 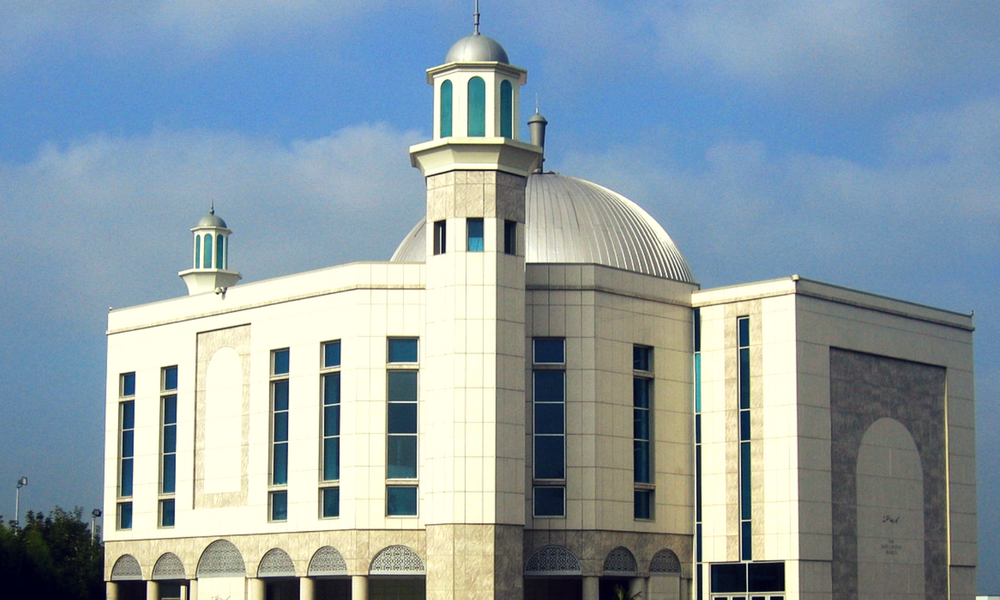 On Saturday evening I found myself beating my way through the wind and snow to get to the country’s largest mosque. It was right at the end of the Northern Line in Morden, London, which in that weather felt like the edge of the world.

I was attending the 15th National Peace Symposium, having been invited as a press attendee by a member of the Ahmadiyya Muslim Community communications team, who had read this blog and thought it would be of interest, given my focus on the human rights and justice side of climate change. 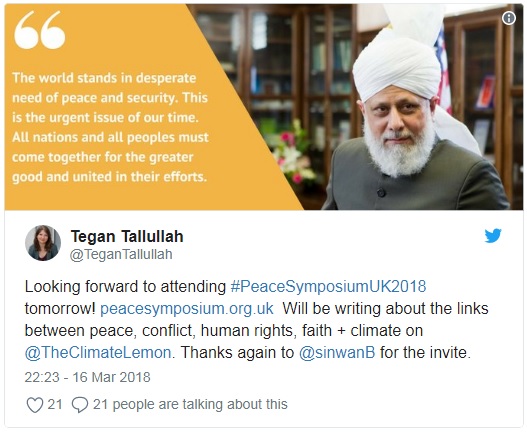 The annual event is attended by hundreds of delegates, including many politicians and diplomats as well as faith leaders, NGO reps and others. It’s run by the Ahmadiyya Muslim Community. What on earth is that? Well, I hadn’t heard of them either until I was invited to this event.

I won’t go into it too much, but they are essentially a religious movement comprising tens of millions of Muslims around the world, which is only around 1%, as Islam is so huge. Their core beliefs are very similar to more mainstream Sunni Muslims, but they believe the second coming has already happened, in the form of their founder Mirza Ghulam Ahmad, while other Muslims are still waiting. This is seen as heretical by many and the Ahmadis face terrible persecution in many places, particularly Pakistan. But if you’re like me you probably don’t care whether this is “heretical” or not. What’s more interesting is that the Ahmadis have a progressive and peaceful interpretation of Islam. They reject all forms of political and religious violence. They believe in freedom of religion and the separation of mosque and state. They say their faith compels them to serve others, particularly by helping the poor, and being compassionate to those that wrong them. The Ahmadiyya Muslim Community is very organised, with national and local subgroups all aligned with their international group. Their current leader is the Caliph, Hazrat Mirza Masroor Ahmad, referred to as His Holiness.

Anyway, in this post I’m going to outline what happened at the symposium, the most interesting points from the keynote speech and my key takeaways. I’ll also let you in on what follow-up posts I’m planning. (This event gave me a lot to think about and has inspired a couple of deeper posts, but I wanted to get my initial thoughts out first).

What I did at the national peace symposium

After registration I was greeted by Sinwan, the guy who originally invited me, who took me to the press conference and introduced me to Fatir, my host for the evening. I had been told in advance that I could attend but probably wouldn’t be able to ask a question because of the large number of national and international press that were present. So, I was quite surprised when I was asked if I’d like to ask one. Especially given that I’d been asked twice to move further to the front and was now sitting in the front row seat right in front of the Caliph.

“So, what esteemed journal are you from?” asked one of the staff, pen and paper in hand. “Umm, The Climate Lemon?” I stammered. I told him what the blog is about and when I explained that “I think climate change is a human rights issue because the global poor will be affected the most while doing the least to cause it” he was very impressed, which made me feel better.

Still, when the person asking a question before you is from The Independent and you’re from a tiny blog that no one’s heard of, it’s hard to fight off the imposter syndrome.

I asked the Caliph what the Ahmadiyya Muslim Community can do about the moral issue of climate change. He said one of their auxiliary organisations is working on providing renewable energy to poor remote villages in Africa and Asia, as well as clean water projects. This group is apparently called IAAAE and I am going to ask them for an interview to learn more about their work.

Next it was time for the main session, where all the 900-odd delegates were seated in a large hall around tables. Several VIP guests gave short speeches, then there was the presentation of the Ahmadiyya Peace Prize (the winner was a Russian doctor who treats injured children in war zones) and finally the keynote address by the Caliph. This was the most interesting part of the event in my opinion, so I’ll pull out some of the key points below. After the speech we had dinner (as is my vegan way, I spurned the meat and had saag aloo with lentils and rice). Fatir then asked me if I’d like a tour of the mosque, so we headed out.

The Baitul Futuh Mosque is not only the biggest in the UK but the biggest in Western Europe. Apparently, it was refurbished from an old milk factory. The inside has two large domed chambers for prayer, one for men and one for women (complete with creche). It was pretty much empty at that time and had a feeling of peaceful solitude about it.

After the tour I was hoping to catch the exhibition which had also been running throughout the evening, but unfortunately it was finished by the time I got there. But, as I had travelled for a family event earlier that day and had been on the go for about 14 hours, I wasn’t too sad to head home and follow up afterwards with the groups I wanted to meet (namely IAAAE and a disaster response aid group called Humanity First).

Highlights from the keynote speech

Like I said, I thought Hazrat Mirza Masroor Ahmad’s keynote address was the best part of the event. Here’s some of the points I found most interesting.

– Climate change is a priority of the global community, and protecting our planet is an incredibly precious mission. But developed countries need to understand that developing countries have other priorities that deserve the same urgency. The very poorest people are not worrying about climate change when they’re worrying about how to feed their children today.

– This cannot be dismissed as ‘other people’s problems’. Global poverty has adverse effects on people in developed nations too. Poor nations should not be looked down on. They are our brothers and sisters and we should help them to stand on their own two feet.

– The poor, marginalised and illiterate are targeted by extremists. Being illiterate makes people more susceptible to brainwashing and propaganda. Orphans from the war in Syria are also targeted by Islamic extremists who use their suffering to push them into a life of terrorism.

– Sparked by recent terror attacks and widespread immigration to the West, there has been a worrying rise in far-right nationalism, which have become increasingly vocal and have made political gains. They too are extremists, who wish to incite the masses against those of a different race or religion.

– Inhumane weapons are manufactured in the developed world and sold without care for the consequences, only looking to get the biggest contracts. They only see it as a way to boost their economies. But their exported weapons are used to kill and maim.

– Use of force to stop an aggressor is valid only if fair and proportionate, to restore peace, not driven by self-interest or revenge. Force rarely has long term benefits.

– War causes air and land pollution and is a massive waste of resourcesas the buildings and infrastructure that are destroyed have to be rebuilt.

– Islam is often branded an extremist religion that incites violence. But even though Islamic terrorists claim to fight in the name of Islam, they are really fighting a geopolitical war for power and territory. They undermine the efforts of the vast majority of peaceful law-abiding Muslims.

– It is not only Muslims causing conflict in the world. Inequality, extreme poverty, the arms race and unjust foreign policy are also to blame.

– World leaders should prioritise peace and diplomacy and helping the global poor. Instead of an arms race to death and destruction we need a race to save and protect humanity. 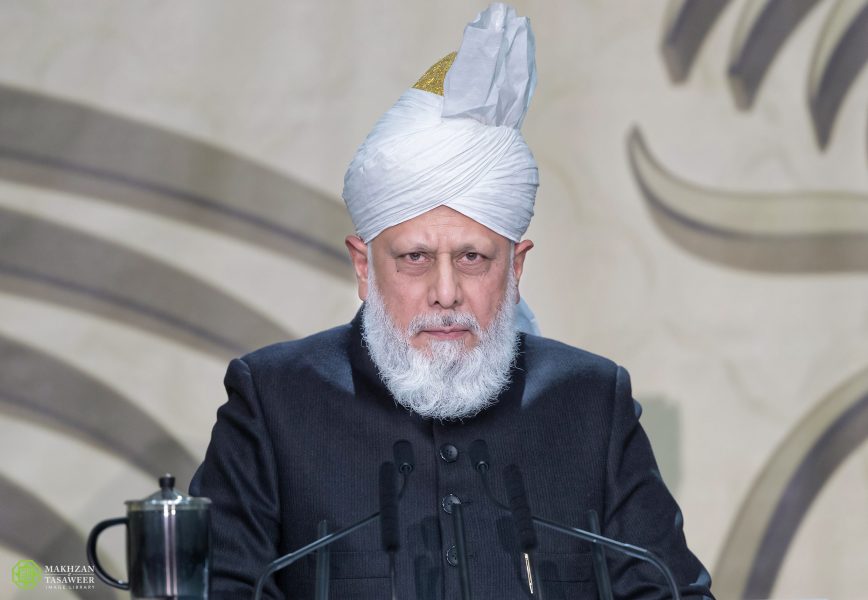 Firstly, the point about the poorest people being too concerned with feeding their kids for today to worry about climate change really struck a chord with me. I’m going to write a post inspired by this point.

More broadly, it was interesting to learn that this faith group exists and to hear about their views directly. I think most people in the UK and US are pretty ignorant about Muslims – I don’t even mean bigoted necessarily, but just in terms of not knowing much. Many people think they are violent or at least regressive in their views, so Islamophobia is rife. But also, people like me, socially liberal people who stand up against Islamophobia, usually do so out of a vague belief that surely a group of people that large and diverse (1.6 billion people across all parts of the world) can’t be painted with the same negative brush, or perhaps empathy based on the one or two Muslims we know personally. But we usually don’t know much about the religion and its different sects and internal complexities.

Anyway, I hope you found this post eye-opening – I know it’s a bit different to my normal content, so I welcome your feedback on whether you’re interested in this sort of thing. I’m planning a post on the global poor and climate change and am going to try to get an interview with IAAAE.