What a typical day at London’s largest mosque, Baitul Futuh in Morden, is like 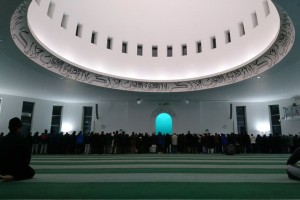 There are more than one million Muslims in London, many of whom were born and bred here.

According to the last census in 2011, 5 per cent of our city’s population is Muslim, but there are still lots of damaging stereotypes and misconceptions about the Islamic faith.

The recent media frenzy around Shamima Begum, the IS bride who left London to join the Islamic State in Syria at the age of 15, has done nothing to help the image of Muslims living here.

But the fact is, most London Muslims live normal, peaceful lives. They get the Tube to work, struggle to pay rent and moan about Brexit along with the rest of us. They also have to battle negative stereotypes about their faith on a daily basis, despite the fact most Londoners have never set foot in a mosque.

So to dispel some of the myths around Muslims we’ve lifted the lid on London’s largest place of Islamic worship, the Baitul Futuh Mosque also known as “the Morden Mosque”, in Morden, South London.

While the majority of London Muslims belong to to the Sunni and Shia branches of Islam, the Morden mosque, which is the biggest in Western Europe, belongs to the Ahmadiyya community.

We spoke to Ahmadiyya Muslim, Farhan Khalid, 24, who volunteers in the Ahmadiyya Muslim Association UK (AMA UK) outreach team. The software consultant moved to New Malden, Merton 10 years ago from Belgium and spends he’s free time working to “promote the true and peaceful teachings of Islam.”

He recently helped organise an open day at the 13,000 capacity Baitul Futuh Mosque for members of the public. He gave us a run down of a how a typical day at the largest mosque in Western Europe goes and debunked some of the biggest myths surrounding Muslims.