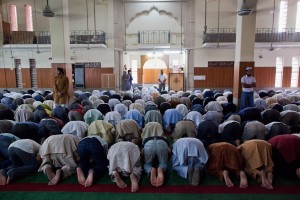 A web of extremism percolates outwards from Pakistan into communities in the UK.

Last month I presented to the All-Party Parliamentary Group (APPG) on Ahmadiyya Muslim communities, and the discrimination that many Ahmadis experience in terms of both anti-Muslim prejudice and intra-Muslim bigotry.

Regarded as “heretics” by both Sunni and Shia Muslims, the Ahmadis have had an uphill struggle even to be heard within mainstream Muslim communities in the UK.

To understand the plight of Ahmadi Muslims one first has to understand the deep-rooted discrimination that emerged in Pakistan under the premiership of Zulfikar Ali Bhutto.

Pressed by hardline religious zealots, Pakistan’s parliament adopted a law declaring the Ahmadi to be non-Muslims and, under the dictatorship of General Zia-ul-Haq, the Ahmadi were effectively banned from calling themselves Muslims or “posing as Muslims”.

Both of these laws ostracised and marginalised Ahmadis, relegating them to the fringes of Pakistani society while detaching the country from any historical or cultural association with Ahmadi communities.

In May 2018 the leaders of Oxford’s Pakistani Society refused to support the showing of a film on the life of Mohammad Abdus Salam, Pakistan’s first Nobel Laureate, who was awarded the prestigious honour for his work in physics. He seems to have been expunged from the collective Pakistani memory simply for being Ahmadi.

At the recent APPG Shahbaz Taseer also gave a talk. A son of murdered Punjab governor Salman Taseer, Shahbaz spoke about the scale of Islamist extremism that has seeped into Pakistani civil society. He told of how such extremism has also seeped into Barelwi communities in Pakistan, which traditionally have demonstrated Sufi influences.

Taseer further highlighted that Mumtaz Qadri, the bodyguard and killer of his late father, had been a Barelwi Muslim who had murdered Taseer’s father because of the latter’s defence of Asia Bibi, a Christian woman accused of blasphemy. Sentenced to death for the murder, Qadri was executed in 2016. He has been repeatedly lionised as a “ghazi” or “warrior in Islam” in Pakistan, through Urdu songs, poems and literature. Strip away the glorified language, however, and you get the reality that millions of people in Pakistan thought he was a martyr for murdering a politician who had simply defended a Christian woman labelled a blasphemer.

Shahbaz Taseer was himself kidnapped by Islamist extremists in broad daylight in Lahore, and held in Waziristan for more than four years before being released. Taseer was scathing in his description of how defenceless Ahmadi and minority communities are being used as political pawns by Pakistani politicians.

There is also one telling statement he made that shows the utter banality of Islamist extremism. As part of the negotiation process for his release, Taseer’s kidnappers contemplated swapping him for Qadri, who was in prison. However, when they realised that Qadri was a Barelwi Muslim they dropped that idea and instead labelled him a “kafir” or unbeliever. This “Life of Brian” moment further shows the sick and twisted nature of such extremists.

So you may ask, what is the connection with the UK? Well, herein lies a web of extremism which percolates outwards from Pakistan and into certain sections of settled communities of Pakistani heritage in the UK.

In the same year as Salman Taseer’s murder, a Glasgow-based shopkeeper, Asad Shah, decided to write his thoughts and views on Islam on his Facebook page. An Ahmadi Muslim, Shah ruminated on faith and belief in Islam and claimed to be a prophet. The real reasons behind this are unknown, though Shah may well have been reflecting on the role of a Prophet. These musings were to start a chain reaction that ultimately led to his brutal murder by Tanveer Ahmed, an Uber driver from Bradford, who drove to Glasgow and confronted Shah in his shop.

Ahmed chased Shah into the street and stabbed him multiple times and stamped on his head. At Ahmed’s trial he claimed he found Shah’s claim to be a prophet blasphemous, and that he believed that he had to defend the “finality” of the last Prophet (Muhammad). The way Ahmed chose to do that was to murder a defenceless and harmless man on the streets of Glasgow.

One would think that this would be the end of this brutal affair. Yet Tanvir Ahmed’s actions were also lionised, this time by an unknown cleric in Lahore called Khadim Hussain Rizvi. Sensing a growing shift towards the use of blasphemy as a campaigning tool, the politically astute Rizvi began praising the actions of Tanvir Ahmed in Friday sermons to hundreds of young men in mosques.

In one video, Rizvi is heard describing the number of times Ahmed stabbed Shah, and then describes in detail the abuse of Shah’s body that took place as well as the way that Ahmed had tried to get away. In the background you can hear the chants of many young worshippers, shouting “Allahu Akbar!” or “God is great!” as Rizvi describes the manner in which Shah was killed.

Following these sermons, videos of Qadri and Ahmed were circulated via Rizvi’s Facebook, YouTube and Twitter channels, with the suggestion that their actions should be copied by “true Muslims”. In other words, Rizvi was providing a religious edict for blasphemers against Islam to be murdered anywhere they could be accessed. It was a similar call to that that has been made by ISIS.

Khadim Hussain Rizvi has in effect come from nowhere but has managed to use blasphemy as a tool to mobilise hundreds of thousands of people in Pakistan. In September 2017 Rizvi’s political party, Tehreek-e-Labaik Ya Rasool Allah (TLP), garnered 7,000 votes in a municipal election in Lahore.

However, within two months, this wheelchair-bound cleric was to mobilise over 100,000 people in a dharna or sit-in against what they suggested was a change in the statute of Ordinance Twenty, thereby giving equality to Ahmadi citizens of the state. This is a law that was implemented by Zia-ul-Haq, which took away the right for Ahmadis to call themselves Muslims in Pakistan. Zia-ul-Haq was closely aligned with autocratic states like Saudi Arabia and reveled in being accepted by the Saudi’s, who were the self-declared ‘custodians of the two Holy mosques’ of Mecca and Medina. He was also heavily influenced by Wahabbi Islam and which uses allegations of heresy as a means of protecting the form of Islam which they practiced. This allied with many in the Ulema or religious leadership in Pakistan who lobbied for the alienation of Ahmadis, meant that he could also garner further political and religious support from these zealots.

Rizvi mobilised a march from Lahore to Islamabad, crippling the state with a lockdown of Islamabad. The actions of this Islamist extremist cleric shook the government of Pakistan, which had to negotiate with him to ensure that the disruption came to an end. Somewhat sickeningly, military leaders handed out money to Rizvi’s supporters in order to disperse crowds, and the head of Pakistan’s notorious intelligence service (the ISI) had to give assurances that no violence would ensue after the dispersals.

The hardline Islamists had, in effect, held a country to ransom because they did not want equality with fellow citizens who happened to be Ahmadi.

Furthermore, during the lockdown by Islamist zealots in Pakistan, numerous imams in the UK re-circulated propagandist material distributed via Rizvi’s social media channels. Imams from Barelwi through to Deobandi Islamic traditions regurgitated Rizvi’s material on their Facebook and other social media pages, in effect legitimising and mainstreaming an Islamist extremist who has wallowed in detailing to Pakistanis how Asad Shah was brutally murdered.

These imams were, in effect, circulating material from a man who had called for the head of anyone deemed to have blasphemed Islam. It was as if age-old discrimination against Ahmadis resurfaced openly in the UK with added legitimacy from UK-based clerics.

There are many other examples of this hatred towards Ahmadis. To cite just one, take the fact that, within the last year, members of the Ahmadi community have informed me of a new practice that has taken root in the UK, which seeks to marginalise their voice. When members of the community have asked to be represented on a Standing Advisory Council on Religious Education (SACRE) within local authorities, councillors have then been lobbied by other Muslims to remove them from office. Leaders and council chief executives have been lobbied to the extent that they would lose support from Muslim communities if Ahmadis were represented on these bodies.

Political expediency and a liberal outlook “not to rock the boat” have also meant that this vulnerable community has been locked out of having its voice heard. Furthermore, such is the level of fear of being targeted by Islamist and far-right extremists that Ahmadis feel, enter an Ahmadi mosque and it resembles a synagogue in terms of its security arrangements. It is surely a damning indictment of where our country is in the fight against extremism when both such communities have to worship under severe lockdown conditions.

More recently, however, things have got much worse for Ahmadis in Pakistan, and even more depressing. My father was born in the Punjab district of Sialkot, an area where historically the public never showed any signs of extremism. Sialkot was always materially well-off compared to other parts of Pakistan and its population hard-working. Extremism had never really become entrenched in the region. Yet on the 23 May this year, a local imam by the name of Hafiz Hamid Raza incited locals to carry out a sectarian attack on a local Ahmadi mosque. He was heard on video inciting the mobs as they tore the mosque apart, brick by brick.

Raza, it has transpired, visited the UK in 2014 and spoke at a conference in Derby held by Khatme Nubuwwat, a conservative Muslim group which has previously hosted speakers who attack Ahmadi beliefs. A cursory look at the website of the ‘Khatme Nubuwwat Academy’ displays the following language used to describe Ahmadi Muslims: “kafir” – a term that is intimidating with hostile connotations. The site also lists a quote allegedly taken from the poet Allama Muhammad Iqbal, stating, “Ahmadis are traitors both to Islam and to India”.

You would think that given the fact that Raza visited the UK and was involved in the incitement of a bigoted mob that literally tore apart a faith institution, Muslim-focused UK organisations may have spoken up on this matter. Were there calls for Raza to be banned from the UK? Were there letters from these organisations to the Home Secretary asking for his entry to be denied? Were there howls of Islamophobia? Not a single mainstream Muslim organisation mentioned anything. It was as if the Ahmadis don’t exist and the destruction of a mosque – in itself an act of intra-Muslim and anti-Muslim bigotry – was simply brushed under the carpet.

For over six years I have had abuse and threats levelled against me by anti-Muslim bigots for my work on countering anti-Muslim hate. Yet Islamists and bigots within small sections of Muslim communities have also carried out co-ordinated abusive and threatening campaigns against me as a result of my having repeatedly highlighted the deeply entrenched prejudice, bigotry and hate of such groups towards Ahmadi Muslims. The last three years have seen anti-Ahmadi hate spill outwards to take root in the minds of younger groups of Muslims.

Yet the strange irony of all of this is that the pluralism that such individuals enjoy and reap the benefits of is the very enfranchisement that they want to take away from the beleaguered British Ahmadi Muslim community. You see, the problem for these bigoted individuals is simple: Ahmadis are not only infidels and heretics – they should not be seen or heard. God alone knows where this will end.