On 2 March 2016, over 70 guests including members of Parliament, Lords, Embassies, leading British charities and men & women from various walks of life converged in the heart of London, in the Cholmondeley room and terrace in the Houses of Parliament. This diverse group was brought together by the leading Muslim youth organisation in the UK, the Ahmadiyya Muslim Youth Association (AMYA), for its annual ‘Mercy for Mankind’ Parliamentary reception.The ‘Mercy for Mankind’ campaign is a charitable initiative conceived by AMYA which consists of various events aiming to contribute to British society financially, socially and environmentally.

Through its various activities, AMYA has this year alone raised a staggering £400,000 for 42 British charities, bringing its total to over £2 million. The fundraising for this past year alone consisted of store collections across the UK, a Paris to London cycle, a Bavarian Alps hike, a London Hyde Park & Manchester Heaton Park 10K run and a number of various regional activities.During the reception, charities including the Royal British Legion, Barnardo’s, British Heart Foundation, British Red Cross, Save the Children, Marie Curie and Great Ormond Street Hospital were presented with cheques which will go a long way in furthering their charitable missions.
The event was attended by a number of leading politicians including Tim Farron, the leader of the Liberal Democrat party, who after hearing of the work of AMYA, said:“You have made a massive difference for integration and community cohesion across the United Kingdom because of your commitment to acts of good and service to peace.”

The inspiration for the 5,000 volunteers of AMYA to partake in this campaign year in and year out is very simply their faith. The campaign’s name is sourced from the Holy Qur’an, in which the Holy Prophet of Islam, Muhammad (peace be upon him) was referred to as a ‘Mercy for all Mankind’. The youth hope to not only fulfil their religious obligation of helping those in need, but further wish to fulfil their duty to their fellow countrymen. Through their tireless work they have sent a message of peace and harmony, they have displayed a true passion and yearning for contributing to British society.This was echoed by Sylvia Pilling, a victim of the Cumbria Floods who was provided with essential help during a perilous time by the youth of AMYA, Sylvia said:
“I have never seen such dedication and I’m absolutely overwhelmed at the selflessness of the people who came … I’m absolutely grateful for everything they did … more people ought to know about this section of the Muslim community and what they do.”

Ann Little, Head of fundraising for Barnardo’s spoke of the longstanding relationship with AMYA saying:“The work that AMYA does in supporting Barnardo’s is quite phenomenal. What is so special is that it is the young helping the young. AMYA provide an exemplary example of mentoring their youth and breaking down negative stereotypes. They turn up in all weathers for store collections but most importantly they are always smiling. My whole team absolutely love working with the volunteers.”

National AMYA President, Mirza Waqas Ahmad said: “The motivation for our work is our religion, Islam, but today Muslims are in the press for the wrong reasons and our religion is being hijacked by those who profess to follow it but nothing could be further from the truth. The truth is that Islam has taught us that serving others is a great means of getting God’s love and nearness. Indeed our religion itself is the very motivation and inspiration underlying the objectives of our work. ”AMYA also received a special message from the Worldwide head of the

Ahmadiyya Muslim Community, the Caliph, Hazrat Mirza Masroor Ahmad:
“The very name of the Ahmadiyya Muslim Youth Association means to serve and so this spirit of serving others should forever remain ingrained in all of its members.Keeping all of this in view, I would like to assure all the dignitaries and guests in attendance that as loyal citizens of this country we Ahmadi Muslims will always seek to help those who are in need and will fully co-operate with all organisations that are involved in humanitarian relief.” 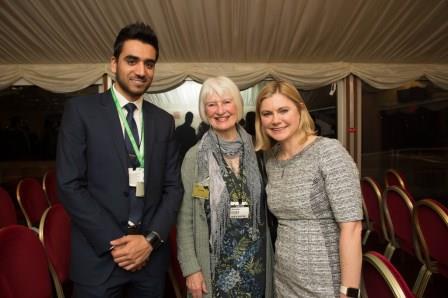 James Berry MP, Kingston and Surbiton:
“We have a vibrant AMYA branch in Kingston and I’ve been out with them on action days, cleaning up the streets in Surbiton and New Malden. They are a really important part of our community and really showing the way in terms of voluntary work and charity work.”

Margaret Ferrier MP for Rutherglen and Hamilton West:
“Such generosity and benevolence is not too common place and I believe the Ahmadiyya Muslims involved deserve enormous commendation. When interviewed during the Cumbria flooding an Ahmadiyya Youth Leader said that he volunteered as he wanted to give back to a country that has given him so much. I believe such attitudes are most welcome in a multicultural, diverse society. The association has shown not only are young Muslims proud of the UK but also that they go out of their way to contribute. Islam teaches one to serve humanity and the society they live in. I believe the Ahmadiyya Muslim Youth Association are an absolute credit to their faith.”

Aileen McConnell, Glasgow Children’s Hospital Charity:
“Throughout the year AMYA have supported us through their 5k fun run, with bags packs, bucket collections and volunteering at events. AMYA have been an absolutely fantastic support to our charity for several years now. It’s been wonderful to see the work that AMYA do throughout the UK. It’s not just the funds they raise but the awareness they raise for the charities and the huge amount of time and effort these young people are putting in to help others.”
http://www.muslimsforhumanity.org.uk/2016/03/uk-muslim-youth-raise-2-million-charities/