His Holiness presided the meeting from his office in Islamabad, Tilford, whilst the National Amila members joined from the Wahab Adam MTA Studios at Bustan-e-Ahmad in Accra.

During the eighty minute meeting, all present had the opportunity to speak to His Holiness and the National Amila members were able to present a report about their respective departments and to receive the guidance and instructions of His Holiness on a range of issues.

Due to his personal connection with Ghana, where he lived and served the Ahmadiyya Muslim Community for eight years, His Holiness personally recognised and knew many of those present, some of whom had been young children during his time in Ghana.

As the meeting commenced, His Holiness instructed that outreach efforts to spread the message of true Islam (Tabligh) should increase in Ghana and should not be hindered by the COVID-19 pandemic.

“Even amidst the pandemic it is possible to convey the message of Islam to others. If you cannot hold large gatherings, then focus on meeting people on an individual level and engage more Ahmadi Muslims in this effort to spread the teachings of Islam at a personal level.”

His Holiness instructed that efforts should be made by the Umoor-e-Kharija Department (External Affairs) in Ghana to guide the country’s leaders about utilising the country’s natural resources in a way that helps alleviate poverty and raises the living standards of the people of the country.

“The Umoor-e-Kharija department should maintain personal contacts with the politicians and leaders of the country and make them realise and understand that they should work sincerely for the betterment of the nation so that the country can prosper and flourish. Ghana has been blessed with many natural resources and so encourage the politicians to utilise these resources in a way that truly helps the country and its people and improves the socio-economic and political conditions of Ghana and its people.” 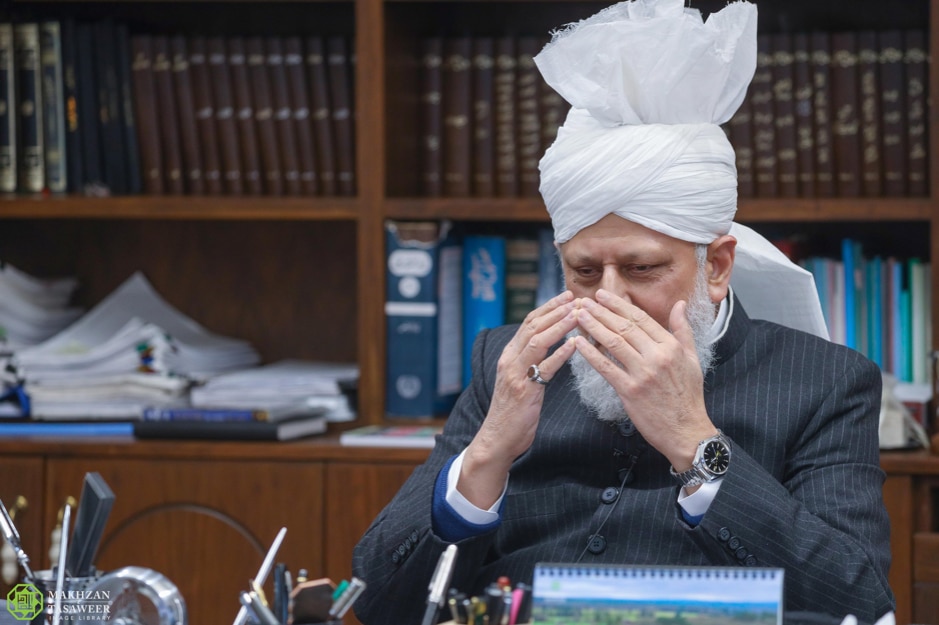 His Holiness also spoke affectionately to several young Ghanaian life devotees of the Ahmadiyya Muslim Community who had recently graduated as Missionaries. His Holiness encouraged them to seek to better their grasp of the Urdu language so that they could read the books of the Promised Messiah (peace be upon him) in their original form. In this regard, His Holiness stated they should read excerpts of the writings of the Promised Messiah (peace be upon him) daily and also write to His Holiness in Urdu on a regular basis.

As the meeting concluded, the National President and Missionary in charge of the Ahmadiyya Muslim Community in Ghana, Maulvi Mohammed bin Salih sought the prayers of His Holiness for the forthcoming Presidential election in Ghana due to take place on 7 December 2020.