At several War Memorials and Cenotaphs in Lanarkshire, Scotland, Mr Abdul Abid, Deputy Lord Lieutenant, on behalf of Her Majesty The Queen, laid wreaths on Remembrance Sunday.Mr. Abdul Abid is a member of the Ahmadiyya Muslim Community UK. 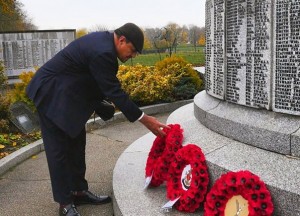 The first wreath was laid at a scaled back ceremony held in Cippenham where Reverend Jason Griffiths held a short service of Remembrance before a small number of representatives made their way to the War Memorial.

The ceremony itself was attended by the President of the Ahmadiyya Muslim Community Slough Atiq Ahmad Bhatti, alongside the General Secretary and Youth Leader.

The second wreath was laid in Burnham Village shortly afterwards.

The Ahmadiyya Muslim Community has laid wreaths on Remembrance Sunday for many years now and this usually succeeds their annual Poppy Appeal collections for the Royal British Legion branches of Burnham and Cippenham. Sadly it was not possible this year.

President of the Ahmadiyya Muslim Community Slough, Atiq Ahmad Bhatti said: “This time of year is one of heartfelt remembrance for those who gave the ultimate sacrifice for our tomorrow. This year is all the more poignant due to the coronavirus pandemic and the fact that some of us have lost those close to us, and thus the message and act of Remembrance is all the more pertinent.

“It is not only humbling but a great honour for the community to lay wreaths every year on Remembrance Sunday. We are looking forward to 2021 where we may double our efforts for the annual poppy appeal that precedes Remembrance Sunday.”

A VIRTUAL remembrance service was held by the Ahmadiyya Muslim Association in Leamington Spa. 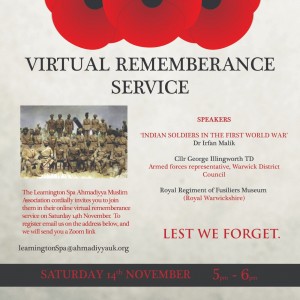 Speakers included Warwick District councillor and armed forces representative George Illingworth, a speaker from the Royal Regiment of Fusiliers Museum and Dr Irfan Malik who will spoke on the topic of ‘Indian Soldiers in the First World War’. 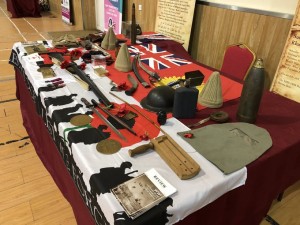