“Now is the time to show our humanity and to spare no efforts in developing peace in our communities, in our nations and indeed throughout the world” – Hazrat Mirza Masroor Ahmad

On 20th October 2018, the World Head of the Ahmadiyya Muslim Community, the Fifth Khalifa, His Holiness, Hazrat Mirza Masroor Ahmad inaugurated the Baitus Samad Mosque in Baltimore, USA before delivering the keynote address at a special reception held to mark its opening. 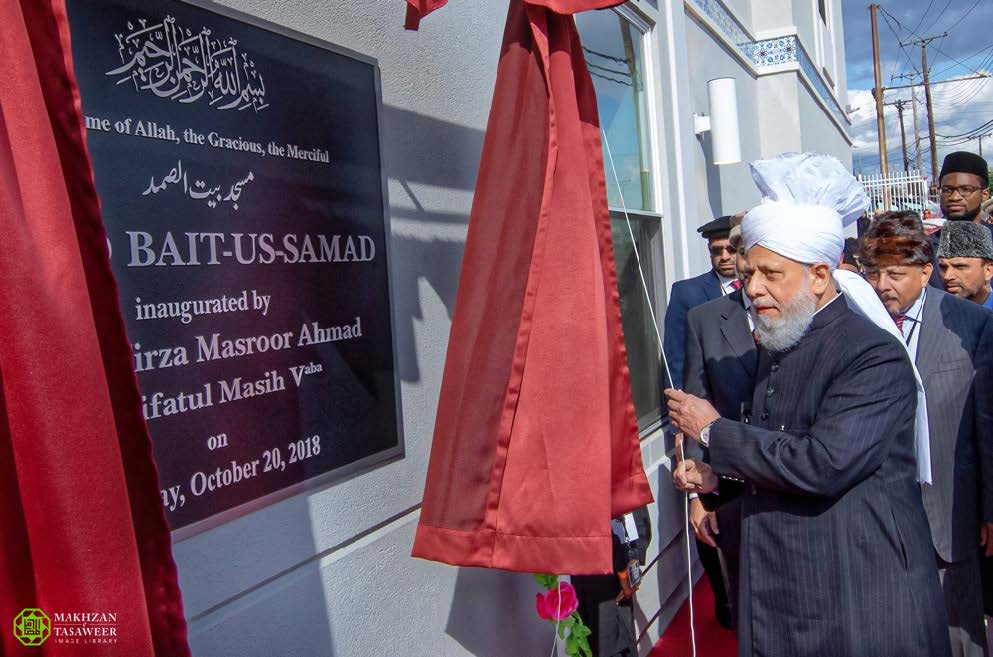 Upon arriving in Baltimore, His Holiness officially inaugurated the Baitus Samad Mosque by unveiling a commemorative plaque and offering a silent prayer in thanks to God Almighty. Thereafter, His Holiness led the Zuhr and Asr prayers at the Mosque and inspected the new premises.

Later, 500 people attended a special reception held at the Hilton Hotel, Baltimore, including 320 dignitaries and guests.

During his keynote address, Hazrat Mirza Masroor Ahmad explained the objectives of Mosques and said that true Mosques were centres of peace, where Muslims joined together in order to worship God Almighty and to serve humanity, irrespective of faith or belief. 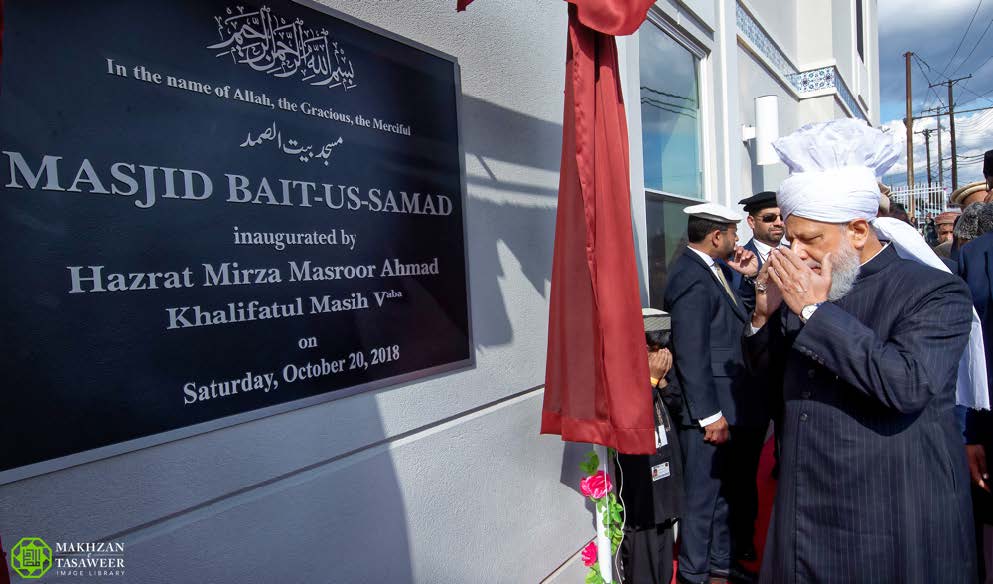 His Holiness also called on mankind to unite and to foster peace in society, rather than exacerbating tensions and conflicts that have ignited in much of the world in recent times. 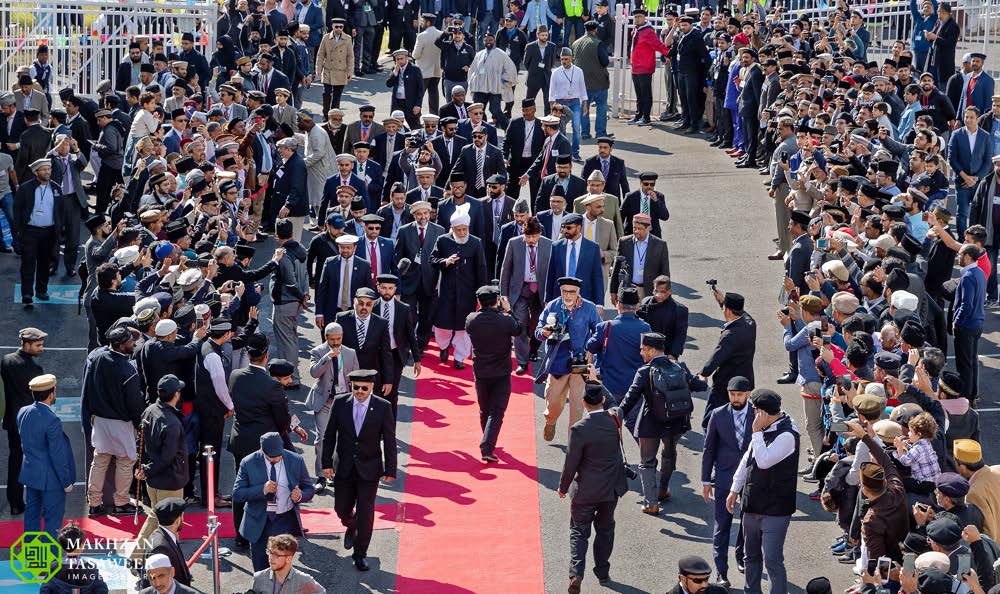 At the beginning of his address, His Holiness said that it was not surprising that some people feared the Mosque or harboured concerns about Muslims due to the incessant negative portrayal of Islam in the media.

“Many people fear that a Mosque will provide Muslims with a centre to isolate themselves from the rest of society and to undermine the peace and well-being of the local town or city or even of the nation itself.”

“I have personally seen that such fears do exist amongst many people in the non-Muslim world and regrettably such angst and suspicion of Islam and its followers continues to rise. Nevertheless, the truth is, and will always remain, that Islam is completely opposed to all forms of extremism, terrorism or violence.” 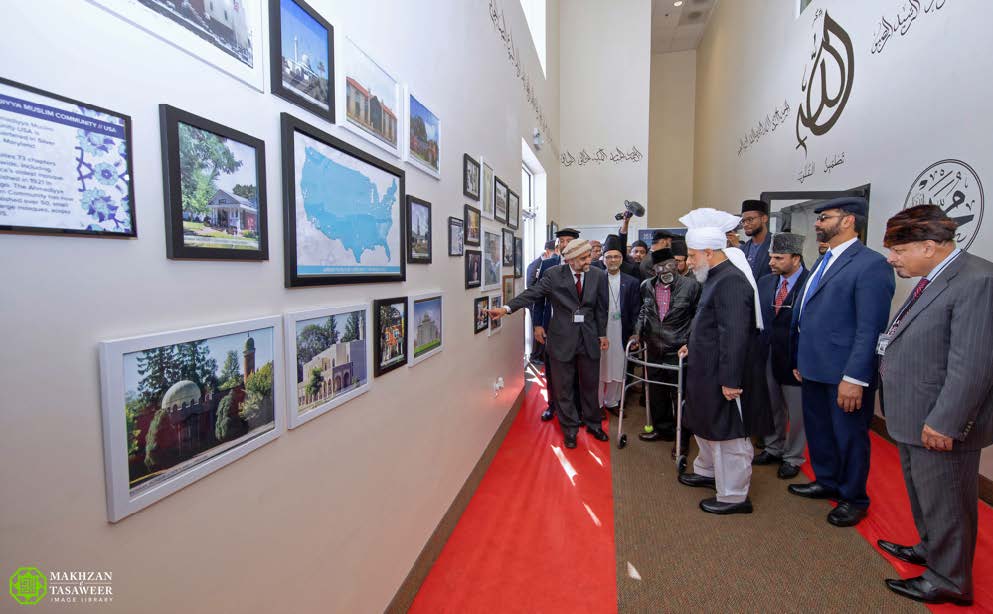 “Islam condemns in the strongest possible terms any attempts to violate freedom of belief and freedom of conscience. Under no circumstances does Islam permit coercion or force in the matter of religion. Rather, Islam teaches that religion is a matter of the heart. Thus, I firmly believe that the widespread and common perceptions of Islam amongst non-Muslims, are actually misconceptions.” 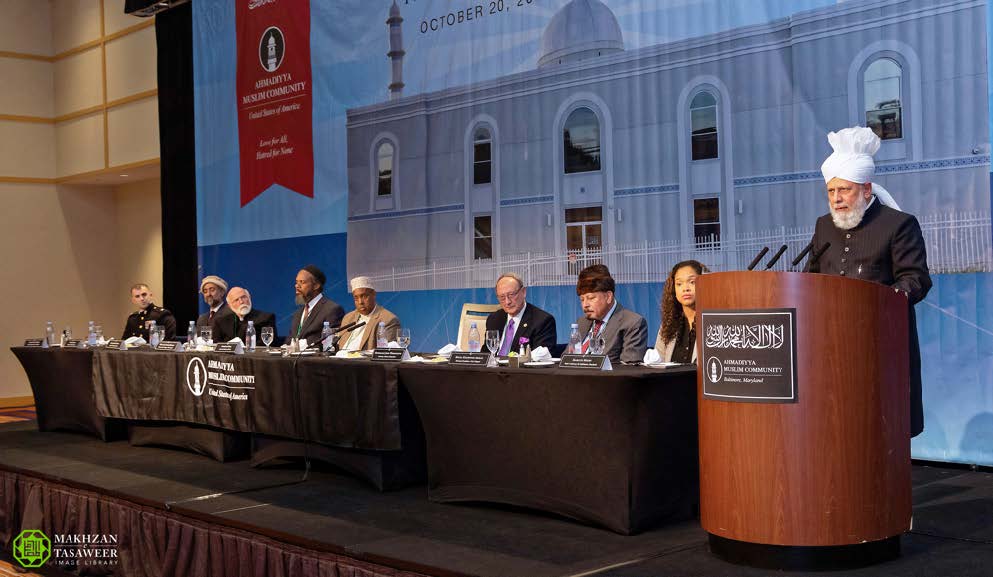 His Holiness alleviated fears associated with the building of Mosques by clarifying objectives of all true Mosques. His Holiness said where Mosques allowed Muslims to congregate for prayers and strengthen ties of kinship and unity with one another, Mosques also served as a means of “introducing non-Muslims to the teachings of Islam and to fulfil the rights of the wider society.”

“Instead of destroying the peace of society, true Mosques are built to foster peace between the peoples of different communities and beliefs. In short, Mosques are a place for Muslims to elevate their bond with their Creator, God Almighty and to fulfil the rights of their fellow human beings. Any Mosques that do not fulfil these paramount objectives are worthless and merely hollow shells that serve no purpose.” 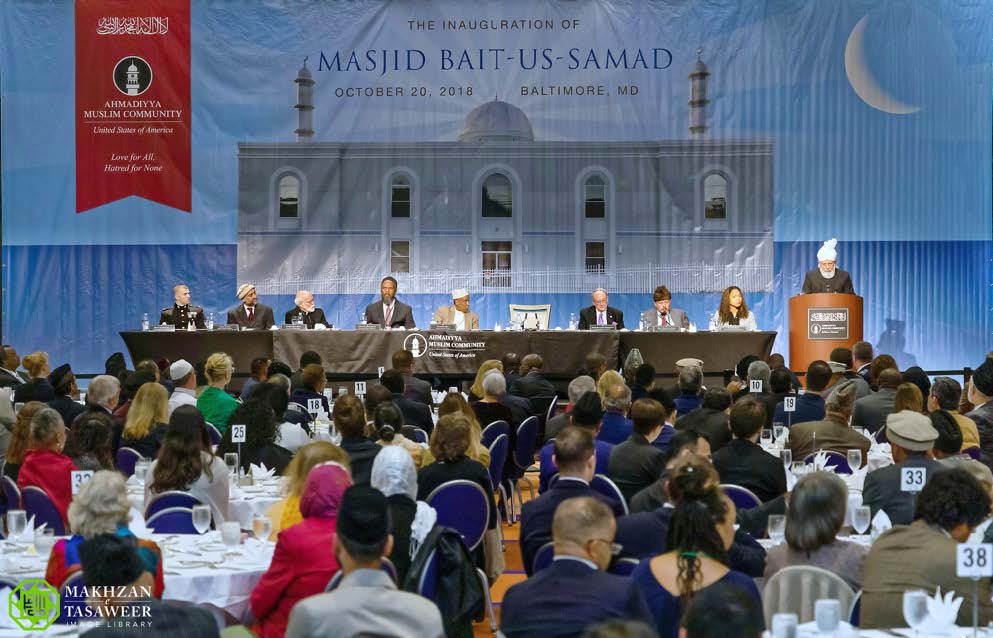 His Holiness said that the history of the Ahmadiyya Muslim Community bore testament to the fact that wherever Ahmadi Muslims build Mosques, they fulfil the true objectives of Mosques.

“We seek to build ties of friendship with non-Ahmadis and non-Muslims. We strive for inter-faith dialogue.  We value and cherish our neighbours. We are ever ready to help those who are in need. We champion the rights of the weak and deprived. We are there to serve the community and to be loyal and faithful citizens. This is our faith and this is our teaching. This is why we build Mosques.” 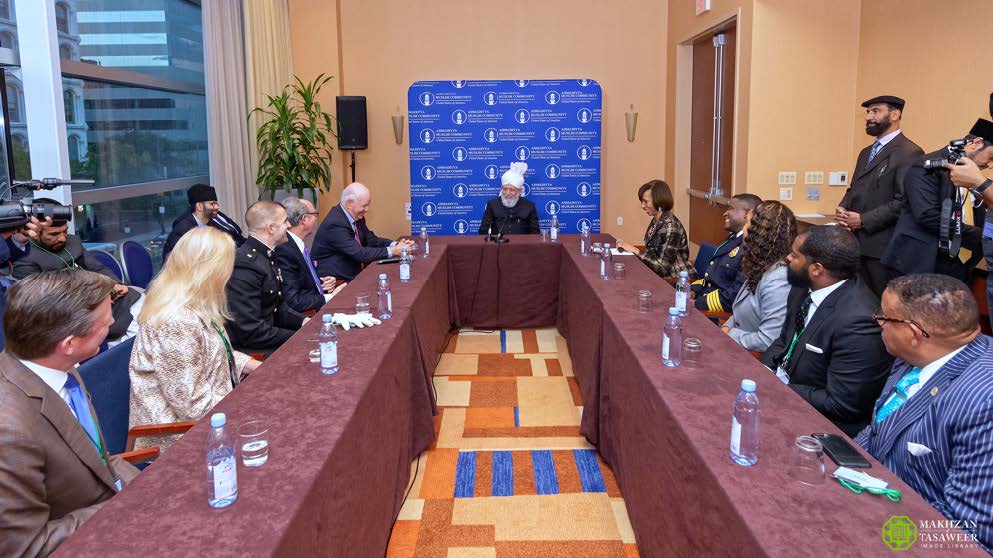 Speaking about the role the new Mosque will play within society, Hazrat Mirza Masroor Ahmad said:

“I am entirely confident that, God Willing, this Mosque will prove to be a symbol of peace radiating nothing but love, compassion and brotherhood throughout the city and far beyond. It will serve as a beacon illuminating its surroundings and spreading light in every direction. It will be a House of Peace in which the worshippers join together to serve their neighbours and to fulfil their rights.” 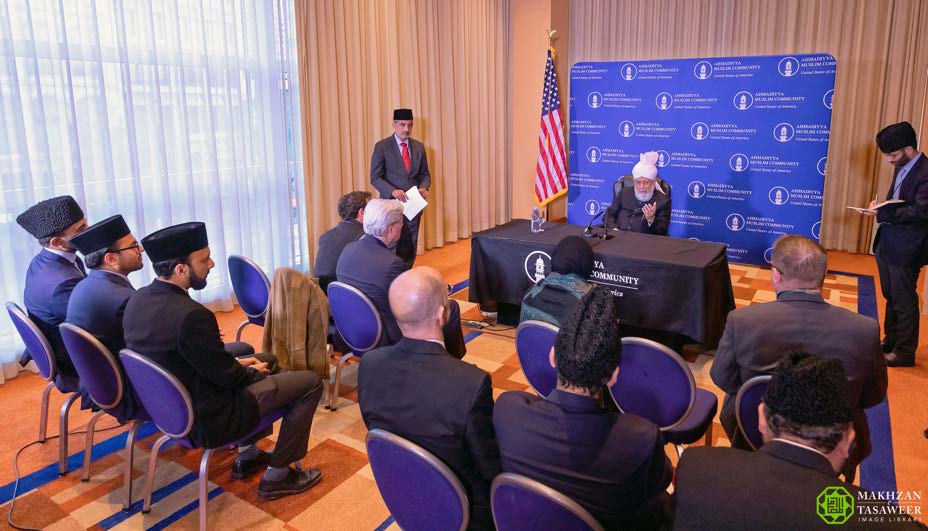 His Holiness said that the local residents around the Mosque will soon see that these words about the Mosque were not “sugar-coated words masking a bitter pill,” rather they “represent the honest truth.” 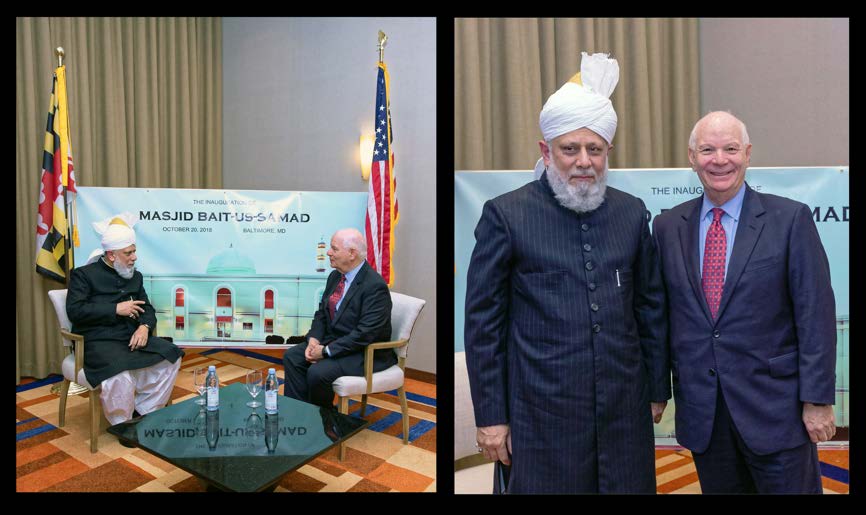 His Holiness went on to say that long lasting peace cannot develop “with the click of our fingers.” Rather, His Holiness said it requires society to unite upon common values whilst exhibiting mutual respect for one another.

“It is up to all members of society, whether Muslim or non-Muslim, whether religious or non-religious, to work together for the peace and prosperity of the world. Rather than making allegations against one another or pinpointing each other’s flaws and weaknesses, we should open our hearts to others and show grace and compassion. Instead of attacking each other’s religions and needlessly provoking one another, it is the urgent need of the time that we exhibit mutual respect and tolerance.” 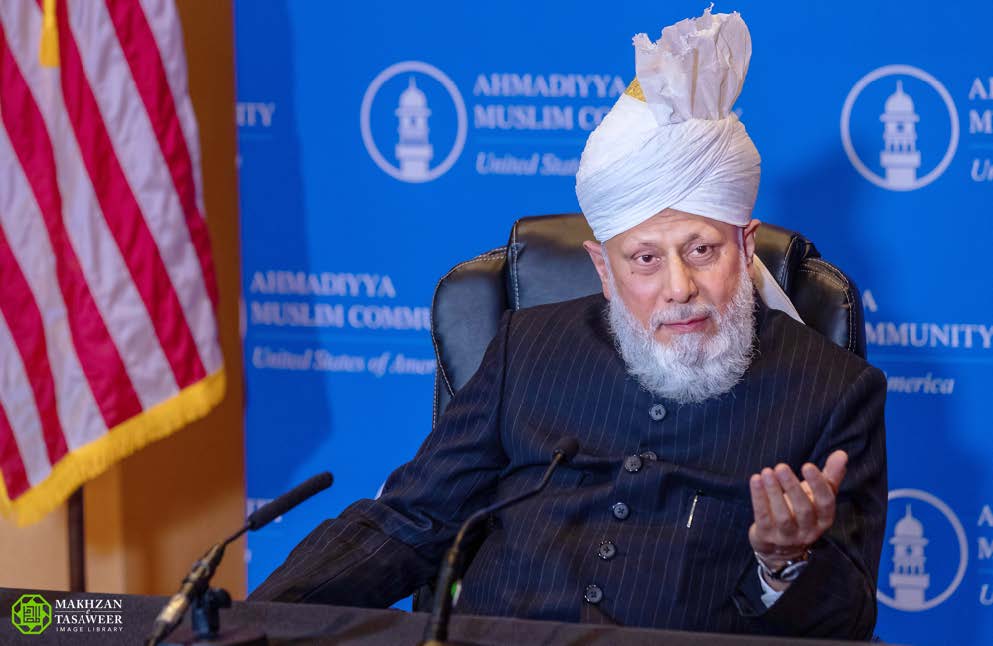 Speaking of the urgent need for mankind to reassess and refocus their priorities, Hazrat Mirza Masroor Ahmad stated:

“I truly believe that we are passing through a critical juncture in the history of the world where, both at a national and international level, the world is becoming increasingly polarised and divided. We stand upon the brink of disaster and so now is the time to take a step back and focus all of our energies on protecting the future of mankind. Now is the time to show our humanity and to spare no efforts in developing peace in our communities, in our nations and indeed throughout the world.” 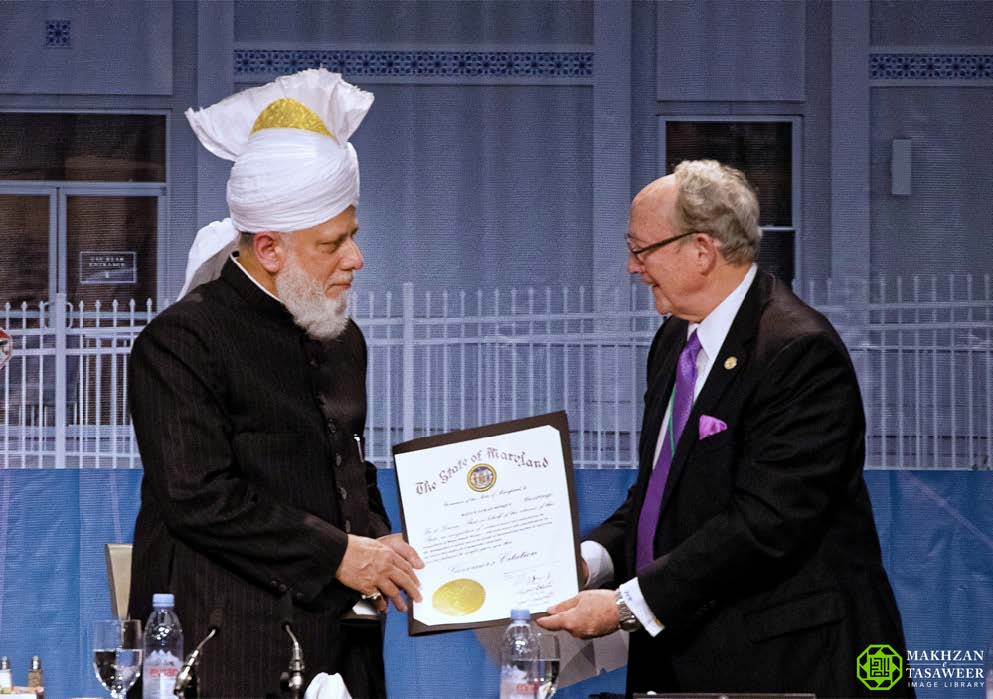 “It is my sincere hope and prayer that all of us, no matter our religion or beliefs, can work together with a spirit of benevolence and mutual respect and that our shared ambition is to make the world a better place for those who follow us.”

Earlier in the evening a range of dignitaries also addressed the audience, whilst the National President of the Ahmadiyya Muslim Community USA, Dr Mirza Maghfoor Ahmad introduced His Holiness prior to the keynote address.

“Your Holiness we welcome you to Baltimore. You honour us with your presence and you inspire us by your leadership. The community that you lead has helped build a stronger and more peaceful Baltimore, Maryland and America and your leadership has been global in communities around the world. Your message of peace and love are just what we needed now more than ever before and you inspire us by your presence and your words here in Baltimore that we all can do better.” 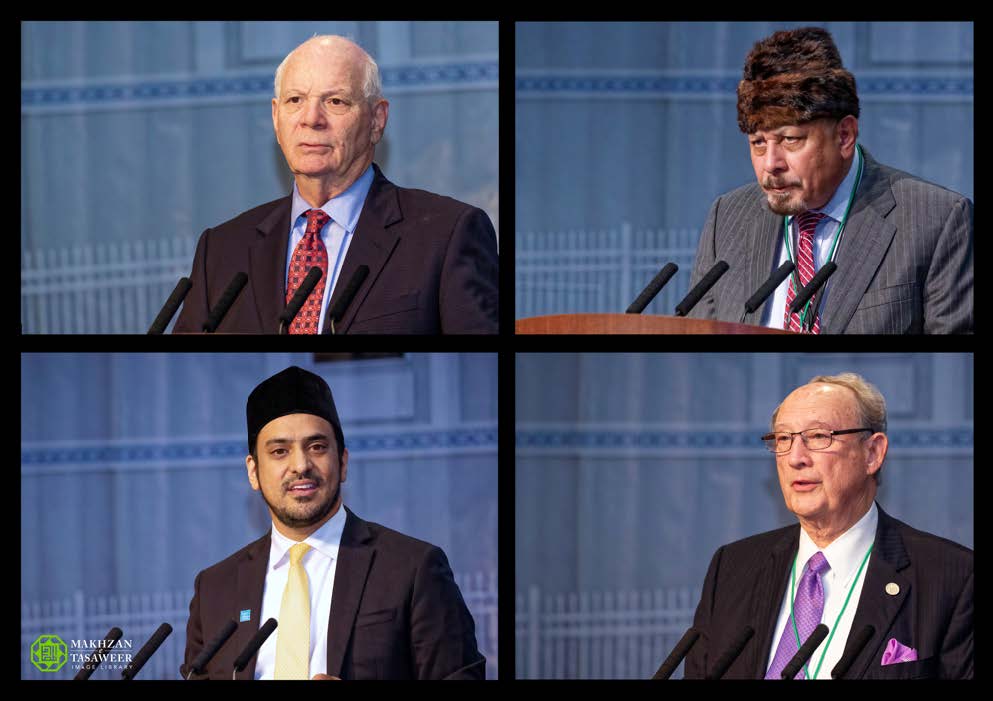 “Your Holiness, your message of service to Humanity for the promotion of peace and justice is most admirable and necessary to help us overcome our many mortal frailties.  This is a message we Muslim or not can all embrace.” 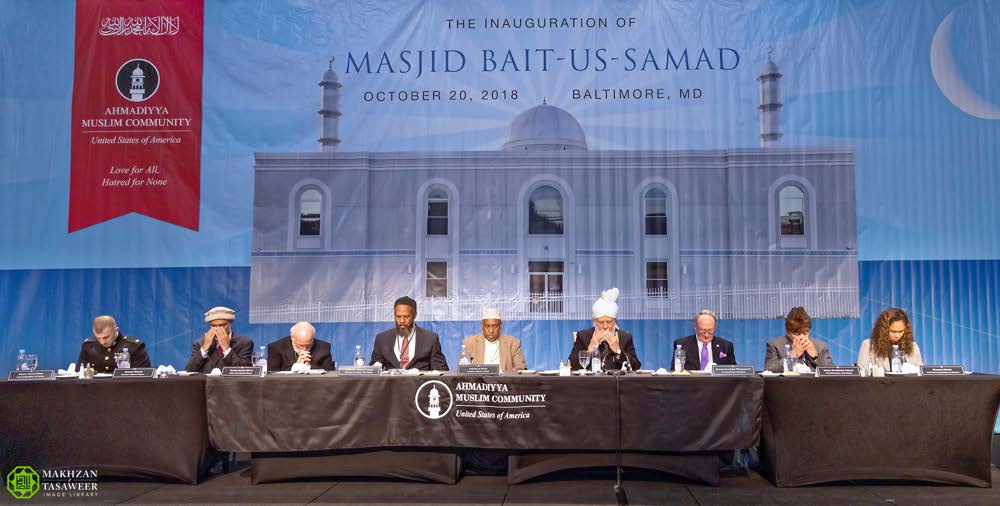 Earlier, His Holiness met with a range of dignitaries privately, including Honourable Ben Cardin and Honourable Catherine Pugh, Mayor of Baltimore. His Holiness also answered questions during a press conference with the assembled media.