English Heritage has recognised the enormous scientific contribution of Professor Abdus Salam by installing a Blue Plaque at his former home in Putney, South London. Professor Salam was the first Ahmadi Muslim to win a Nobel Prize. The plaque reads “Nobel Laureate and champion of science in developing countries”. 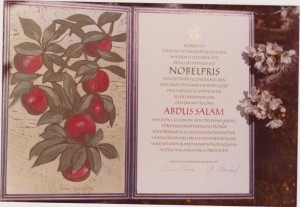 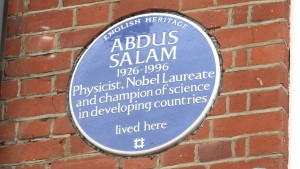 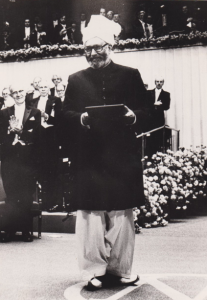 His life’s work was key in defining a theory of particle physics still used today, and it laid the groundwork for the 2012 discovery of the Higgs Boson – the particle responsible for giving all other particles mass. 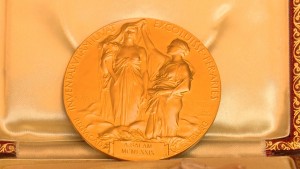 Indeed, Peter Higgs himself in a BBC interview with Prof Jim Al Khalili said he missed out on a Nobel Prize earlier and missed being part of one of physics’ biggest theory – because of an early night.

He says he was at a science meeting in 1960 with Abdus Salam and others where they contemplated ideas that would lead to a “theory of everything” – the Standard Model.

But the discussion went on into the small hours, and Prof Higgs went to bed early. 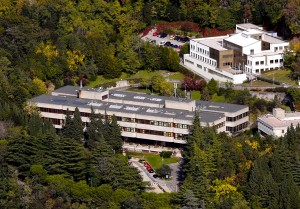 Professor Abdus Salam was awarded a scholarship to St. John’s College, Cambridge, where he took a BA (Honours) with a double First in mathematics and physics in 1949: he was a Wrangler. In 1950 he received the Smith’s Prize from Cambridge University for the most outstanding pre-doctoral contribution to physics. He also obtained a PhD in theoretical physics at Cambridge; his thesis, published in 1951, contained fundamental work in quantum electrodynamics which had already gained him an international reputation.

Salam returned to the newly created Pakistan and found it a barren place for intellectuals. He committed to find a way to solve the heartbreaking dilemma faced by many young and gifted theoretical physicists from the developing countries. In 1964 the ICTP, Trieste, Italy was opened. Professor Abdus Salam instituted the  “Associateships” which allowed the brightest and best young physicists from the developing countries to spend the time at the ICTP in an invigorating atmosphere, in symposia, workshops, lectures and in close touch with their peers in research and with the leaders in their own field.

In 1957 he was offered a Professorship of Theoretical Physics at Imperial College, London, and since 1964 he combined that position with that of Director of the ICTP, Trieste. Professor Abdus Salam always paid tribute to the farsighted and most generous nature of successive Rectors of Imperial College which allowed him to fulfil this duo role.

In November 1996 Professor Salam passed away. His distinguished career has left a mark on generations after him. For example, letters to the Editor of DAWN reads:

“The void created by the passing away of Prof. Dr. Abdus Salam, the internationally famous scientist, scholar and humanitarian, will be extremely difficult to fill and the immense loss, not only to the Third World, but the entire world of scientists, scholars, intellectuals and humanitarians will be almost irreplaceable.” 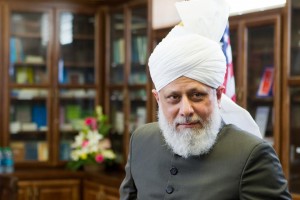 “With the Grace of Allah, the very first Muslim Nobel Laureate was an Ahmadi Muslim, Professor Dr Abdus Salam, an eminent physicist who won the Nobel Prize for Physics in 1979. Throughout his life, Professor Salam spoke of how Islam, and the Holy Quran in particular, was the inspiration and guiding light behind his work.”

An inspiring documentary about the life of Professor Abdus Salam, his work and the Ahmadiyya Muslim Community is available on Netflix: “Salam The First ****** Nobel Laureate”

Awards for contribution to physics

Awards for contributions towards peace and promotion of international scientific collaboration

As “Servant of Peace”