On Sunday 4 April 2021, Matt Cullis from the Langley Green’s Leacroft Medical Centre
visited Noor Mosque, Crawley with a team of NHS staff to set up a pop-up vaccination
centre for the Ahmadiyya Muslim Community (AMC). Matt is the Managing Partner,
Director, of the Alliance for Better Care GP Federation and was accompanied by his team,
consisting of Lena (vaccinator) and Chloe (administrator).

The local AMC president, Adeel Shezad with his team made arrangements for visitors
from the community to have their jabs. This included some front-line volunteers as well all
vulnerable members of the community who had not had their first jab. 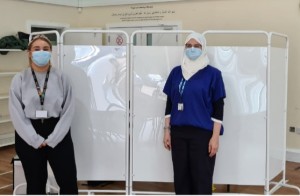 The doors were opened at 10am and the last vaccination administered at around 3:30pm. A
total of 65 individuals were vaccinated on the day.

Matt Cullis was extremely pleased with the set up and the arrangements and commented:

“The facilities were just ideal, with plenty of space for people inside and with ample car parking facility. We were so welcomed by the organisers from the Noor Mosque and well looked after. We have been highly impressed with the positive helpful way of the community.” 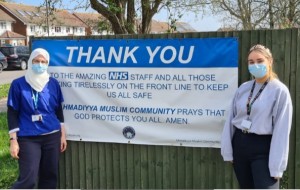 The AMC made arrangements for some light refreshments for the visitors and the NHS staff,
as well as lunch for all the volunteers. 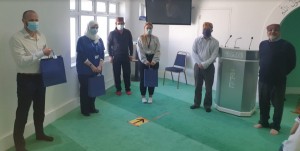 The AMC Regional President , Atta Quddus also attended and helped on the day. Ahsan
Ahmedi, a National Executive member of the AMC, gave a short talk on how Islam promotes
humanitarian efforts and the special works the NHS have been doing during this crisis. Gifts
of chocolates and flowers were presented to the NHS for their special work and effort.