“Our Goal and Objective should be Nothing Less than to Establish Peace in Every Village, Town or City of Every Nation In The World”– Hazrat Mirza Masroor Ahmad 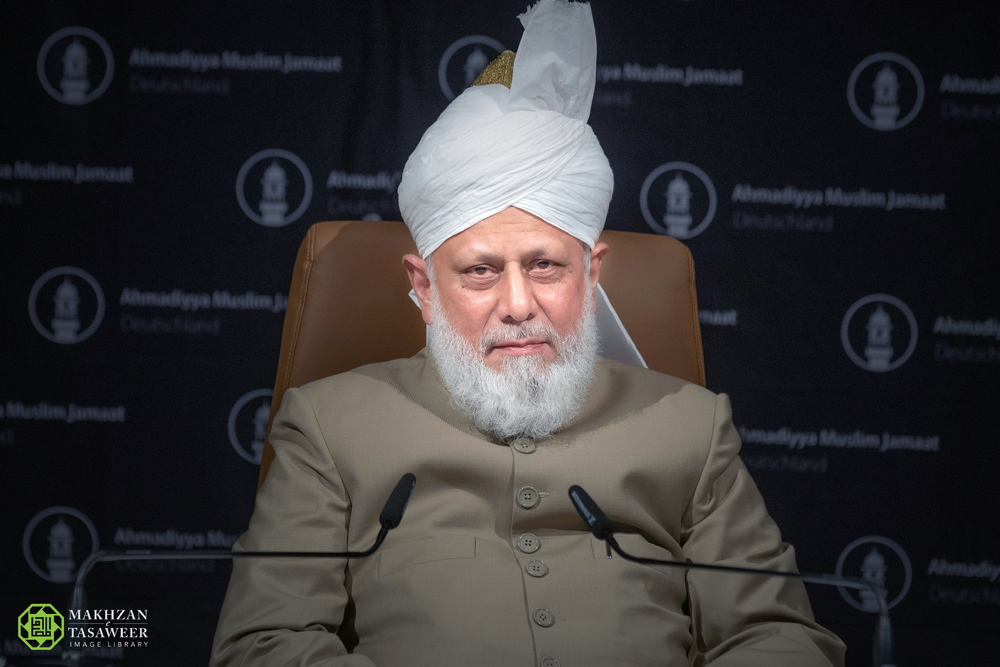 On Saturday, 8 September 2018, the World Head of the Ahmadiyya Muslim Community, the Fifth Khalifa (Caliph), His Holiness, Hazrat Mirza Masroor Ahmad delivered a landmark address about the world’s immigration crisis and the subsequent rise of the far-right in the Western world before an audience of more than 1,000 dignitaries and guests on the second day of the 43rd Annual Convention (Jalsa Salana)of the Ahmadiyya Muslim Community in Germany.

Noting the surge in support for the far-right and nationalism in recent times, His Holiness said that society should not shy away from issues that are leading to division but should seek to tackle root causes that are underpinning such tensions. His Holiness said that wherever there is mass immigration, the authorities should ensure that the rights of the indigenous people are not affected and said that immigrants should seek to enter employment as soon as possible.

During his powerful address, His Holiness made various suggestions, based on Islamic teachings, about how to defuse tensions in society amongst the people of different ethnic and religious backgrounds. His Holiness also responded to, and refuted, allegations that Islam is a violent religion and that Muslims are prone to abusing women due to their faith.

Speaking about a sense of fear gripping Germany and other Western nations due to immigration, Hazrat Mirza Masroor Ahmad said:

“Many local people are afraid that their societies are changing beyond comprehension and they feel that their nation’s resources are being disproportionately utilised in favour of immigrants. Whilst the term ‘immigrant’ is used, the real issue for most people is ‘Islam’ and the fact that the vast majority of immigrants to Europe are Muslims fleeing from war-torn countries in the Middle East.”

His Holiness referred to a recent report that immigrants were guilty of high proportion of sexual crimes in Sweden.

“Sadly, a recent report suggested that a high proportion of rapes or attempted rapes in one Western country were committed by immigrants. God knows better if the figures are accurate but when such reports are made public, it affects other nations as well and the concerns and fears of local people continue to rise.”

“Given this, let me make it categorically clear that any Muslim who violates the honour of a woman or abuses her in any way is acting entirely against Islam’s teachings. Islam considers such behaviour as evil and has mandated exceptionally strong punishments for those guilty of such immoral and reprehensible crimes.”

Further, His Holiness addressed security concerns related to mass immigration and the huge financial undertaking required to re-settle immigrants on a large scale. He said such issues should be directly confronted and debated rationally so that solutions alleviating the fears of existing citizens are formed.

“People who have lived their lives and paid their taxes in a country, are justified to ask whether it is fair that their contributions to the State are spent on resettling foreign immigrants, as opposed to funding projects that are beneficial to existing citizens.”

His Holiness said that the refugees should consider themselves “indebted” to their host nations and its people and the way to repay the favour is that “they should seek to contribute to the society as soon as possible”, even if the only job they can get is basic labour work.

“Where this (entering employment) will enable immigrants to maintain their personal honour and dignity it will also be a means of relieving the burden on the State and removing the frustrations of the local people. Certainly, every Muslim should keep in mind that the Holy Prophet of Islam (peace and blessings be upon him) said that the giving hand is far greater than the one that takes.”

His Holiness also stated that in some cases, immigrants received better benefits than tax-paying citizens, which led to “a natural frustration amongst the public”.

“Frustrations do not dissipate on their own because where there is frustration there is always a reaction. Therefore, every government should implement sensible and fair policies that keep in mind the rights and requirements of citizens and immigrants alike.”

His Holiness praised the decision of the German government to consider a new policy whereby asylum seekers would be required to do a year’s community serviceupon settling in Germany. His Holiness said such a scheme would “instil a belief that it is the duty of each person to serve their society and to help the members of the community.”

In a call for compassion and sympathy for those suffering genuine persecution or engulfed by warfare through no fault of their own, Hazrat Mirza Masroor Ahmad said:

“Society should not reject genuine refugees who are suffering through no fault of their own. Society should not cast aside innocent people who only want the opportunity to live in peace and who desire to be good citizens and follow the laws of the land in which they live. Instead, we should be there to give a helping hand to those whose lives have been broken, who have been tormented and who are utterly helpless, vulnerable and defenceless. Let us prove our humanity. Let us show our compassion. Let us be there to shoulder the burdens of those who are in desperate need.”

“Wherever, there is large scale migration it inevitably leads to security issues. Indeed, it has been proven that hidden amongst the genuine refugees are immigrants who have the potential to cause great harm…This is something I have warned about in the past that each case should be carefully analysed to ensure that extremists or criminals posing as refugees are not allowed to enter. Anyway, these issues mean that a fear of mass immigration from Muslim countries is to some extent justified.”

In terms of security, His Holiness His Holiness said that safety of the citizens of a country is a ‘paramount objective’ of a government and advised that where there was any suspicion about an immigrant, authorities should monitor them until they were satisfied that they no longer posed a threat.

Criticising those who blamed Islam for undermining peace in society and fuelling tension, His Holiness said that “a fair-minded, intelligent and wise person” must look at both sides of the story and not base their impression of Muslims and Islam on hearsay.

“Analyse whether the wicked acts by some so-called Muslims are motivated by the teachings of Islam… If it is proven that Muslims who do wrong are motivated by their religion it can be said that the concerns of the far-right are justified. Yet, what if their actions have nothing to do with Islam? What if anti-Islamic groups are spreading hateful myths that are based only on fantasy rather than fact?”

Thereafter, His Holiness dispelled some of the most common allegations made against Islam. His Holiness referred directly to the Holy Quran and the teachings of the Prophet of Islam (peace be upon him).

“In chapter 10, verse 100 of the Holy Quran, whilst addressing the Holy Prophet of Islam (peace and blessings be upon him), Allah the Almighty states that if He desired He could have enforced His will and compelled everyone to accept Islam. However, instead, Allah the Almighty preferred free will to prevail.” 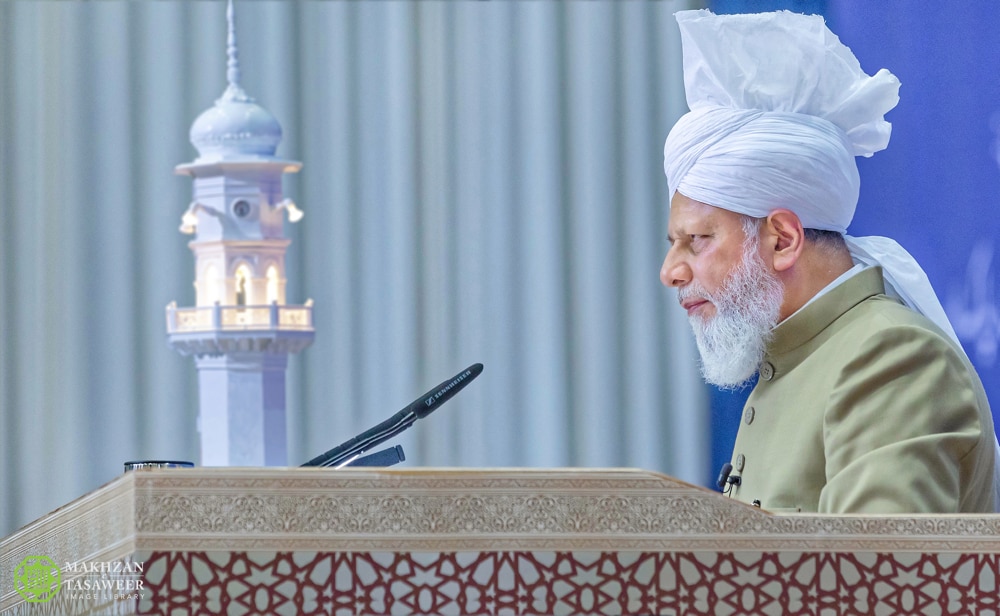 His Holiness referenced chapter 18 verse 30as another verse which emphasises the freedom of religion, and states:

Concluding his address, the Head of the Ahmadiyya Muslim Community said that all avenues in search of peace had been travelled except one. True peace required a belief that all humanity was united as part of the Creation of God Almighty.

“Day by day mankind is moving further away from religion and spirituality and the results are terrifying. It is my firm conviction that belief in God Almighty is the only means of salvation and the only way to bring about true peace both at a national and international level. And so, it is my deepest desire and ardent prayer that the world comes to recognise its Creator and comes to follow His true teachings.”

Earlier in the day, His Holiness, Hazrat Mirza Masroor Ahmad directly addressed the members of the Lajna Imaillah(Ladies Auxiliary Organisation) and responded to critics of Islam who claimed that Islam failed to recognise the important role of women in history.

On the contrary, His Holiness said that the role of women and the sacrifices they had made for the sake of faith would be recorded in history forevermore.

His Holiness also mentioned numerous incidents of great sacrifices made by the early Muslim women in the time of the Prophet of Islam (peace be upon him) and also, in this era, the role and sacrifices made by women from the Ahmadiyya Muslim Community for the sake of Islam.  He said they were examples of giving precedence to one’s faith over all worldly matters.

After the formal conclusion of the day’s events, His Holiness met with various delegations from abroad, including a large delegation of Arab Ahmadi Muslims and guests.