Oppressed in Islam’s heartlands, Ahmadis hope to fare better in the West 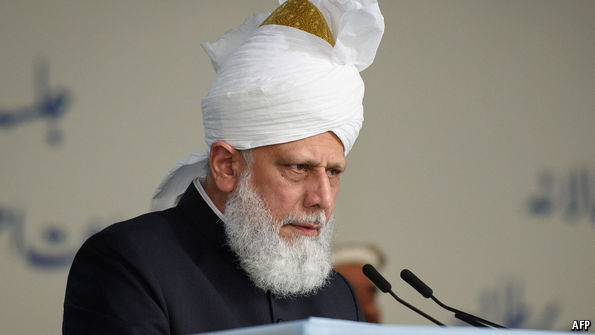 IN WHAT organisers called one of the biggest Muslim gatherings in the Western world, tens of thousands of faithful gathered this weekend in a green and pleasant part of southern England and affirmed their loyalty to their caliph. Does that mean an Islamic revolution is in progress? No, nothing of the kind. For Ahmadiyya or Ahmadi Muslims, the caliphate or supreme leadership of their worldwide community is a purely spiritual function; they see it as a point of principle that people should be loyal and useful citizens of whichever country they live in. That’s one reason why the three-day proceedings included the ceremonial hoisting of the British flag. The current caliph (pictured) made clear his view that Britain, where he resides, would benefit from more frequent public declarations of loyalty to Queen and country; for example, there could be an American-style pledge of allegiance to the flag in British schools.

For all its exuberance, the 50th annual gathering of Ahmadis from around the world (known as a Jalsa Salana) takes place under a shadow: the apparent spread of anti-Ahmadi hatred from the Muslim world to the Western diaspora. This is a religious group that has long faced persecution from the authorities, and from hostile compatriots, in Muslim-majority countries such as Pakistan and Indonesia. What divides mainstream Muslims from Ahmadis is the latter’s conviction that their founder, a religious teacher called Mirza Ghulam Ahmad who died in 1908, was a prophet; the mainstream Islamic belief is that there has been no prophet since Muhammad died in the seventh century, and that anybody who says otherwise cannot be called a Muslim.

In the newly published annual report on religious freedom by the American State Department (which includes a grim estimate that only a quarter of the world’s population enjoys liberty of conscience), it is recalled that in Pakistan, Ahmadis have virtually no legal right to exist.