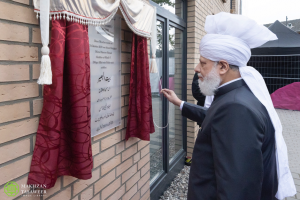 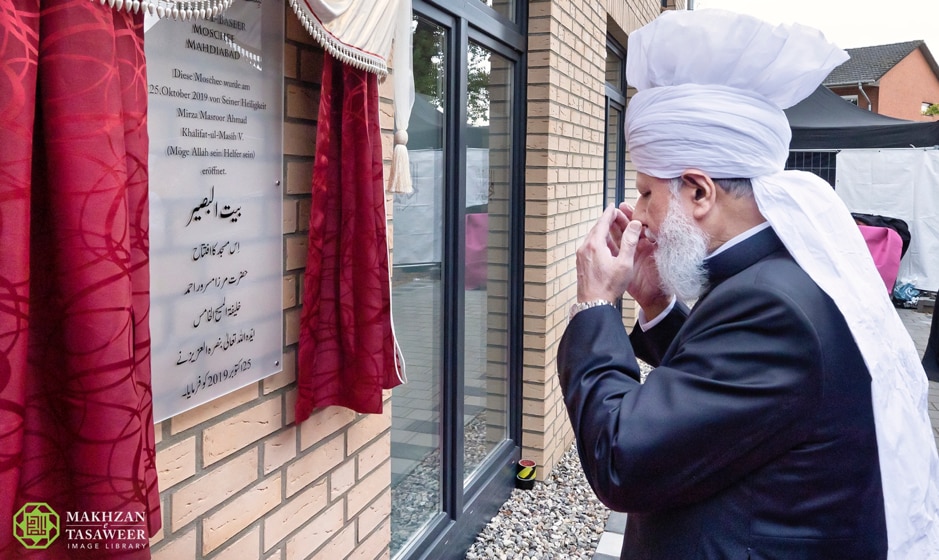 His Holiness officially inaugurated the Mosque by unveiling a commemorative plaque and offering a silent prayer in thanks to God Almighty.

Thereafter, His Holiness delivered his weekly Friday Sermon from the Mahdi Abad complex in which he outlined the significance of regular worship and prayer.

Commencing his sermon, His Holiness recited chapter 22 verse 42 of the Holy Quran, which states:

“Those who, if We establish them in the earth, will observe Prayer and pay the Zakat and enjoin good and forbid evil. And with Allah rests the final issue of all affairs.”

“In this verse, Allah the Almighty has drawn our attention to the fact that true believers are those who, when they attain power and are brought out from a state of persecution and into peace and when they are granted freedom to worship as they please, do not become consumed in fulfilling their own desires and interests. Rather, they establish the prayer and worship in Mosques. They serve mankind and with the fear of Allah the Almighty in their hearts, they spend out of their wealth to help the poor and the needy.”

His Holiness reminded the attendees that in certain countries Ahmadi Muslims are not free to worship and so those who are able to worship without restriction must make full use of the opportunity and fulfil their religious obligations. 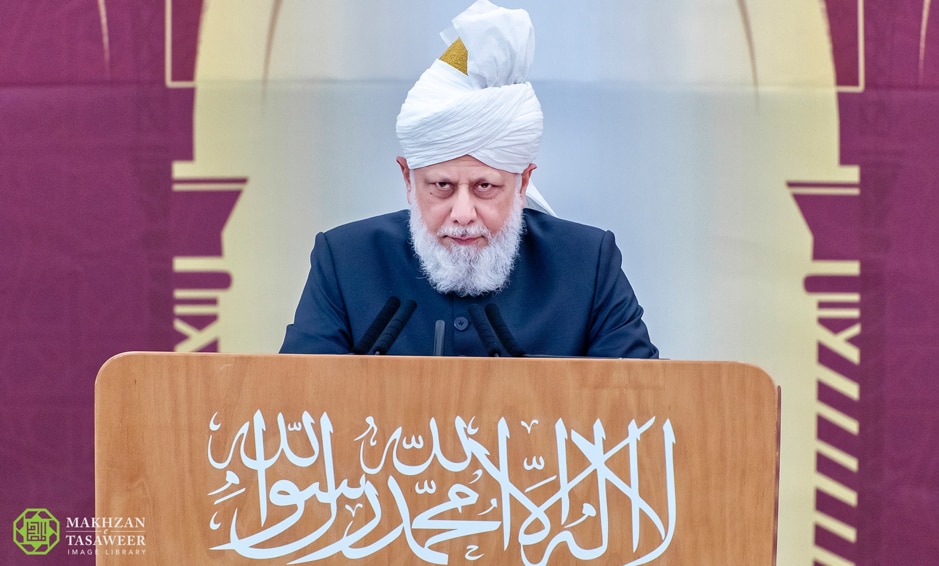 “Ahmadi Muslims do not have religious freedom in Pakistan. The (anti-Ahmadi) law bars us from building Mosques and fulfilling our obligations to Allah the Almighty and worshipping him. On the contrary, in Germany we are able to build Mosques and to fulfil our obligations to Allah the Almighty. Furthermore, the financial circumstances of most Ahmadi Muslims have improved after moving to the West. Every Ahmadi Muslim living in this part of the world must bear all of this in mind and strive to fulfil their obligations towards God Almighty and towards humanity. Furthermore, our Mosques should constantly serve as a reminder for fulfilling the pledge we have made to the Promised Messiah (peace be upon him).” 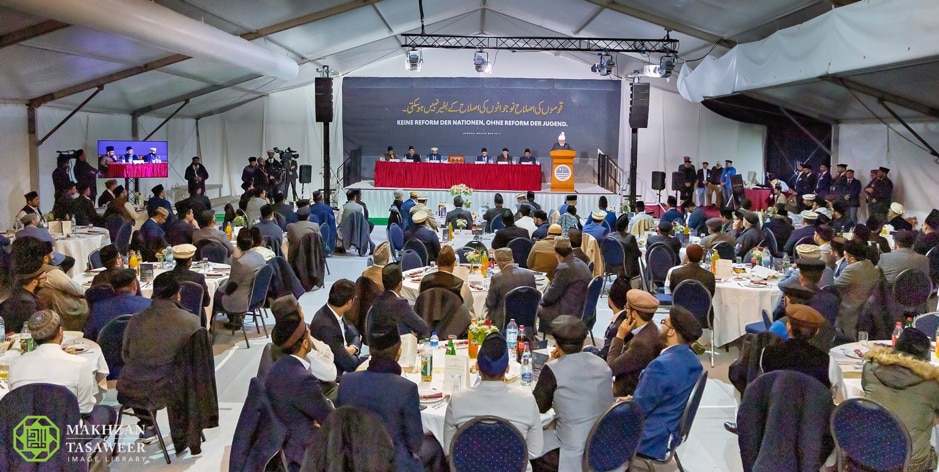 “It is the promise of Allah the Almighty, that whoever tries to gain the nearness of God with sincerity and determination and makes an effort to understand the majesty of God and gain His nearness, will find that God Almighty will come towards that individual.”

“The Holy Prophet Muhammad (peace and blessings be upon him) said that ‘when a person treads one step towards God, then God comes towards him two steps. If a person walks towards God, God runs towards him.’ Thus if a person fails to attain the nearness of God the fault lies with the individual.”

“May Allah the Almighty enable all Ahmadi Muslims to instil positive changes within themselves and to offer their prayers in the best possible way. May we purify our wealth by giving in charity and may we better our moral standards. May we spread peace and goodness within society.”

Later in the day, His Holiness addressed a gathering of Majlis Khuddamul Ahmadiyya Germany (Ahmadiyya Muslim Youth Association Germany) in which he outlined the importance of humility and following the instructions of the Khalifa of the time.

“If certain official positions are given to an individual, they should not consider themselves to be superior to others. Every office bearer within the Ahmadiyya Muslim Community should understand the saying of the Holy Prophet Muhammad (peace and blessings be upon him) that ‘the leader of a nation is the servant of the nation.’ A spiritual revolution can be brought about if this spirit is established within every office bearer. Reciting poems and making speeches is of no benefit if one’s ideology and actions are not in congruity with their words.”

“It should be kept in mind that one of the major responsibilities of Majlis Khuddamul Ahmadiyya is the protection of Khilafat-e-Ahmadiyya. This does not mean carrying out security duties. Rather, the responsibility requires the Khuddam to listen to and follow the words of the Khalifa of the time and to convey his message to others. The Jihad of this age is to act upon the Khalifa’s instructions which are guiding mankind towards the peaceful teachings of Islam.”