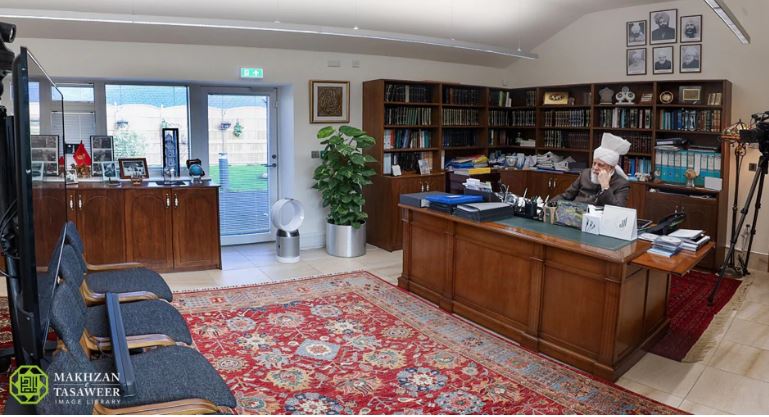 His Holiness presided the meeting from his office in Islamabad, Tilford, whilst the new converts joined from the Baitus Subuh complex in Frankfurt, which serves as the National Headquarters of the Ahmadiyya Muslim Community in Germany. 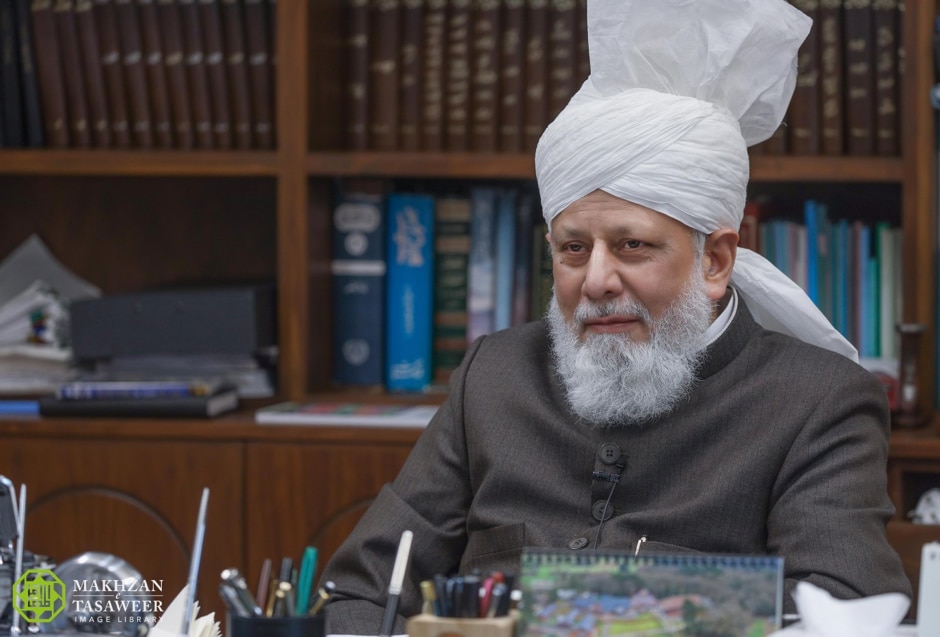 The event started with the recitation and translation of verses of the Holy Quran, followed by an Urdu poem of the Promised Messiah (peace be upon him) and its translation.

For the rest of the meeting, each of the converts was able to introduce herself and speak to His Holiness. Some asked questions, whilst others narrated their personal stories of why they accepted Islam and entered the Ahmadiyya Muslim Community.

His Holiness asked some of the converts if they were ready to bear hardships and religious opposition from their families and the wider society. All indicated that they were ready to make whatever sacrifices were needed for the sake of their faith and sought the prayers of His Holiness for their continued spiritual progression.

One of the converts narrated that she was from a Sikh background and her family was opposed to her conversion and did not want her to wear the headscarf or to practice Islam. She sought guidance on how she should respond to them.

“Tell your family that, ‘As long as my religion is concerned, I will practice my religion since I have accepted Islam as a true religion.’ But never try to argue or quarrel with them or fight with them in any way. You should treat them with due respect, especially to your parents and be polite to your siblings as well. But never leave the teachings of Islam. So, keep on practicing Islam’s teachings and pray to Allah the Almighty that may He change their minds and hearts.”

In reply to a comment where an Ahmadi Muslim lady, who had recently joined the Ahmadiyya Muslim Community, expressed her fear that perhaps she was lacking in some way in comparison to those who were born Ahmadi Muslims, Hazrat Mirza Masroor Ahmad reassuringly said:

“Every Ahmadi Muslim has some shortcomings. Do not feel you are lacking something. Even you might be better than some of the born Ahmadi Muslims.” 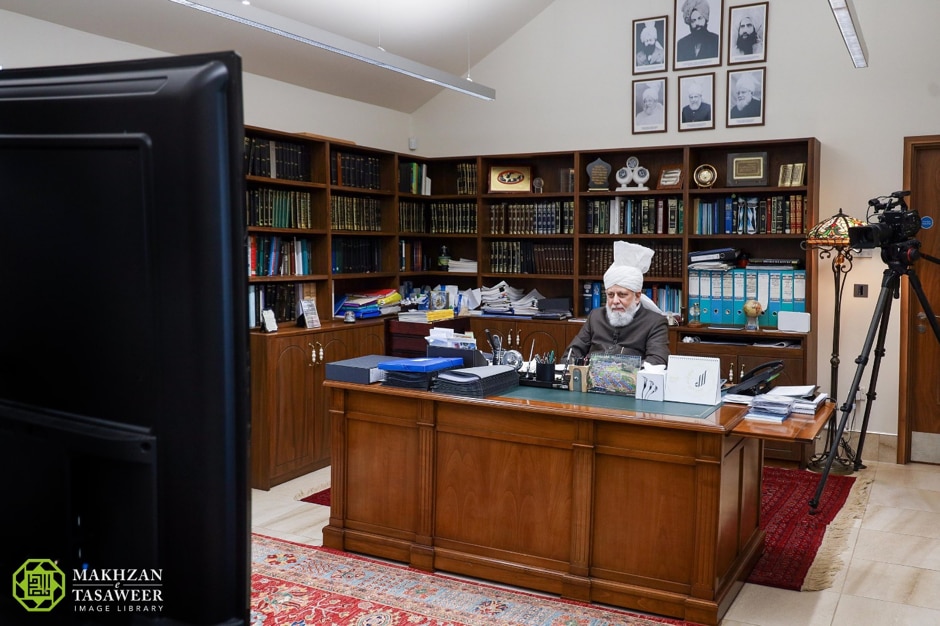 In response to a question about how to improve one’s attention whilst observing the five daily prayers, Hazrat Mirza Masroor Ahmad advised that when reciting chapter Al-Fatiha, which is the opening chapter of the Holy Quran during their prayers, they should repeatedly recite the portions “Thee alone do we worship and Thee alone do we implore for help,” and “Guide us in the right path.”

Another person asked about dreams and how to know if a dream is merely a representation of one’s subconscious or a true dream. In response, His Holiness said that though many dreams were a product of one’s subconscious and daily experiences, certain dreams had a much stronger impact upon the recipient. His Holiness said that if the converts saw such dreams which they felt had a deeper meaning they ought to write the dream to him or to other people who they trusted.

A convert said that because of Covid-19 restrictions new converts were unable to benefit from the environment of mosques, which were currently closed, and asked how they could create an Islamic atmosphere within their homes, whilst living amongst family members who were non-Muslims.

In response, Hazrat Mirza Masroor Ahmad said that modern technology had provided the means to remain connected with Khilafat and to increase one’s spiritual and religious knowledge. For example, the Ahmadiyya Muslim Community’s TV channel, MTA International, was widely accessible and so His Holiness said they should attach themselves to its programmes and visit websites of the Ahmadiyya Muslim Community to increase their knowledge. His Holiness also advised to keep in regular contact with other Ahmadi Muslims and to share knowledge and converse with them regularly.

One woman mentioned she was married before converting and her husband remained a non-Muslim. When His Holiness asked if her relationship was well with her husband, she informed that he does not like that she has converted but she was trying to act positively so he sees the good in her choice. His Holiness said she should continue as she was and pray for her husband that he too becomes an Ahmadi Muslim. He said she should care and love her husband even more than before so that he would come to recognise the positive impact of her acceptance of Islam.

His Holiness was also asked by the mother of a young child about how she could ensure the moral upbringing of her daughter so that she grew up to be a faithful Ahmadi Muslim.

“If you yourself become a good Ahmadi Muslim, your daughter will also become a good Ahmadi Muslim… Pray for her that Allah may make her good. When she becomes 7 years of age, have her pray with you too and try to get her to read the Holy Quran. Tell her what Islam is, why the Holy Prophet (peace and blessings be upon him) was sent as the last (law-bearing) Prophet and how he spread Islam and after that, according to his prophecy, the Promised Messiah (peace be upon him) was sent as his true servant. He again clarified that the true teachings of Islam require that you fulfil the rights of Allah and the rights of His creation. You should teach your daughter small easy to understand aspects of the Islamic faith. Teach her prayers and the declaration of the faith and show her your own good example and treat her with kindness and tell her pious and good things. This way her moral upbringing can be done in the best way.”