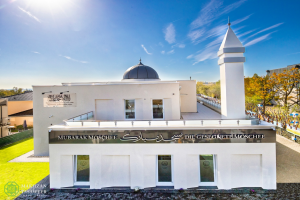 ‘Wherever we go, we will endeavour to help and serve humanity’ – Hazrat Mirza Masroor Ahmad. 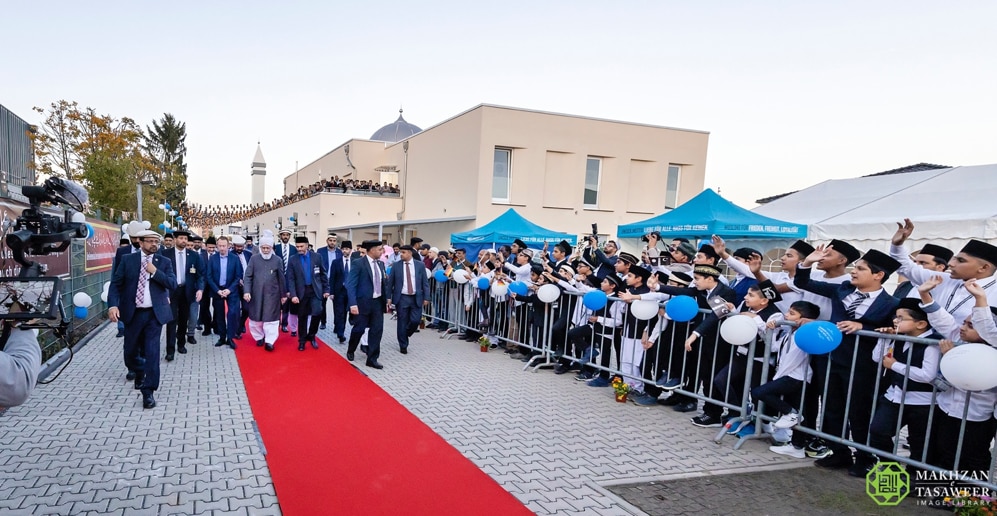 Upon arrival, His Holiness officially inaugurated the Mosque by unveiling a commemorative plaque and offering a silent prayer in thanks to God Almighty. Thereafter, His Holiness led the Zuhr and Asr prayers from the new Mosque.

Later, a special reception, attended by many dignitaries and guests, was held at the Kurhaus in Wiesbaden to mark the opening of the Mosque.

The highlight of the event was the keynote address delivered by Hazrat Mirza Masroor Ahmad during which he explained the true purposes of mosques and highlighted the importance of fulfilling the rights of mankind in light of the teachings of Islam.

During his address, His Holiness said that some non-Muslims harboured fears about Islam, Muslims and Mosques. 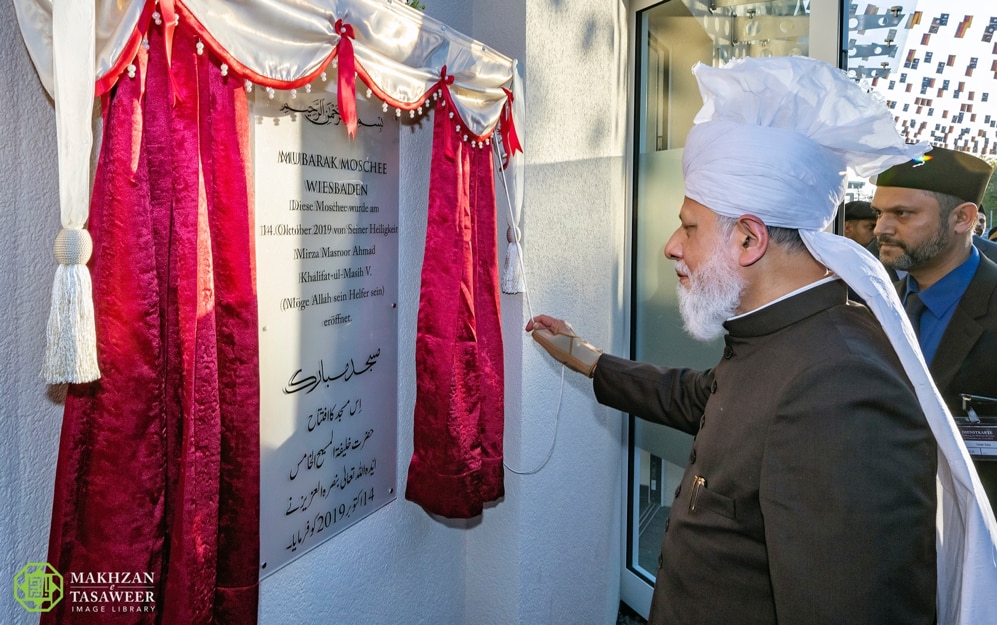 Explaining the true purpose of a mosque in this regard, Hazrat Mirza Masroor Ahmad said:

“Some people in the non-Muslim, Western world think that harmful plans and plots may be hatched in a mosque and fear that it may breed extremists. However, the true purpose of a mosque, as stated by the Holy Quran, is simply to congregate for the worship of the One God. Moreover alongside the worship of God Almighty, a Mosque serves as a place for Muslims to fulfil the rights of mankind.”

To fulfil the purposes of a Mosque, it was essential that the Muslims who worshipped there sought to live peacefully with other members of the community and to fulfil their rights.

“A Mosque demands that the people who come to worship in it are caring and compassionate and are those who do not come just for personal worship, rather take care of one another as well.”

His Holiness spoke about how the Ahmadiyya Muslim Community, driven by the teachings of Islam, endeavours to alleviate the suffering and difficulties of others around the globe.

“Perhaps people in developed countries, where water is readily available, do not realise the state of countries where there is a scarcity of water. There are many places in Africa where water is not available and young children are forced to travel two to three kilometres with buckets on their heads to bring water back home and they remain occupied in this task all day long.” 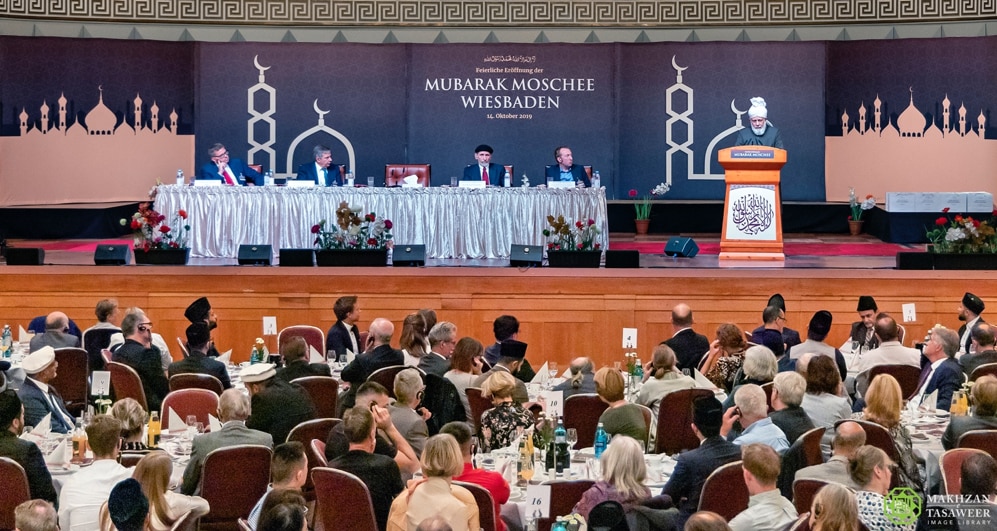 “In such impoverished countries, where the Ahmadiyya Muslim Community constructs mosques and where the community is established, we also build and run schools and also install water pumps. When clean water comes out from the ground the happiness of the local children and people is akin to the happiness a person in Europe might feel  if they won several million dollars. Such service is not only for Ahmadi Muslims alone, rather, 80% of the beneficiaries of our humanitarian work are non-Muslims, Christians, pagans or from different religions. Our service and efforts are provided without any discrimination.”

His Holiness mentioned the very first chapter of the Holy Quran which states Allah to be ‘Lord of all the Worlds’. 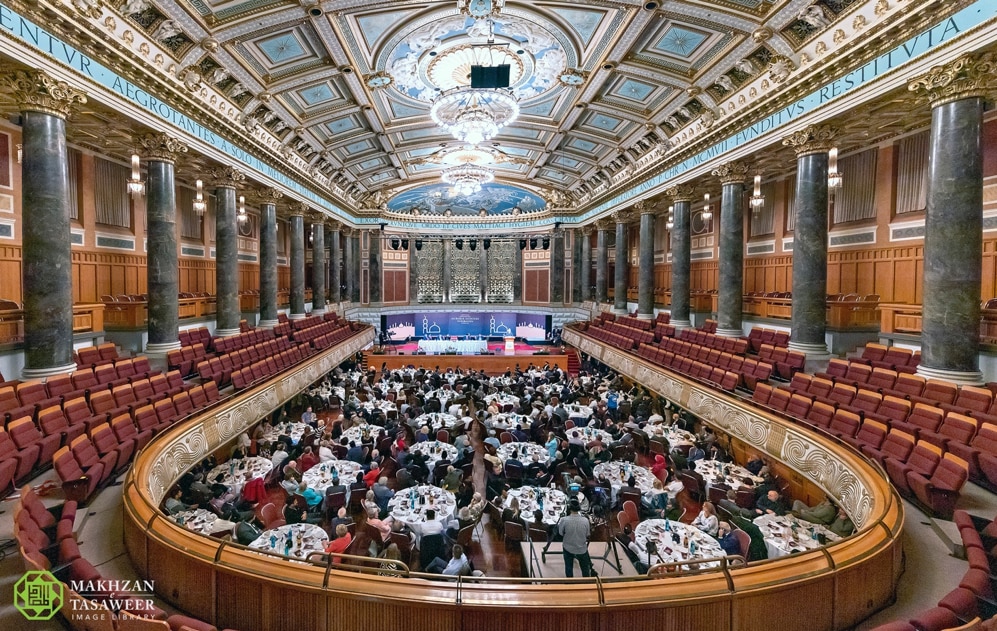 Refuting the common allegation that Islam is a religion of violence, His Holiness gave the example of how the Holy Prophet Muhammad (peace and blessings be upon him) and the Muslims endured severe persecution for 13 years without a single incident of retaliation.; 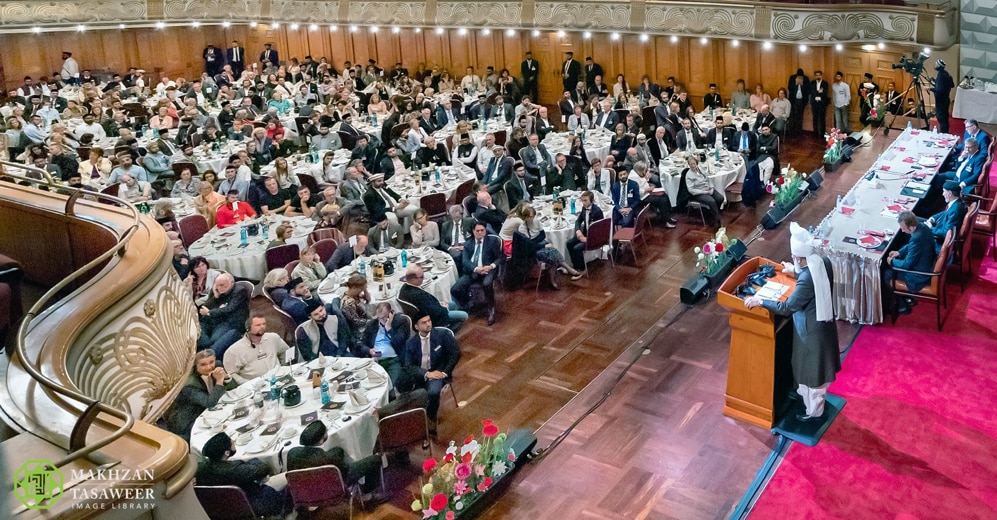 His Holiness explained that after all this time, it was only to defend the right of all religions that permission to fight back was finally given. The opponents of Islam sought to defeat and eliminate all forms of religion and so in order to defend the rights of Christians, Jews, Hindus and the people of all faiths, the early Muslims were commanded to wage a defensive war.

Speaking about the immigration of Muslims to the West, His Holiness said that true integration required mutual tolerance and respect.

Giving an example of this from the life of the Holy Prophet Muhammad (peace and blessings be upon him) Hazrat Mirza Masroor Ahmad said:

“I hope and pray that the Ahmadi Muslims who reside here spread the true teachings of Islam – of love and affection – throughout this area and city.”

“I had the opportunity to welcome the Caliph (Hazrat Mirza Masroor Ahmad) when he came to lay the foundation stone for the new Mosque (in 2014) and we also planted a tree there and it was a very special day for me to spend time with His Holiness which I will never forget. That day it was raining but when His Holiness came, all of a sudden the sun started to shine. It has been many years, five years, but I still remember that time… The Ahmadiyya Muslim Community has an exemplary status in the world and they have played an exceptional role in trying to propagate peace, harmony and love throughout the world. I hope that this mosque is very blessed for you and you continue to have good dialogue with your neighbours.”

“As a Christian I pray that may God Almighty bless and protect this mosque in every way and may everyone who enters this mosque be blessed and protected. I am thankful that Ahmadi Muslims are going to make this mosque their new home.”

“I have already seen the role that you people are going to play in this mosque and the positivity that will come forth from this. This is the house of all of us, this is the belief of all of us, it is not specific to any one particular religion. Your community has played a huge role. The power of belief is amazing, it is something that can bring people together. I would like to congratulate all of you from the depths of my heart on the inauguration of this mosque. It is very blessed for me and I am honoured to congratulate you on this occasion. I hope that this new mosque becomes a mosque where many citizens of Wiesbaden will speak with one another and learn about this community. Your example is unparalleled; the way you have done so many sacrifices is something which is worthy of mention. I am very thankful and happy for that.” 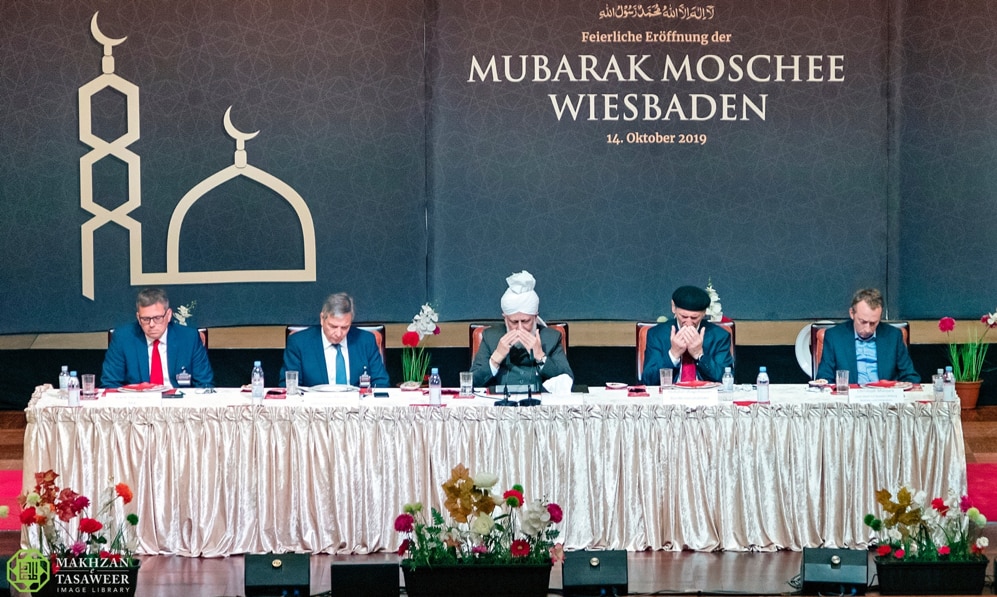 The formal session concluded with a silent prayer led by His Holiness, followed by dinner.

Later, a Press Conference was held where His Holiness answered questions about the new Mosque and the efforts of the Ahmadiyya Muslim Community to remove misconceptions regarding the teachings of Islam in the Western world.