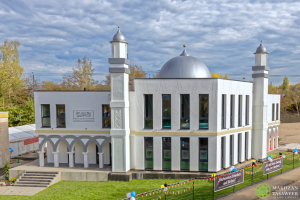 “No one can forcefully change another person’s religion” – Hazrat Mirza Masroor Ahmad. 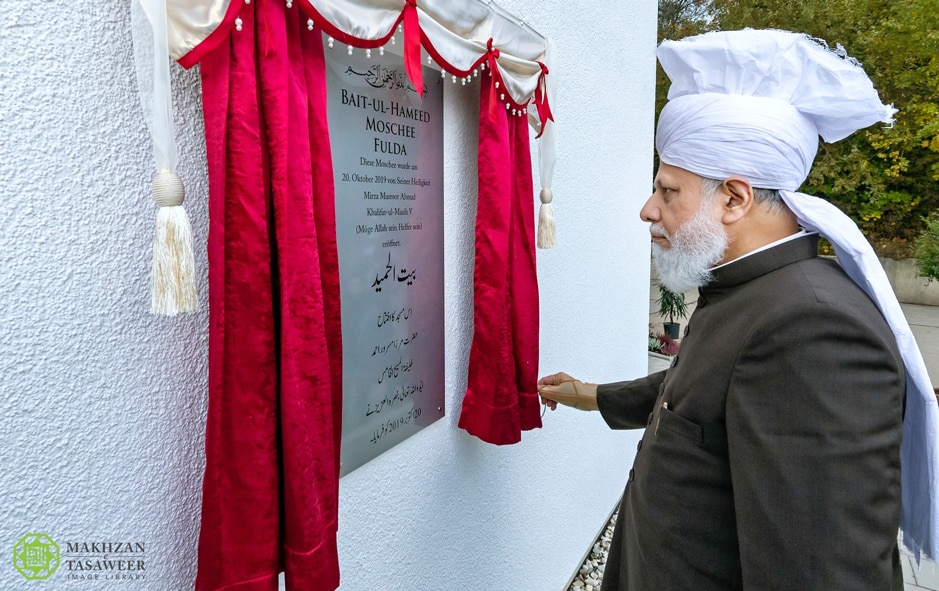 Upon arrival, His Holiness officially inaugurated the Mosque by unveiling a commemorative plaque before leading the Zuhr and Asr prayers at the new Mosque.

Shortly afterwards, a special reception, attended by 330 dignitaries and guests, was held at the Maritim Hotel in Fulda to mark the opening of the Mosque.

The highlight of the event was the keynote address delivered by Hazrat Mirza Masroor Ahmad during which he explained the true purposes of mosques and highlighted the vital importance of the peaceful co-existence of different communities and races. 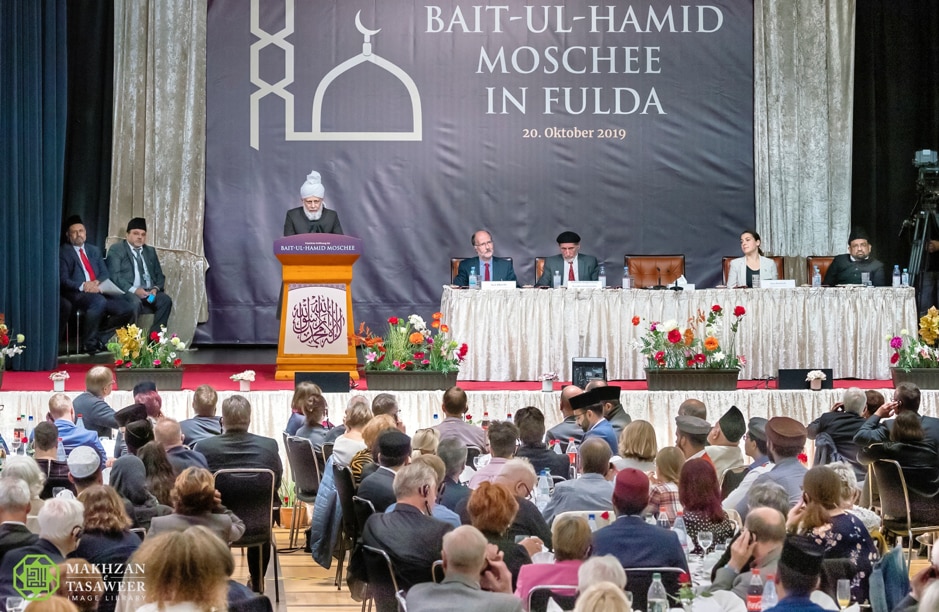 At the start of his address, His Holiness expressed his gratitude to the people of Fulda who assisted in the Mosque project.

“To make this Mosque a reality, the people here in Fulda played a key role. In this regard, I want to thank you – the people of this city who gave permission for this Mosque to be built. I particularly thank the Council and the Mayor – who helped us.”

His Holiness mentioned the long-standing and strong Christian traditions of Fulda and said the fact that permission for a Mosque was granted illustrated the open-minded and tolerant nature of the local people.

“Your open-mindedness clearly shows that you want to co-exist and live with other faith groups and communities. One of the guest speakers mentioned that there are more than 100 different ethnic communities living together in this city and for so many different communities to live together in this city, which was founded on the core principles of Christianity, illustrates the open hearts and welcoming nature of the local people here.”

His Holiness spoke about the fundamental importance of unity and mutual respect within society. He described modern day society as a ‘global-village’ given the way modern technology and the means of travel and communication meant that the entire world was now connected.

“In this globalised world, it is essential that rather than harbouring negative feelings and fearing of one another, we should have positive feelings towards others. Certainly, this is the duty of every person who associates themselves to any faith, be they Christian, Muslim, Jew, Hindu or any other.”

“Education serves a purpose when it affects the heart in a positive way, when it enlightens a person and motivates him or her towards doing good and taking care of other’s feelings.”

In light of this, His Holiness praised and thanked the guests in attendance and said their presence was testament to their open-minds and respect for others. He prayed that the respect shown by the guests was returned in even greater measure by the local Ahmadi Muslims.

Later, His Holiness spoke about the Founder of Islam, the Holy Prophet Muhammad (peace and blessings of God be upon him) and presented his personal example of inter-faith tolerance and respect.

“In Medina, during the time of the Holy Prophet of Islam (peace and blessings of God be upon him), there was a Christian delegation who came to meet him. During the exchange, the Christians, who had come from Najran, became restless because the time of their prayer had approached and they wondered where they could worship. At that time, the Holy Prophet Muhammad (peace and blessings of God be upon him) reassured the Christians and said that they could pray and worship in his Mosque. This is the way to create true peace and forming strong bonds and relationships.”

His Holiness then expressed how Islam is misunderstood and misconstrued in the media today.

“Today, Islam is wrongly portrayed in the media and it is often said that Islam or Muslims are disturbing the peace of society. However, the word ‘Islam’ itself literally means ‘peace’ and so if a Muslim does not fulfil the rights of others he fails to uphold by the teachings of Islam. The Holy Prophet of Islam (may the peace and blessings of God be upon him) has said that a true Muslim is he from whose hands and tongue others are safe.”

His Holiness praised the ‘Round Table’ initiative in Fulda where different religious and faith groups joined together to increase mutual understanding. He further explained how during the time of the Founder of the Ahmadiyya Muslim Community, Hazrat Mirza Ghulam Ahmad (peace be upon him) an interfaith programme, underpinned by the principle of mutual respect, was held.

“In the inter-faith conference held during the time of the Founder of the Ahmadiyya Muslim Community (peace be upon him), representatives from many faith groups took part. A condition of participation was that all the delegates would seek to educate others about their faith and, at the same time, they would not say anything negative about the faith of others or mock them in any way. Rather than criticise and condemn others, each representative was limited to speaking about the qualities of their own religion or faith.”

His Holiness also used his address to refute the allegation that Islam promotes an extremist ideology. 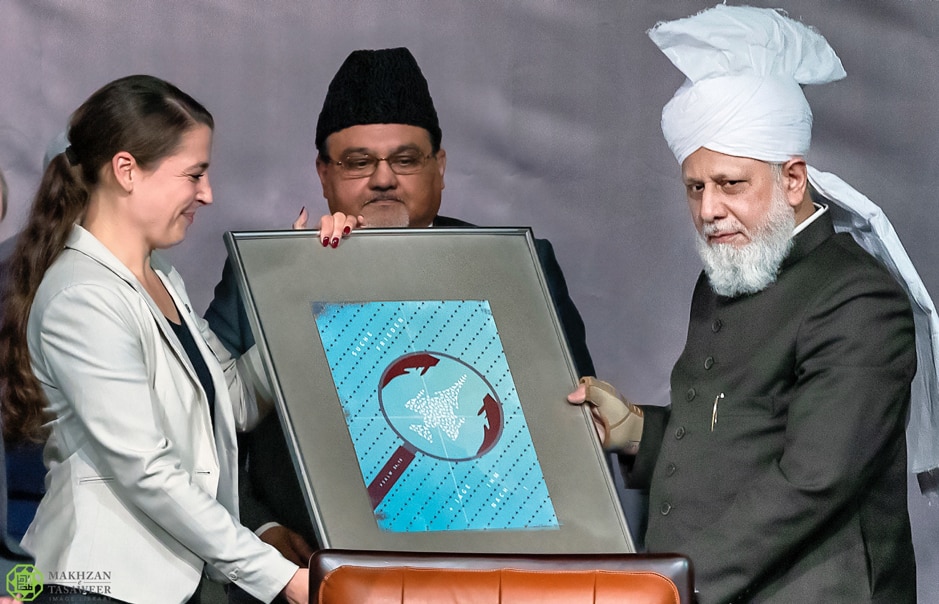 “God Almighty states in the Holy Quran that there is no compulsion in religion. No one can forcefully change another person’s religion. Every person is free to decide what they want for themselves and to choose their own path.”

“May God Almighty enable this Mosque to prove to be a means of manifesting the true peaceful teachings of Islam and may the local people come to see for themselves that Ahmadi Muslims are people who serve their society and who promote love and foster peace.”

“We believe in the One God and consider it our duty to open our doors and spread a message of peace to others. We congratulate you on the opening of your new Mosque here in Fulda.”

President of the Round Table of Religions, Kurt Albrecht said:

“We should always remember that we are all human beings and this is common amongst us all. We should respect one another as humans and the Ahmadiyya Muslim Community has made great efforts in this regard here in Fulda.”