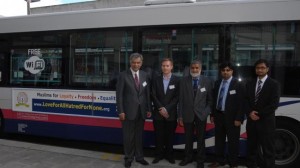 The Ahmadiyya Muslim association in Bristol has launched the positive drive to promote the values of loyalty, freedom, equality, respect and peace, which its says are common to Islam and Britain.

Muhammad Noman, regional president of the Ahmadiyya Muslim Community South West, said: “There remains a concern about Islam especially in light of events in other countries carried out by Jihadist groups. We certainly believe in Jihad – but the true concept of Jihad is one of self-reformation and not of harming others.

“A true Muslim can never raise his voice in hatred against his fellow citizens, nor for that matter against the ruling authority or government of the time. He should remain loyal and fully abide by the laws of the land of which he is a subject.”

A launch ceremony was held for distinguished guests from all walks of life at the Holiday Inn Hotel Bristol.

Mr Noman added: “The true peaceful Islam is poles apart from the exclusion and hatred that is preached by a minority.

“Such extremists do not represent Islam, yet, through the media, their words and deeds have a damaging impact on Muslims and non?Muslims every day.

By emphasising the values highlighted in our campaign we hope to facilitate a better understanding of Islam so that people are able to judge for themselves the actions of those who claim to speak and act in its good name. Islam stresses the promotion of peace in words and deeds.”

The bus campaign is part of a wider series of activities to mark 125 years of the Ahmadiyya Muslim Community.