Muslims from Dundee join MSPs at Holyrood for anti-extremism event 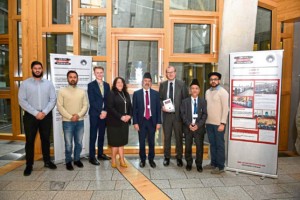 Ahmadiyya Muslims from across Dundee and Scotland were joined by several MSPs at Holyrood as they held an event to condemn extremism.MSPs including Shona Robison, Pauline McNeill and John Mason all voiced their support for the group’s new campaign, which is called United Against Extremism.

The group gathered under the banner of Love for All, Hatred for None and were joined by more than 90 audience members from many different walks of life.Keynote speaker Fareed Ahmad said: “The Ahmadiyya Muslim Community, as part of its pledge, includes a statement to promote the loyalty of its members to their country as we see loyalty to our country as a key part of our faith.

“This promotes identity and integration and inspires our youth to serve their country and humanity everywhere with pride.“Through such service we seek to sow seeds of compassion to cultivate mutual friendship, respect and peace.”