Muslims and other faiths unite in Huddersfield to condemn terrorism 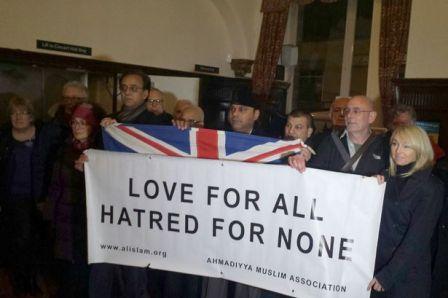 A united show by different faiths to condemn terrorist attacksPeople of all faiths came together in Huddersfield to condemn terrorism.They were at a mosque in Fartown for a specials service organised by the Ahmadiyya Muslim Community. The event attracted not only Muslims but Sikhs and Christians.

Fatihul-haq, president of the Ahmadiyya Muslim Community Huddersfield South, said: “We condemn the actions of extremists wherever they may be, whatever their cause. We are with the people of France in sharing their pain.“This was an outrageous attack on the peaceful innocent members of the public and they are in our thoughts and prayers.

“We consider this to be not just an attack on France but on the entire humanity and we express our condolences to the families of the bereaved and pray for the fast recovery of all those injured.“We ask the world to unite against this menace and to work to eliminate all forms of extremism.“We believe in love for all and hatred for none, and peaceful dialogue is the only way to cultivate understanding and harmony between people”.People of all faiths unite in Huddersfield to condemn terrorism