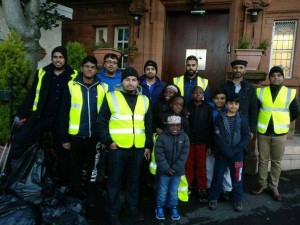 Hundreds of Muslims rang in 2018 by cleaning the streets in town centres across the UK.

Volunteers from the Ahmadiyya Muslim Youth Association (AMYA) launched a mass litter-picking initiative on New Year’s Day in London, Leicester, Cardiff and Manchester, along with a number of other smaller towns and cities.

The clean up, which was organised in association with local councils, saw 1,000 young Muslims collect rubbish following the New Year’s Eve celebrations.

“It’s nice to see youngsters cleaning the streets as there is such a negative perception that they make all the mess,” Abdul Lodhi, who heads up the national campaign, told the Manchester Evening News.

Mr Lodi, who spent the day in Manchester helping the team collect rubbish, added: “It is great seeing these young guys coming out to help when they could be doing anything they want.

“People really appreciated it when they saw what we were doing. It makes such a difference to the local area. Hopefully we will be back later this year to do it all over again.”

Clean-up efforts started after morning prayers at 5am. The youngest volunteer to help out in Bolton was just seven-years-old.

AMYA has over 80 local branches and a membership of more than 6,000, according to the association.

Headquartered in London, its members are aged between seven and 40. The group is heavily involved in charitable initiatives as part of their faith.

“Not only does this promote values of kindness and service to humanity amongst British Muslim youth, it serves to break barriers and brings our British society closer together at a time we seem to be moving further apart,” the group said on its website.