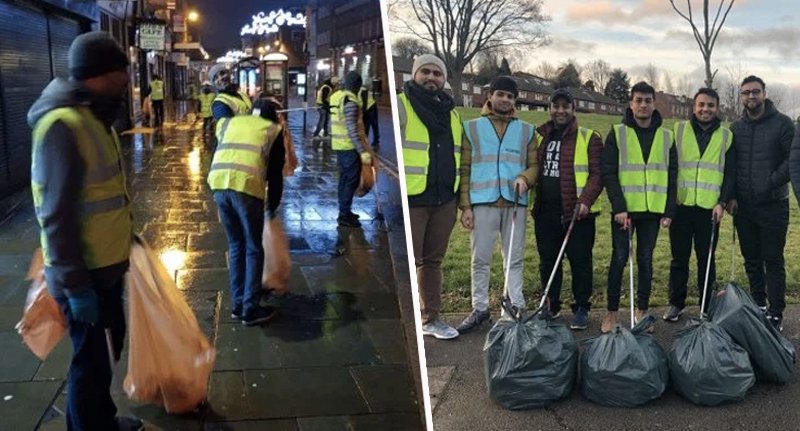 Groups of young people across the UK have been praised for taking to the streets of various towns and cities early this morning (January 1), to help clean up after New Year’s Eve celebrations.

More than 1,000 members of the Ahmadiyya Muslim Youth Association (AMYA), got up early, held a special prayer meeting, then put on hi-vis jackets, before collecting hundreds of bin bags full of rubbish off the streets.

The clean-up was organised by the AMYA, and is designed to encourage people to take pride in community service, charitable work, and keeping their towns and cities clean.

From Luton to London, Glasgow to Guilford, Cardiff to Croydon, across the entire country 1,000 members of AMYA participated in the New Year’s Day clean up.

AMYA has and continues to instil young people with a sense of civic responsibility, and a desire to promote harmony within our local communities.

Communities from Bolton, Leicester, Hartlepool, Croydon, Wimbledon and many, many others, took to the streets to help pick up litter and clean up their towns.

The New Year’s Day Clean-up campaign ensures Muslim youth can be active members of society and serve their communities and the environment.

AMYA is the UK’s largest and oldest Muslim youth group, and over the course of 2018 alone, they’ve held more than 300 community clean ups, and planted over 20,000 trees across the country.

We’ve been doing the New Year’s clean-up for many years now, and each year we see more and more members coming to help.

Each year thousands of its members, young and old alike, run, hike, cycle or walk to raise money for charities.

Not only does this promote values of kindness and service to humanity amongst British Muslim youth, it serves to break barriers and brings our British society closer together at a time we seem to be moving further apart.

It’s great to see so many young people taking pride in their communities, and bringing a positive start to the new year.