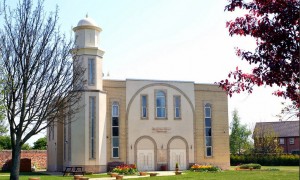 A Muslim leader has thanked the Hartlepool public for its support following the terrorist attacks on two mosques in New Zealand which saw 49 people killed Mass shootings were carried out at two mosques full of worshippers attending Friday prayers in Christchurch in an attack broadcast in horrifying live video by an immigrant-hating white nationalist wielding at least two rifles. One man was arrested and charged with murder, while two other armed suspects were taken into custody while police tried to determine what role they played. The gunman behind at least one of the mosque shootings left a 74-page manifesto that he posted on social media under the name Brenton Tarrant, identifying himself as a 28-year-old Australian and white nationalist who was out to avenge attacks in Europe by Muslims.

Now Tahir Selby, imam of Nasir Mosque in Brougham Terrace in the town, has thanked residents for showing support following the horror incident. He told the Mail: “I would like to thank all the lovely people of Hartlepool who had shown us support after hearing the terrible news of the murder of 49 Muslims who were worshipping God at their Mosques in Christchurch, New Zealand. “We are overwhelmed by the love and support of the citizens of Hartlepool who have laid flowers in our garden, written or telephoned us expressing their prayers and condolences. “The Newcastle Council of Faiths have also written to us and offered their support at this time.

“Yesterday I attended the ‘LOVE Hartlepool’ meeting with Farhan Ali – Outreach Secretary and for me, there is no better way of expressing our love for Hartlepool than this great show of everyone standing in solidarity, no matter what our beliefs, colour or nationality. “We are all children of the One God and will not tolerate any form of terrorism.” Mr Selby added that the mosque will again be holding an open day later this month. He said: “We will once again be opening our doors on Saturday, March 30, for an Open Day at the Nasir Mosque Hartlepool and the main purpose is to help people know about each other’s beliefs and see that we are promoters of peace and love and have nothing to do with terror and hate. “It saddens me at the direction this world is moving in, but when I see the lovely people of Hartlepool showing such love and support I am filled with hope. Cleveland Police increase patrols after dozens killed and injured in terror attack on two mosques in New Zealand “Thank you, everyone and this is why I love Hartlepool. “Our heartfelt prayers are with the victims of these attacks and all those who have been affected, Amen.”
https://www.hartlepoolmail.co.uk/news/muslim-leader-thanks-hartlepool-public-for-support-following-terrorist-attacks-on-mosques-in-new-zealand-1-9654086