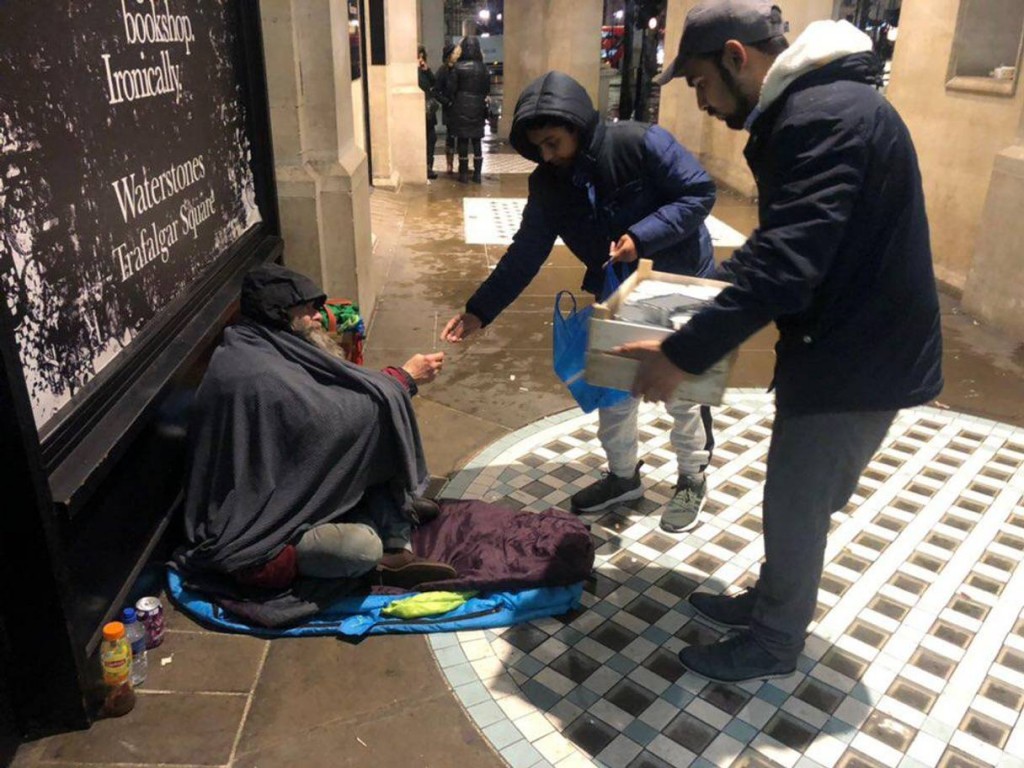 A Muslim youth charity has beaten its own record by delivering more than 5,000 meals to homeless people at major cities across the UK, and aims to reach the 7,000 mark by New Year’s Day.

Charing Cross, one of Central London’s homeless hotspots was rife with rough sleepers over the weekend, where volunteers from the Ahmadiyya Muslim Youth Association (AMYA) were busy distributing food and supplies, including water, gloves and winter hats.

Sabah Ahmedi, who at 25 is one of Britain’s youngest Imams, said its principal goals are to follow Islamic teachings by providing help to people who need it, and to counter radicalisation amongst youth by engaging them in positive action for social change.

He said teaching young people to give back to the community means “there is no room for extremism or radicalisation.”

As well as delivering food, Mr Ahmedi said the organisation’s volunteers will be cleaning up the mess left behind by revellers on New Year’s Day. He added: “We feel that it is part of our responsibility to do this in the country in which we live.”

The charity, launched in 1989, is a wing of the Ahmadiyya Muslim Community, which formed in the UK in 1913. It claims to be the largest and oldest Muslim youth charity in the country with some 9,100 members spread across 148 chapters. As well as the seasonal food drive, volunteers also deliver an average of 150 meals a week to homeless people all year round.

One of those volunteers, Qamar Ahmed, said: “Even though we don’t celebrate Christmas, it doesn’t stop us from reaching out and helping others who do, especially at this time of year when they are lonely and on the streets.”

As well as delivering food to rough sleepers, he said the charity inspires young volunteers to reach out to people experiencing mental health problems and loneliness in care homes and orphanages.

Recent analysis from homeless charity Shelter suggested there are 320,000 homeless people on record in the UK, a figure which increased by 13,000 over the last year. This means one in every 200 people in Britain are either homeless or living in temporary accommodation.

With almost 170,000 people living on its streets, London has the highest levels of homelessness, equating to one in every 52 people, the charity said, adding that Brighton, Birmingham and Manchester are suffering from the housing crisis. It estimated there are 131,000 homeless children in Britain today.

Nadia, an elderly woman who lives on the streets was one of 150 people or so to receive a meal from volunteers in Charing Cross. She said: “We want change. The system is wrong and it’s putting people on the street. We want nobody to be on the streets anymore. We want everybody to have a self-contained flat.”

She added: “The system is about divide and rule. The rich become richer, the poor more poor. We live in the 21st century and everybody should be living properly – not be forced into accepting handouts. I am on the streets because the system is wrong. We should change the corrupt, rotten system.”

The Office of National Statistics recently revealed there were an estimated 597 homeless people that died in England and Wales in 2017 – a figure which the study claims has increased over the last five years.

Nadia said she did not want to elaborate on why she is homeless, but other homeless people in Charing Cross gave their reasons.

Artur Martinez, 28, who came to the UK from France to work in the food and beverage industry said he has been sleeping rough for six years because of the high cost of renting in London. He said property developers in the city are driving up prices and landlords are capitalising on the market while social housing continues to dwindle.

Another, a trained civil engineer and former teacher from Algeria who did not want to be named, said: “Immigration fucking up brought me to the streets. The Home Office lost my file and put me in limbo since almost 20 years now. I had a work permit and they revoked it. I was even married to a British person. This is about social justice – and if there were no food handouts like this, I would have to fend for myself in another way.”

Linwood Sewell said he has been living on the streets on and off for three years. He said the prison system did not help to rehabilitate him. “After prison I was ordered to stay away from home. I’m just a remandee but the food handouts on the street are something to look forward to.”

Algis, 29, from Lithuania, said he has worked and paid taxes in the UK for six years and has never claimed benefits but found himself on the streets after losing his job because he could not afford expensive London rents. He said: “I want a job but it’s hard when you don’t have a place to live. You just can’t stay in the street and work.”

James McHugh said he ended up on the streets after a divorce. He said: “I used to think a lot of the people on the streets were lazy but I found out it’s the opposite. Most of them work, and unfortunately they don’t have enough money to pay rent, that’s why we’re on the streets.”

About the work of the charity he said: “It’s good, it makes a complete difference. The reality is, they’re keeping us alive – the hot food and the camaraderie actually keeps us alive.”

More than a thousand meals were also delivered across other major cities including Derby, Nottingham, Milton Keynes, Huddersfield, Sheffield, Manchester and Cardiff. The organisation’s volunteers are now bracing themselves to make one final push to reach their 7,000 meal distribution target by New Year’s Day.