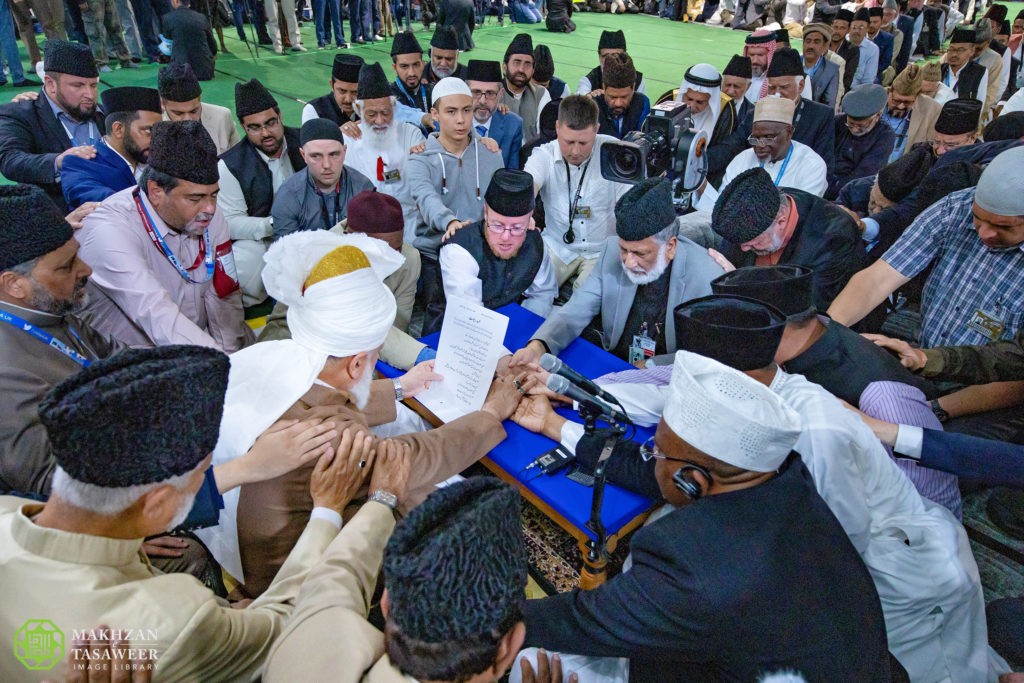 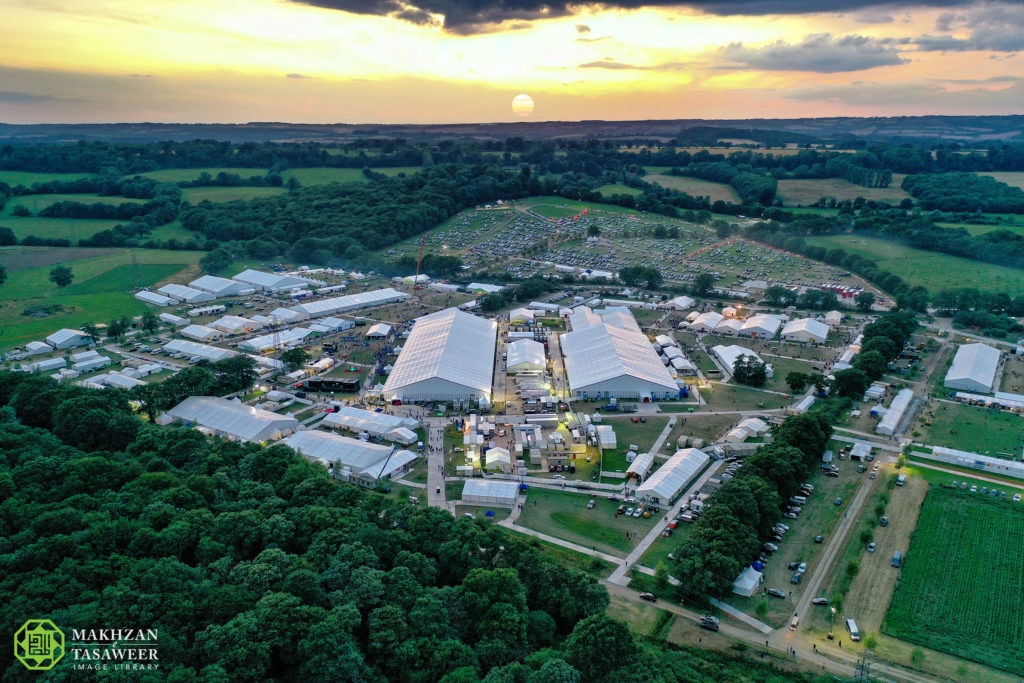 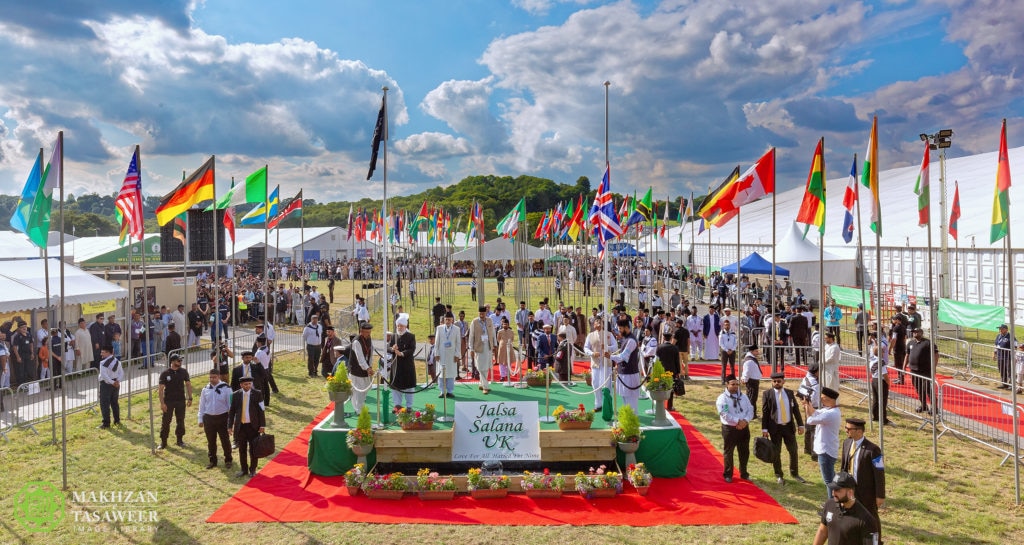 Apart from the thousands of Ahmadi Muslims who participated, many non-Ahmadi and non-Muslim guests also attended.  The entire event was broadcast live on MTA International and streamed online.

A highlight of the three-day Jalsa Salana was the pledge of allegiance, known as Bai’at, that took place on Sunday afternoon, where the participants pledged allegiance to Hazrat Mirza Masroor Ahmad as the Fifth Khalifa (Caliph) of the Promised Messiah (peace be upon him).

The participants formed a human chain leading to the Khalifa as they repeated the words of the pledge in unison. 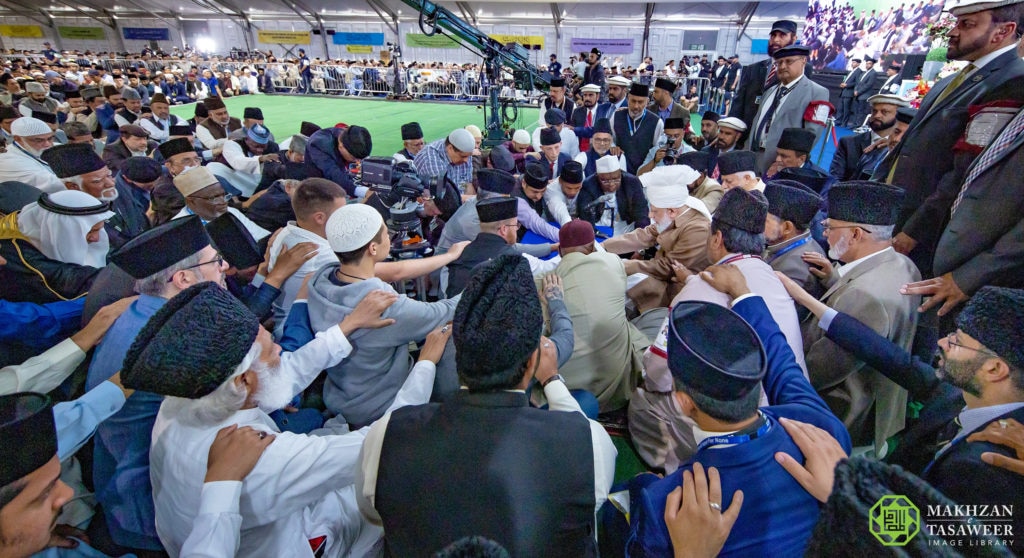 Prior to the ceremony, His Holiness announced that more than 668,500 people had joined the Ahmadiyya Muslim Community during the past year from all around the world.

During the address, His Holiness spoke of how Islam in particular, and religion more generally, was being vehemently criticised in the modern world. In light of this, His Holiness powerfully defended Islam’s teachings and highlighted Islam’s superiority to other social systems and spoke of the Holy Quran’s teachings on defending the human rights of all people.

His Holiness said that it was commonly alleged that religion was out-dated and incompatible with the modern world and hence religious teachings should be changed in order to suit the needs of the new era.

His Holiness said that whilst some other religions are debating whether their religious teachings need to be reformed to suit the modern era, Islamic teachings were timeless and universal and the Holy Quran is, and always will be, the most comprehensive book sufficient for all times and all places. 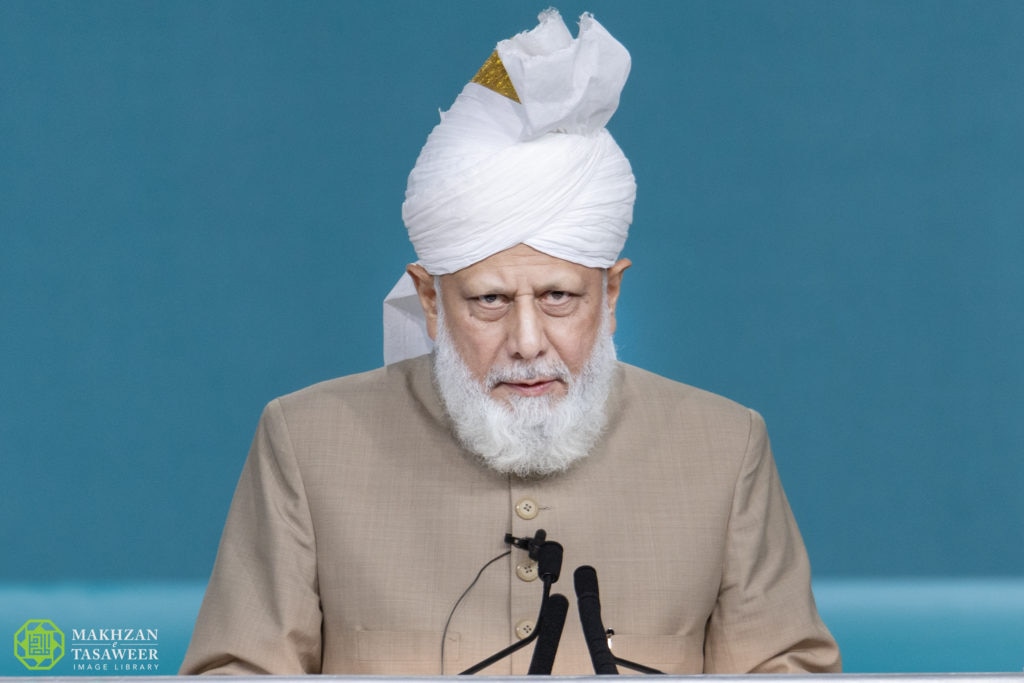 “We firmly believe that the Holy Quran is the book of Allah the Almighty, and He has promised to safeguard it. Other religions no longer have their original teachings, however the Holy Quran’s teachings have not changed for over 1400 years and will remain so until the Last Day. The teaching of the Holy Quran is everlasting and is for people of all eras.”

“In this era, by sending the Promised Messiah (peace be upon him), Allah the Almighty has further safeguarded the teachings of the Holy Quran. The Promised Messiah (peace be upon him) expounded upon the teachings of the Holy Quran and revealed its hidden treasures. He demonstrated that the Holy Quran caters for the need of all aspects of human interactions; from social relations between individuals and societies to international relations between world nations. It expounds upon spirituality whilst at the same time it reveals great academic and scientific truths. It comprehensively lays out the rights of God and the rights of God’s creation. Therefore, there is no need to be affected by the objections of critics and we should never be under any complex about the Holy Quran.”

“The Holy Quran caters for even the most seemingly insignificant needs of human beings. The Holy Quran and the Holy Prophet Muhammad (peace and blessings be upon him) established our rights for us and these are the rights that can guarantee peace at all levels of society.”

His Holiness went on to cite the rights and obligations as laid out by the Holy Quran that its followers must fulfil, including the rights owed to parents, elders, children, neighbours, spouses and all creation of God.

The aforementioned verse of the Holy Quran states:

His Holiness further mentioned that people should think well of others and not think ill of them. Thus, by doing so, they would develop love, unity and strength amongst each other. 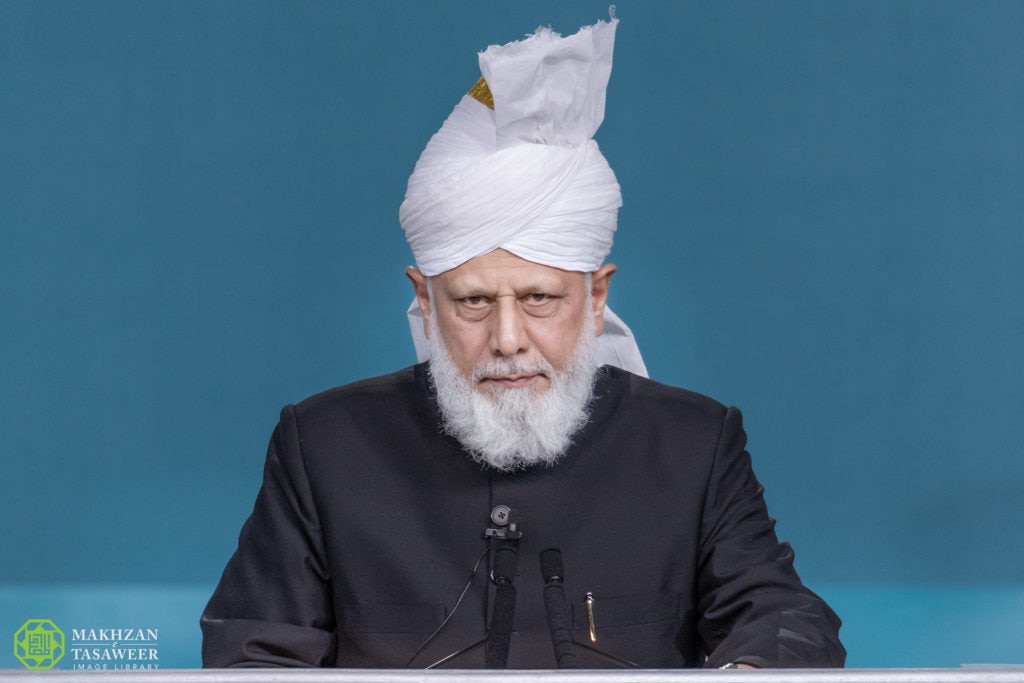 His Holiness mentioned that, sadly, it was increasingly common to fail to show affection and basic human sympathy in today’s materialistic world.  If someone is left hungry, they do not care for them, or if someone has financial issues, they do not spend their own wealth to cover the shortcomings of the other.

Hazrat Mirza Masroor Ahmad mentioned that whilst non-religious people make allegations against religion and Islam in particular, a recent survey showed how charity is donated mostly by religious people and Muslims are amongst those who give to charity the most.

His Holiness went on to narrate verses of the Holy Quran that outline how Islam makes it incumbent upon its followers to fulfil the rights of all sections of society. 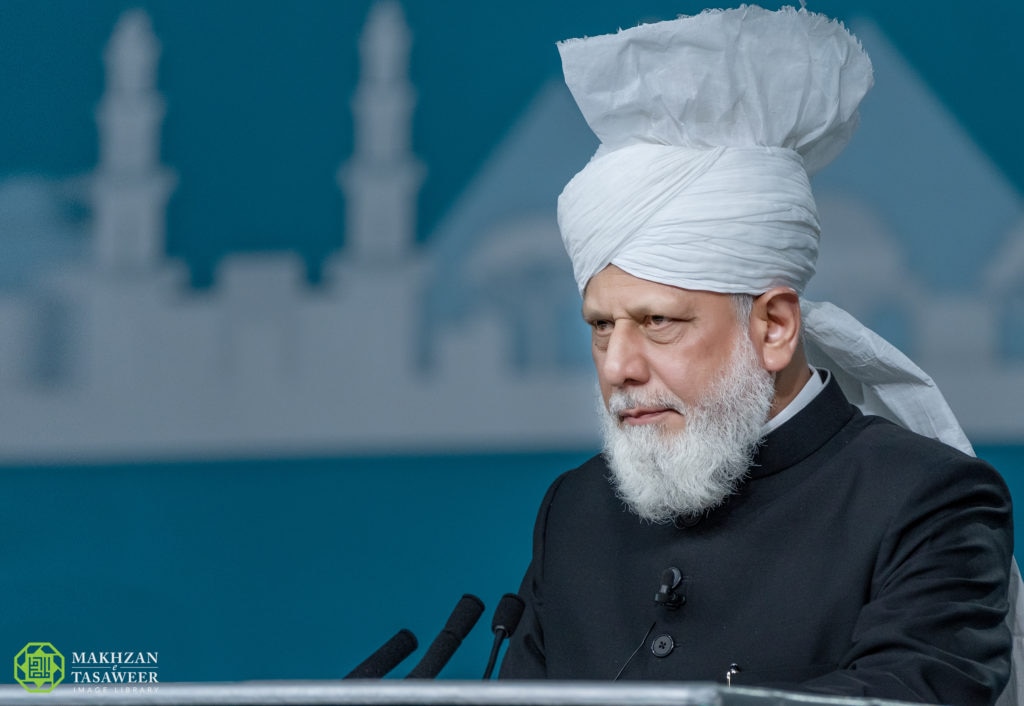 On the rights owed to one’s parents, Hazrat Mirza Masroor Ahmad quoted chapter 17 verse 24 of the Holy Quran which commands Muslims to show absolute kindness and even instructs to “never say unto them any word expressive of disgust nor reproach them, but address them with excellent speech.”

“Those who claim to be proponents of human rights today are in fact creating greater distances between parents and their children. If parents caution their children or try and correct their morals, certain organisations turn up in objection to the parents and begin to interrogate them. People are becoming agitated and are now objecting to this.”

“The Holy Prophet(peace and blessings be upon him) upheld the rights of even the children of one’s most ardent enemies. The Holy Prophet (peace and blessings be upon him)vehemently reprimanded an army that had targeted children… Yet today there are governments who claim Islam to be cruel and unjust who are separating parents from their children in the most inhumane way and they consider their own action to be just and moral.”

His Holiness then went on to elaborate upon Islam’s teachings on matrimonial matters and explained that the Holy Prophet Muhammad (peace and blessings be upon him) stressed the rights of women so much that he said, ‘the best amongst you is he who is best toward his wife and I am the best towards my wife.’ 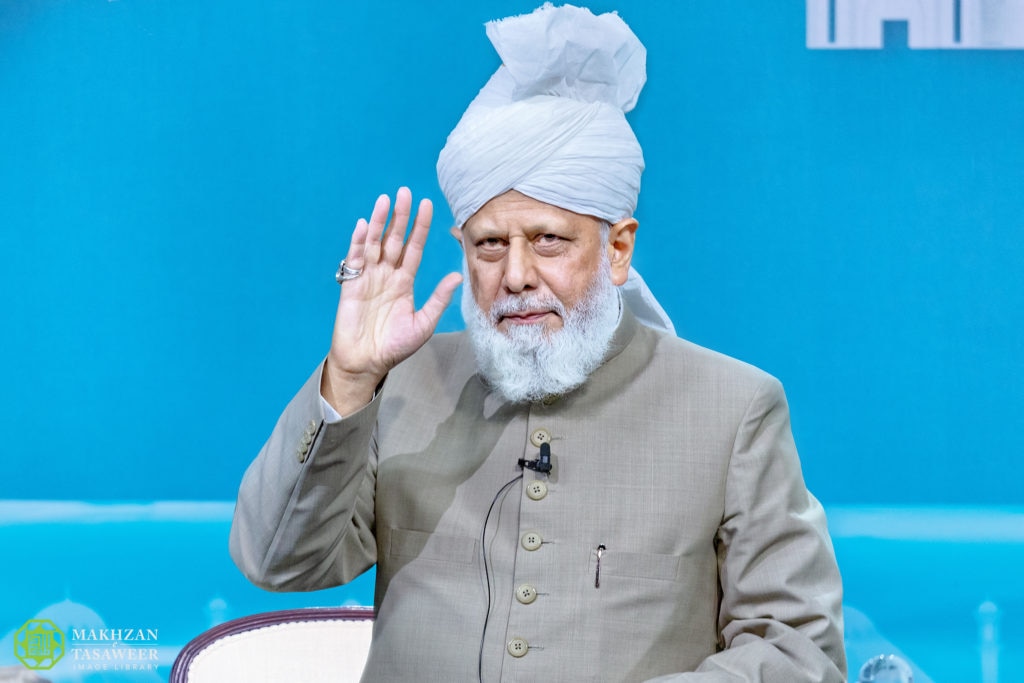 His Holiness voiced the rights the Holy Quran laid out for siblings and relatives and for mankind in general.

“The Holy Prophet(peace and blessings be upon him) commanded Muslims against harbouring prejudice or hate between one another and said that it is unlawful for a believer to cease speaking to another believer for more than three days.”

His Holiness drew the attention of the attendees towards the rights of widows, the elderly, employees and many others, all of whom have their rights upheld and explained by Islam in great detail and intricacy.

His Holiness highlighted that he could only mention a small number of the rights that the Holy Quran has upheld and there are countless others which could not be discussed in a short period.

During the course of the Jalsa Salana, His Holiness delivered five addresses, including an annual report of the Ahmadiyya Muslim Community. 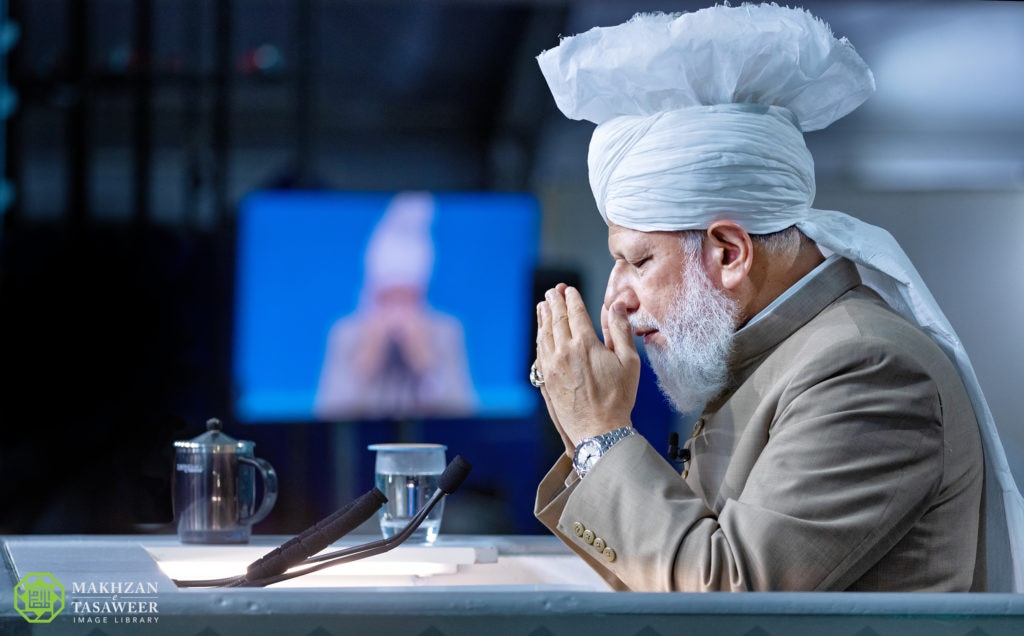 Various other lectures and speeches were delivered during the course of the three days. Further, various exhibitions were displayed such as ‘Islam in the Media’, the ‘Shroud of Turin’ exhibition and exhibitions on the historic letters of the Holy Prophet Muhammad (peace and blessings be upon him) sent to world leaders.