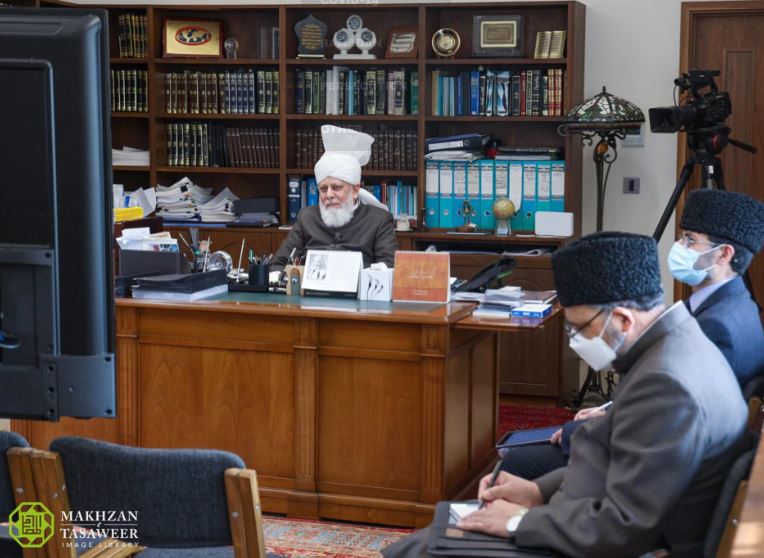 “It is Allah who has changed me” – Hazrat Mirza Masroor Ahmad

On 23 January 2021, the World Head of the Ahmadiyya Muslim Community, the Fifth Khalifa (Caliph), His Holiness, Hazrat Mirza Masroor Ahmad held a virtual online meeting with 50 male members of the Waqf-e-Nau Scheme from Indonesia.

His Holiness presided the meeting from his office in Islamabad, Tilford, whilst the Waqf-e-Nau members joined from the Ar-Rahmat Hall at the Al-Hidayah Mosque complex in Jakarta.

The event started with the recitation of the Holy Quran, followed by a poem and a presentation and brief report outlining the activities of the Waqf-e-Nau in Indonesia. 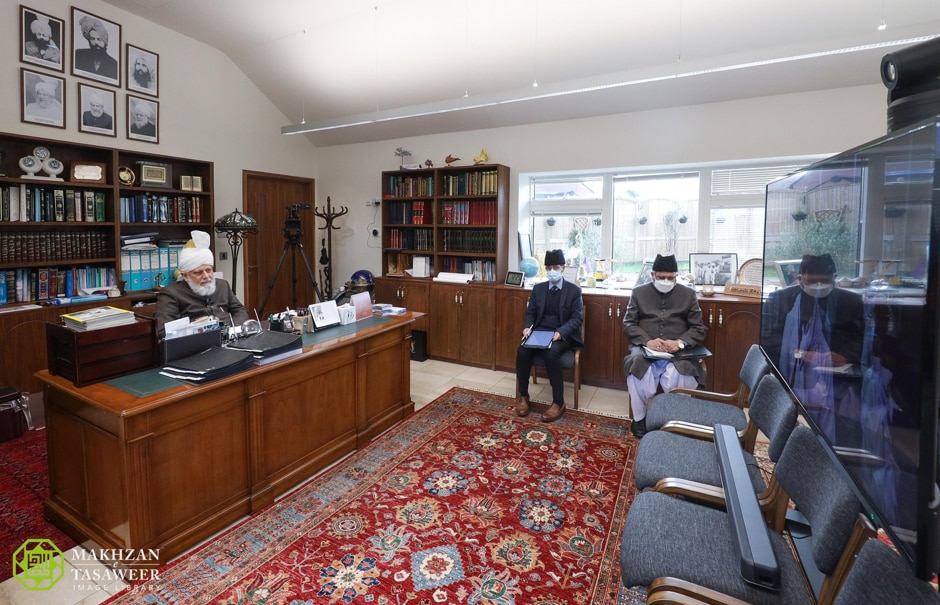 For the rest of the one-hour meeting, members of Waqf-e-Nau had the opportunity to ask His Holiness a series of questions regarding their faith and contemporary issues.

Responding to a question about how to ensure a successful marriage, Hazrat Mirza Masroor Ahmad said:

“Always think that you, as a husband, must set a positive example in your home and always remember that if the relationship between a husband and wife is not good then your children will suffer and in this way you will be destroying the future of the next Ahmadi generation. So, the best way is that the husband should set a good example within the house and he should always be polite and kind to his wife and children. If he behaves like this then there will be no trouble in his house and his children will get better training and education and they will improve their behaviour also.”

In response to a question on climate change and how it can be tackled, Hazrat Mirza Masroor Ahmad said:

“Climate change is a problem everywhere, all across the world. Especially in the third world countries where the population is increasing disproportionately. Just to accommodate the increased population, nations are developing new residential areas and because of this, forests are being cut and this deforestation is a major cause of climate change. So you have to be very particular that whenever one tree is cut, two trees should be planted in return.”

“Fuel consumption should also be reduced. Now people have become so lazy that if they want to go from one place to the other place and the distance is only 100 yards or 200 yards, instead of walking to the place they use their motorbike or car. In this way pollution is increasing. There are so many other factors which are also causing pollution and climate change. So we have to be very careful. Although, we cannot say that because of the fear of climate change we should not have children.” 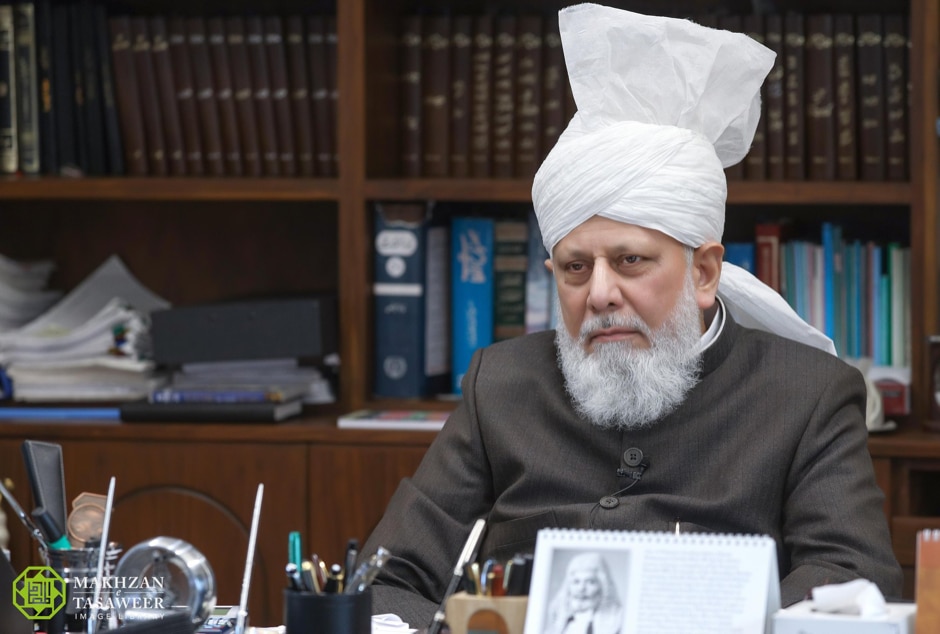 His Holiness went on to explain that human beings should do all that is in their capacity to combat climate change and change their ways for the sake of the future of the human race.

His Holiness referred to the specific effect of climate change in Indonesia, where its capital city Jakarta is said to be sinking under rising sea levels and is at risk of submerging during the coming decades. His Holiness said it was not that only Indonesians were afflicted by climate change and nor were they particularly causing it through their means of living. Rather climate change was a global phenomenon, both in cause and effect.

“The Ahmadiyya Muslim Youth Association (Majlis Khuddamul Ahmadiyya) and Waqf-e-Nau should start a scheme for the plantation of trees in the forest and in different areas.”

His Holiness was asked if Waqf-e-Nau members can enter politics or the civil service. His Holiness said it would be good for more Ahmadi Muslims, including members of the Waqf-e-Nau scheme, to enter public service and to strive to establish better human rights for all people.

In response to a question about how those who are Waqf-e-Zindighis (life devotees) of the Ahmadiyya Muslim Community can maintain the spirit of dedication to the cause of God Almighty, Hazrat Mirza Masroor Ahmad said:

“Being a life devotee, always remember that you are doing your work for the sake of Allah and always think that whatever you do, Allah is always watching over you. And if Allah is seeing us in whatever we are doing, then we should do our work honestly and sincerely. So always remember that we have to do all our work to seek Allah’s pleasure. So if a person is working with this spirit then they will serve honestly and with sincerity. Further you must pray to Allah that He may help you to discharge your duties honestly and sincerely.” 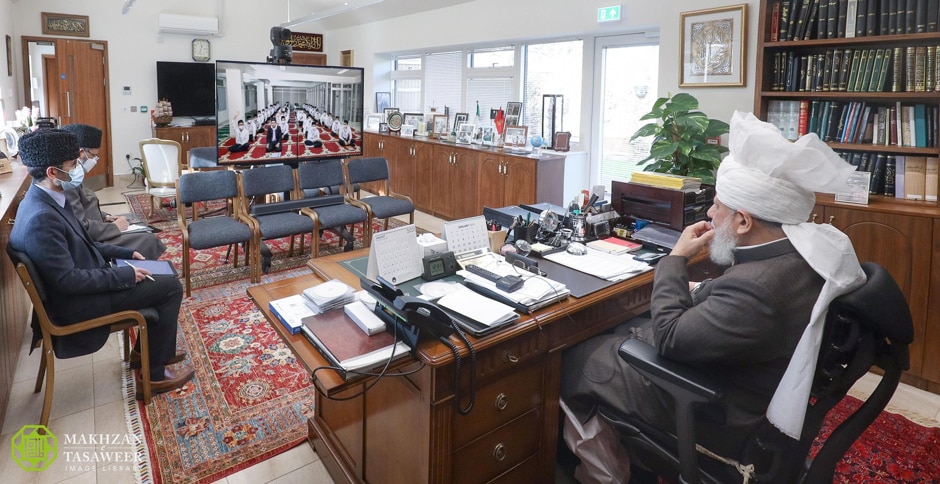 Another questioner asked what success means in this life and in the Hereafter and how to achieve both.

“As far as this world is concerned, whatever you are doing, wherever you are working, do your job honestly and sincerely… Allah the Almighty has asked that whatever assignment or work is given to you or any job is entrusted to you, then you should do it honestly.  In terms of the Hereafter, Allah the Almighty has said that there are certain obligations one must fulfil and these are, that he prays to Allah five times daily and seeks Allah’s help with regards both his worldly and spiritual endeavours.  Also, be kind and brotherly to your fellow beings. In this way you can also please Allah and in the Hereafter also you will get reward.”

One of the Waqf-e-Nau mentioned that he learnt from some documentaries that before being elected as the Caliph of the Ahmadiyya Muslim Community, His Holiness did not like to be the centre of attention and so he asked His Holiness how he adapted to the new circumstances.

In a short but insightful and powerful response, Hazrat Mirza Masroor Ahmad said:

“I don’t know myself. It is Allah who has changed me. That’s enough.”

Another question was asked to His Holiness on how a person can eliminate laziness.

At the end of the meeting, whilst praying for the Waqf-e-Nau, Hazrat Mirza Masroor Ahmad said: