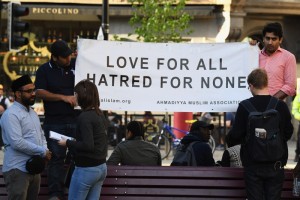 Ahmadiyya Muslims attended the London and Manchester vigils wearing T-shirts with the slogan: “I am a Muslim, ask me anything.”

In a small mosque in south London, a congregation of men humble themselves in united prayer, led by the fifth Caliph of the Ahmadiyya Muslim Community, Mirza Masroor Ahmad.

But Salim, five, is finding it hard to concentrate. The specific distraction is the small group of people at the back of the room, who sit watching in two rows. They are not part of the congregation, but guests of the mosque, invited here to experience the breaking of the fast in the holy month of Ramadan.

The Fazl mosque, the oldest mosque in London, and the headquarters of the Ahmadiyya Muslim Community has an open door policy. Breaking the fast is one of their many community engagement activities, which also include door-knocking campaigns and holding community talks to encourage dialogue and understanding of their faith.

They openly condemn all attacks by Islamist extremists. Ahmadiyya Muslims attended the vigils following recent atrocities in both Manchester and London, bearing placards expressing unity and wearing T-shirts with the slogan: “I am a Muslim, ask me anything.”

To the outside observer, they may seem like the representatives of the British Muslim community, attempting to soothe community relations at a tense time. And they are. But Ahmadiyya Muslims do not just face Islamophobia, but persecution from Islamist extremists as well.

In the Southfields mosque, the Ahmadiyya women I speak to are proud of the community’s recent efforts. “It has really encouraged people to ask questions what they might otherwise be scared to,” says Salma Manahil Tahir. “My husband even wears the T-shirt to the gym.”

Part of their message is drawing a distinction between their beliefs in “true Islam”, and that of extremist attackers.

Salma was born and brought up in Surrey. “My upbringing as a Muslim has groomed us to be a good part of society,” she says, “[But] now, with the recent attacks, I am scared to go outside.”

The attacks are associated with them, she adds: “Unfortunately, what people forget is that normal Muslims also fear this kind of terrorism. There is a general fear that living in this country I would never have thought I would have.”

Muslims, along with other Brits, have been caught up in terror attacks, from the Muslim MPs trapped inside Parliament during the Westminster attack, to the Afghan who fled the Taliban only to perish in the London tube bombing of 2005. But Ahmadiyya Muslims are subject to a particularly sinister type of persecution.

In March last year, the extremist Sunni Muslim Tanveer Ahmed murdered the Glaswegian Ahmadi shopkeeper Asad Shah. The murderer drove from his home in Bradford to Glasgow, where he violently attacked Shah with a knife.

He was sentenced to a minimum of 27 years for what the judge called an “appalling display of merciless violence” against a  “peaceful and peace-loving family man who went out of his way to show respect for those of any faith”.

Shah, considered a pillar of the his local community, had already fled persecution once, in Pakistan. Strict blasphemy laws there mean the Ahmadiyya community are persecuted and denied basic civil rights including the right to vote.

The Ahmadiyya Muslims believe in all the basic principles of Islam including on all the main articles of faith. However, unlike other groups including the Shia and Sunni Muslims, the Ahmadiyya believe that the long awaited Messiah came as Mirza Ghulam Ahmad (1835-1908) who set up the group in 1889. It is this differing belief that has led to the persecution of the group by other Muslim groups.

“If you refer to me as a Muslim in Pakistan, you can be imprisoned and if I describe myself as a Muslim, it is punishable by death,” explains Sabah Ud Din, a trainee Imam. “As a community what we really want to show is that we are all affected, we are all hurt. My father is a policeman in Manchester and we stand with all affected.”

The Ahmadis of Southfields hope that they can set an example of community cohesion after extremist attacks.

The national vice president of their Muslim youth association, Farooq Aftab says: “What we are saying is, here is a model that is working and if you want to see Islam, look at the Ahmadiyya Community,” He adds: “We are Muslims and we are not extremists, our young people do not turn to Islamist views and we do not preach hate.”

He credits this to the specific, almost governmental organisation around which the community is organised.

The Caliph, the group’s spiritual and organisational leader, is elected by an electoral college who choose from a selection of proposed names. Each country in turn has a president and main cabinet that looks after their faithful, under the overall leadership of the Caliph.

The community also has specific departments specialising in areas such as education, enterprise, youth engagement and community work.

The structure filters to the grassroots, with each country being further divided into hubs overseen by with regional leaders, department heads and a network of volunteers available for support.

“We are very organised and this allows us to keep an eye on our youth” explains Farooq. “We teach them the right way, we keep them occupied and we encourage them to ask questions.”

On the question of tackling extremism and hate, the Ahmadiyya community believes the answer lies in mentoring of young people. They welcome the community and police to “come and see who we are and what we teach here”.

This is the mentality that has led the visitors into the mosque. “The answer is in integration, not isolation,” explains Fatir Tahir, “Understanding that the extremist ideals are not part of our faith.

“The answer is in welcoming and engaging, and we welcome you anytime.”

Youth leader Usman Khan adds: “Essentially it is impossible to hate those you get to know and understand.”

Figures released by mayor Sadiq Khan show a fivefold increase in anti-Muslim hate crime in London since the London Bridge attack, greater than the rise witnessed after the murder of Lee Rigby in 2013 and the most recent attack in Manchester.

The Ahmadiyya community hope that they can help the public understand Islam, and reach out to disillusioned youth vulnerable to radicalisation. Islamophobia may be on the rise, but the door at Fazl mosque remains open.