Mayor of Barking and Dagenham helps to launch poppy appeal 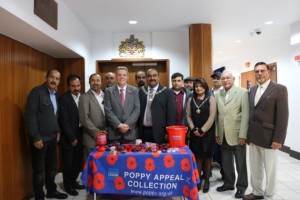 The pair joined members of the Ahmadiyya Muslim Elders Association at Barking Town Hall for the launch.

The group hopes to raise £50,000 for the Royal British Legion through selling poppies and other memorabilia in the run-up to Remembrance Day on November 11.

The charity helps former and serving members of the armed forces.