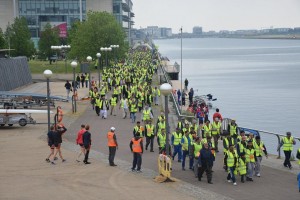 A Charity Walk for Peace is set to take place on Sunday April 29 on the streets of London.

Thousands of Ahmadiyya Muslims and charity supporters will walk for charities based around the country, including Stourbridge’s Mary Steven’s Hospice.Last year’s walk raised £600,00 for charities annually, including £500 for the Oldswinford-based hospice.

Wasim Shah, spokesman for the Ahmadiyya Muslim Elders Midlands Chapter, said: “The Ahmadiyya Muslim Community’s long standing motto is ‘Love for All, Hatred for None’ and this walk epitomised the very essence of this, where people of different religions and race came together under one umbrella for a common cause of building a better world.

“With so much suffering in society we must make every effort possible to help everyone. This is what our faith teaches us and this is what we seek to put into practice. This was a great year with half a million raised, but we must and will strive to do more and help even more people next time.”

Dan Malin, spokesman for Mary Stevens Hospice, added: “It’s a phenomenal fundraising event and a testament to all involved that they were able to raise such a remarkable amount for causes all over the country.

“For us, it’s a wonderful privilege to have been chosen as one of the charities supported by this event and the money raised will make such a difference to the families relying on our care here.

“As well as this fantastic walk, the local Ahmadiyya community also support us by offering to volunteer at events and lending extra pairs of hands around the hospice and we remain so grateful to them for their wonderful support.”

Since its creation by the Ahmadiyya Muslim Elders Association in 1985, the Charity Walk for Peace has raised more than £4.2 million for causes across the UK.