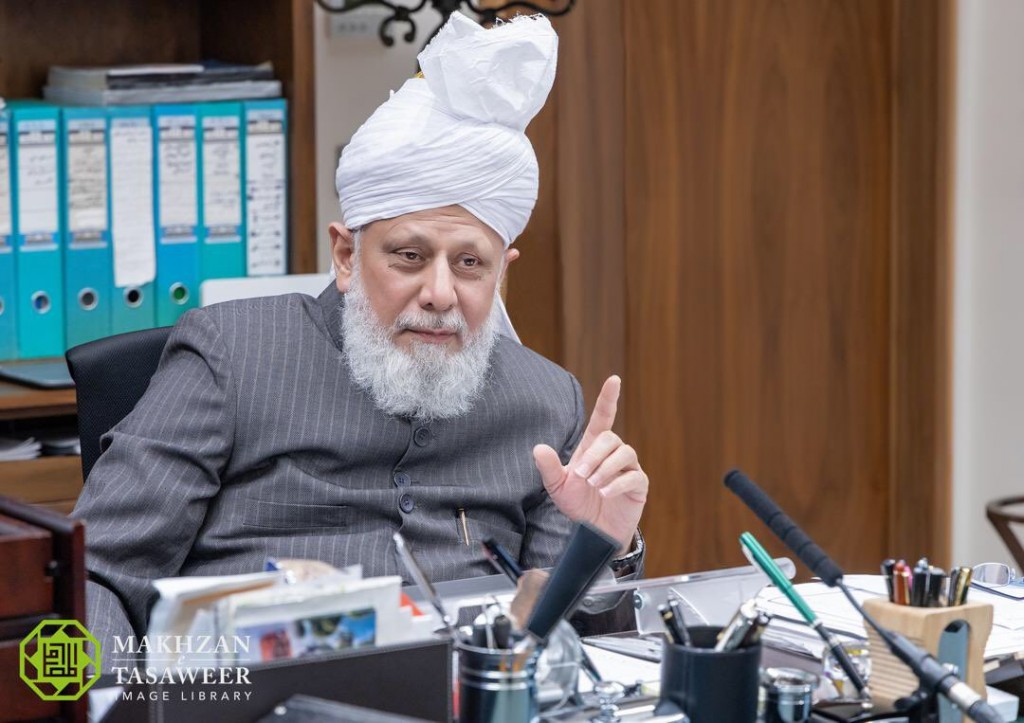 LOVE for all, hatred for none. It’s a wonderful motto, not least in these times of great tension and uncertainty, and one that the Ahmadiyya Muslim community puts into practice every day.

Forced out of Pakistan by religious persecution, and denounced as heretics by other Muslim states, one could forgive the leader of the movement (and now a Tilford resident) His Holiness, the Caliph Mirza Masroor Ahmad for feeling some bitterness at his plight.

Instead, the Ahmadi teachings, and that of His Holiness, are of “peace, love and harmony” – and it is this unifying message that binds together the community’s ten million followers spread across 200 countries worldwide.

Before Christmas, I had the honour of meeting His Holiness at the movement’s new global headquarters in Sheephatch Lane, Tilford (on the site of the former Sheephatch School).

Over the course of 40 minutes, we chatted about persecution in his native Pakistan, the battle against extremism, how he arrived in Tilford, the role of young people, women’s rights and more.

First though, I asked how it is that his community is increasing when other religions are on the wane, after it was reported in July that Christian belief has halved in Britain in 35 years while those identifying as Muslim has increased one per cent?

“Our work is a missionary work,” he said. “It was foretold by the prophet of Islam, that in the latter days a person will come to revive Islam. We believe that person has come, and the title of the person is Messiah and Mahdi.

“He is the founder of the Ahmadiyya Muslim community, and came to revive Islam and spread the true message of Islam, which according to our understanding, and what we have read in the Holy Quran, is peace, love and harmony.

“This is what we are spreading. And we are trying to gather Muslims on one hand so that they follow the teachings of Islam and spread the message of Islam, but also to other faiths and other people of the world – even those who do not believe in God. And this is how our community is increasing. This is our mission.”

His Holiness’ election as the fifth caliph of the worldwide Ahmadiyya movement in London in 2003 marked the first time in its history the community had appointed a new leader outside of the Indian subcontinent – and from the very outset of his reign, he found himself forced into exile from his native Pakistan.

Ahmadis have been subject to various forms of religious persecution and discrimination since the movement’s inception in 1889. But this escalated in 1974, when constitutional changes in Pakistan criminalised the religious practises of Ahmadis by preventing them from claiming they are Muslim or from “behaving” as Muslims.

“As long as that law prevails, the leader of the Ahmadiyya community cannot go back to Pakistan,” his Holiness continued, adding it remains his dream, and that of his followers, that one day they can return home.

“Those are the charges levelled against our community, and this is why we are facing difficulty in Pakistan and some other Muslim countries.”

The Ahmadi community has also played an active role in denouncing extremism globally, and His Holiness is forthright in his view that Islam is a peaceful religion and those committing acts of terrorism are not following the true teachings of his faith.

“These people, extremists, those who are committing brutalities in the name of Islam, are actually misconstruing the teaching Islam and defaming the name of Islam. Islam is a peaceful religion, so much so that the Quran says that even a person who says to you ‘salaam’ (peace) then you have to reply in the same way.

“Those who are committing all these brutalities, they have their own vested interests. It has nothing to do with the true teaching of Islam.

“It’s clear in the Holy Quran that there’s no compulsion in religion or even punishment for blasphemy. It has never said in the Quran that any person who leaves Islam should be beheaded, as extremists believe. I don’t know where did they get this commandment from?

“They are just defending the name of Islam for their own religious interests.

“Jihad, for example, means struggle. And the Holy Prophet of Islam said the best jihad is to to reform your inner self – that is the true jihad.

“And that is why we say that this was the right time for the person to come to revive the true teaching of Islam.”

His Holiness also believes young people have a key role to play in combating extremist views, and the Ahmadiyya Muslim Youth Association (AMYA) is key to spreading his movement’s counter-message of Love for All.

In December, it was reported that AMYA raised more than £1 million for charity in 2019 – and in recent editions the Herald has reported on a busy festive season for young AMYA members locally, including litter-picks, care home visits, donations to foodbanks and feeding the homeless.

“We try to teach our children from a very young age the right way to live their lives according to the teaching, and involve them in our activities to serve the people, to serve mankind and teach good morals to them.

“That is the lesson to take, to live for their whole lives, and part of the training is to keep them away from extremism.”

A new era in the history of the Ahmadiyya community began in May when His Holiness delivered his first weekly Friday sermon from the new Mubarak Mosque in Tilford, broadcast live around the world on the Ahmadi’s own satellite TV network MTA International.

But why relocate the community’s global headquarters from London to Tilford?

“It’s pollution free!”, said His Holiness, adding: “When my predecessor migrated from Pakistan, immediately after his arrival here, they started searching for some piece of land. Fortunately, this area was available at that time and he liked it, and the council here also agreed to give that area to a religious community. And I like this area too.

“Do you know the history of Sheephatch Lane? You see, in olden days, Jews came here to settle and during the raining season used to keep their sheeps here on the higher ground. So that is why the name was given to this area – Sheephatch Lane.

“I have asked somebody to search more on it, and we shall write the history of this area. Right from the very beginning.”

The Ahmadiyya community relocated its annual Jalsa Salana convention from Tilford to Oaklands Farm in East Worldham, near Alton, in 2004 to accommodate a growing number of attendees – and the event now attracts around 40,000 people from all over the world.

The yearly influx of traffic on local roads has caused friction with neighbouring residents and parish councils, however, and concerns have been expressed at plans to further extend the Jalsa site.

Responding, His Holiness said the Ahmaddiya community has worked hard to “lobby” local residents and authorities, and sought to reassure those with concerns that the convention would never reach “concert” levels and that the impact on local roads “will remain the same”.

“We are not looking to widen the road”, he added, referring to the B3004 which runs parallel to the Jalsa site between Alton and Kingsley.

Despite his strong beliefs, His Holiness has long advocated the separation of the state and religion – so what are his views on East Hampshire District Council putting an end to prayers before meetings, as reported last July?

“Here [in England], for some time the Church of England had some interest in the government, and now it is more separate. So in the same way, I believe that religion should not interfere in the matter of state.

“Everyone can offer a prayer in their own way, but there should not be any compulsion.

“In Pakistan, they have enacted the law against Ahmadis and they are declaring us not Muslim for the purpose of law and constitution, and say you cannot take part in the election of the country as a citizen of Pakistan.

“You see, state has interfered in this way, but what has law and constitution to do with religion?”

But what about the rights of women? In October, His Holiness delivered a keynote address to UNESCO stressing the importance of ensuring that girls are educated and given equal opportunities as boys. And yet men and women remain segregated at Jalsa Salana.

Explaining, His Holiness said: “Separate venue, not value. Separate halls or marquees for women and for men, but the values are the same and the separate place has nothing to do with their teaching, their skills, their potential.

“It’s a matter of understanding. Our women feel that according to our teaching, if they hold their meeting separately and without the umbrella or shadow of men, then they can do better.

“There are quite a number of women engineers, doctors, and other skilled women from our community and the whole system is organised and administered by the women.

“Even the national president of our youth association, a woman, is a practising doctor. There are teachers, architects and computer specialists, programmers too.

“Although at Jalsa, they listen to the addresses on the men’s side also, and at the same time, I also go to the women’s side to give my address to them, in their marquee.

“So this is why we believe that if they are kept separately they can flourish more, they can show their potential in a better way than if under the shadow of humanity.”