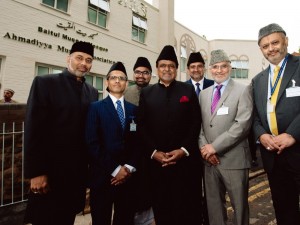 It has been a long road and a difficult journey, but celebrations were in abundance yesterday among the Walsall Ahmadiyya Muslim community as they attended the grand opening of their new town mosque.Religious and community leaders at the opening of the new mosque in Vicarage Place, Walsall

The £500,000 Baitul Muqeet Mosque and community centre was created out of a disused warehouse in Vicarage Place, and has been an ongoing project for nearly 10 years.It faced heavy opposition when plans were first released, with hundreds of people descending on the town hall to fight against it in 2009.Four petitions were submitted against the application, bearing 848 names.The mosque was built at a disused warehouse which had been empty for years

Member Khurram Rehan said the local Muslim community now felt a ‘sense of achievement’ in finally seeing the facility open.However, he added he was sad police protection had to be arranged for the launch, due to a ‘safety threat’.Mr Rehan said: “Our type of Muslims are being persecuted in Pakistan at the moment, which is why many of us are in the UK. That’s the beauty of living in the UK, there’s a freedom of speech.

“But some individuals are almost offended by our beliefs. It does make me sad, but we had to have a police presence – they are fully aware of the threat and were briefed.Children wave Union Jack flags at the opening of the mosque”It’s almost a risk to our lives, that’s how severe the threat is. We live in a law-abiding peaceful community, and we just want to give back to our community.”

Hundreds of men, women and children turned out to a ceremony where they witnessed the arrival of worldwide head of The Ahmadiyya Muslim Association His Holiness Hadhrat Mirza Masroor Ahmad.Living in London, he had travelled to Walsall when building work first started so he could bless the site, but this weekend made another visit to see the finished building.

Hundreds of people turned out for the opening ceremonyHe made a speech to first the men in the mosque, then visited the women to greet them and hand out chocolates to the children – a grand dinner followed.Nuzhat Ahmed, who attended the festivities, said she felt ‘extremely happy’ to finally see the mosque open.She said: “We’re very, very pleased after so many disappointments. It’s been a long battle, but we made it by the grace of God.”The group won an appeal five years ago to build the mosque after it was rejected by Walsall Council.But the time limit to start work had passed and a fresh planning application was required, which set them back even more.The disused warehouse in the St Matthews ward had been left empty for a number of years before its conversion to a mosque.The group used to worship at the rear of a commercial building in Bradford Street.