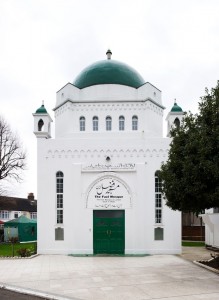 The Fazl Mosque (opened 1926) is the international headquarters of the Ahmadiyya Muslim Community and has been Listed today at Grade II by the Department for Digital, Culture, Media and Sport for the mosque’s historic, architectural and cultural importance.

Built to the designs of nationally renowned firm T H Mawson and Sons, the Fazl Mosque is a fusion of Indian Mughal architectural forms with contemporary British stylistic trends – the spherical dome on its buttressed square base resembles the 1923 twin towers of the Wembley British Empire Exhibition Stadium.

“It is a great honour for the capital’s first purpose-built mosque to be Listed. The Fazl Mosque – also known as The London Mosque – has served the Ahmadiyya Muslim community, as well as the wider community, for nearly a century and it is fitting that its importance has been recognised. 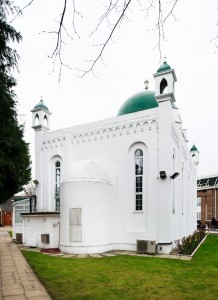 “The mosque complex is of global importance as the main mosque used by the Caliph, or worldwide spiritual head, of the Ahmadiyya Muslim Community, His Holiness Mirza Masroor Ahmad. Its importance is also denoted by many eminent personalities who have visited it – including the founder of Pakistan, Muhammad Ali Jinnah, The Crown Prince of Saudi Arabia, Faisal Bin Abdul-Aziz, his predecessor King Saud and many other Heads of State, Secretaries, faith and civic leaders.

“More recently, HRH Prince Edward has visited in his capacity as Patron of the London Gardens Society, and the Fazl Mosque’s garden has won a number of awards.

“The Mosque provides a beacon of hope for the future. It served as a bomb shelter for local people during the Second World War and was the base from where the community launched its support for the Poppy Appeal which has spread to mosques across the UK.

“Recognising and preserving the mosque as a Grade II Listed building will help to retain its heritage and its unique place in British history.  The mosque is an enduring testament to the peaceful ethos of the Ahmadiyya Muslim Community: Love for All, Hatred for None – a message that is reflected in every aspect of the community’s work in the UK and across the world. 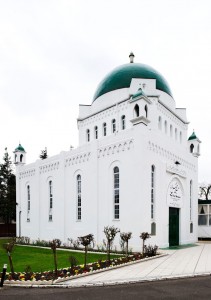 “Our historic buildings tell the story of Britain’s past and the people, places and events that shaped them. By listing these beautiful mosques, we are not only preserving important places of worship, but also celebrating the rich heritage of Muslim communities in England.”

Duncan Wilson, Chief Executive of Historic England, the public body that champions and protects England’s historic places, said: “I’m proud to be shining a light on these exceptional places of worship established by Muslim communities in England. Through listing we are celebrating some of our most significant examples of Islamic heritage.