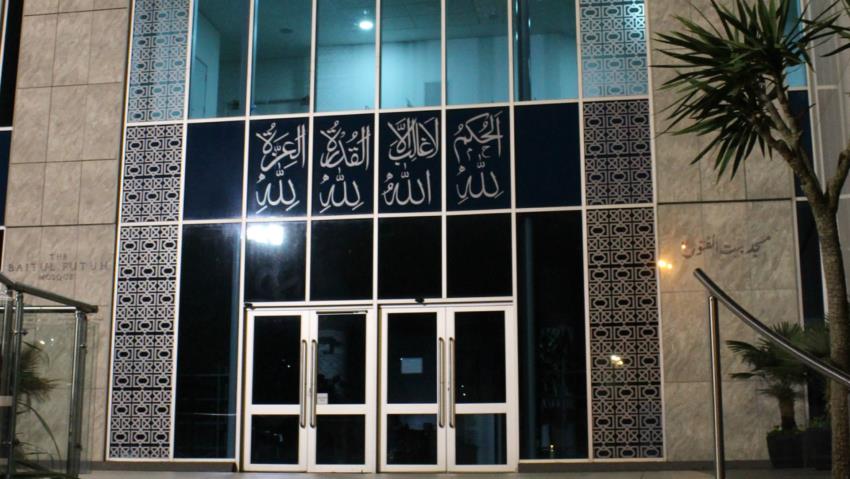 Around 6.00pm on Friday evening, December 21, Baitul Futuh mosque in Morden is domineering and still. The lights have been turned out in Britain’s largest Muslim place of worship, belonging to the Ahmadiyya Muslim Community (AMC), a relatively new sect of the faith having been incepted just before the turn of the 20th century.

Leaving the daunting structure, I’m led to another more lively wing of the complex, where the Ahmadiyya Muslim Youth Association (AMYA) are busily preparing drums of food to package and haul into central London as part of a massive drive over the winter period.

Over 1,000 AMYA members across 148 chapters throughout the country are planning to volunteer between December 15 and January 1 in order to help fight loneliness and serve other vulnerable people, visiting hospitals and care homes, spending time with the elderly, giving out flowers, gifts and cards and distributing food to the homeless.

In some places such as Yorkshire, AMYA taxi drivers are offering free taxi services to help the elderly get to prayer services. Others are holding blood drives and working with local charities to support tree planting sessions. The campaign plans to end on New Year’s Day with a massive cleaning initiative, where volunteers will be picking up litter from the streets.

The initiative not only comes at a season of heightened vulnerability, it’s taking place where the statistics in England, and Britain, are stark.

According to Age UK, there are 1.2 million chronically lonely older people in the UK, over 2.2 million people aged 75 and over live alone in Great Britain, a figure which has increased over the last 20 years. Last year, the age related charity released research to show that nearly one million people feel lonelier at Christmas.

When it comes to homelessness, estimated numbers vary – charity Crisis estimate 20,000 in England and Shelter has said there are 320,000 homeless people in Britain. In any case, organisations believe numbers to be a lot higher than the government-estimated rough sleeping counts, which was last recorded to be 4,751 in England, according to the Office for National Statistics. Almost 600 people living on the streets died in England and Wales last year.

Sabah Ahmedi, an AMC Imam, explains that what they’re doing is linked to their faith: “Islam teaches that loyalty to your nation is part of your faith. So looking after those who are part of your nation, is part of Islam.” He adds that they do it on a weekly basis – Ahmedi speaks among the crowd of volunteers that Friday evening, where children and adults between seven and 60 years’ old had joined in the effort to help cook, pack and then go on to distribute the food.

But with Christmas being that time of year that’s focused on family, those already lonely could be hit harder, Ahmedi says by having a big holiday drive, those people “can also feel they are part of something and belong somewhere.”

“I remember one gentleman saying that what some of the youth were doing was actually ‘saving our lives’,” pipes up Qamar Zafar, one of a pair of twins who also both graduated as Imams recently, by relieving some of the loneliness felt.

He admits some people are a little sceptical when they’re seen approaching with their beards and other hallmarks of the faith, that they’re half expected to start preaching. But he insists that’s not what they do at all, although “it serves a dual purpose,” Zafar says because it dispels the negative image people have about Muslims.

Although inadvertently there seems to be a third goal as well. As we await for the cars to be loaded with food and donated clothes, Zafar points to some of the members, making reference that they’d had a hard time lately.

With some having lost loved ones or who were in need of medical attention, he says the community acts as a support network for them and getting involved in the charity work distracts them from their own personal challenges.

AMC describes itself as a revival movement in Islam, started in 1889 and present in over 200 countries with tens of millions of members. It’s the only Islamic organisation with a living Khalifa, Mirza Masroor Ahmad, and they believe the Messiah has already come in the person of Mirza Ghulam Ahmad, who lived 1835-1908.

Being quite big on charity and missionary work, the Imams who graduate, like Sabah and Qamar, who at 24 represent the millennial contingent, go overseas to help out.

The Ahmadiyya are also widely known to be persecuted, particularly in Pakistan and India where they’re not considered Muslims. While in the West, discrimination is not so acute, Zafar says there have been some clerics who’ve written against the community and when it comes to integration with mainstream Muslims, he says, they don’t seem to want to know.

On reaching Charing Cross, the AMYA team park up and join a seemingly popular spot, near adjacent to the main train station off the Strand.

Doris Portilla is another volunteer who comes to the area every last Friday of the month with her church. For Christmas they were front and centre among the numerous other volunteers and those who they’d come to try and help, giving out hot food and clothes.

The rest of Portilla’s group catches quite a bit of attention with the music blaring, dancing in yellow high vis vests and Santa hats.

“We are celebrating Christmas, it’s Jesus birthday,” she explains. “Everything we bring is homemade, we believe sharing is love.”

While Portilla and fellow church goers occupy the space every month she admits that over the ten years they’ve been coming, they see a lot of groups at this time of year.

In fact, having been served up a number of offerings, some of those sleeping rough on the streets politely decline AMC’s food as they had received enough for the night.

“That’s something you’d never see at any other time of year,” says Zafar.

AMYA are still pushing forward however. Kashif Khan, AMYA’s Welfare Officer, says their Christmas drive this year is the biggest they’re attempting. Last year they managed to feed around 4,000 people in December while this year their target for distributing food is 7,000 – 1,500 on Christmas Day alone. Ambitious, but Khan says they have more volunteers now too.

“We’re trying to get more of our younger volunteers involved,” he says, giving them first hand experience of how tough it is on the streets and a sense of responsibility.

While some may be overwhelmed by the effort, others are deeply appreciative, either as their first meal of the night or something to save for later, and also for just being around.

Walking through the subways of Charing Cross station, where some have taken shelter from the bite of a December chill in England, they meet a man and woman clearly settled in for more than the night.

Lining their makeshift bed with a decorative traffic cone topped with a star, and displaying their cards and whatever can come close to Christmas cheer, they laud the group with their tray of foiled packed rice and lentils and bottles of water, “Thank you so much,” the gratitude was not meant only for the food but for also acknowledging that they’re there.