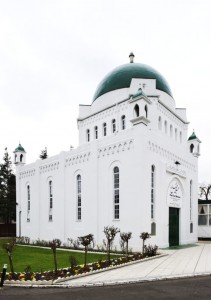 Two London mosques have been given protected heritage status to recognise their historic, architectural and cultural importance.

Britain’s first purpose-built mosque, in Woking, Surrey, has also been given greater protection, with its listing upgraded to Grade I, and the first functioning mosque in the country, in Liverpool, now has Grade II* status.

The London Central Mosque and Islamic Cultural Centre in Regent’s Park, built as a centre point for Muslim worship in London and a landmark of the faith in Britain, is newly listed at Grade II*.

The first fund for the new mosque was set up in 1910, and the Government under Winston Churchill offered the site as its location in the 1940s in recognition of the importance of Islam in an increasingly multi-cultural society and in the then-Empire.

But construction of the building, which combined British modernism with historic Islamic forms and has a prayer hall which can hold several thousand worshippers, a golden dome and a 44m high (144ft) minaret, did not start until 1970 and was completed seven years later.

The Fazl Mosque, Southfields, which was the first purpose-built mosque in London and only the second such building in Britain, has been given Grade II status.

It was constructed in 1925-26 with funds raised by the Ahmadiyya Community in India and supported by voluntary labour.

It is a fusion of Indian Mughal architectural forms and contemporary British trends, with the spherical dome on the buttressed square base resembling the 1923 twin towers at the Wembley Stadium, but does not have the Orientalist style of the earlier Woking mosque as it had become associated with theatres, piers and amusement arcades.

The Shah Jahan mosque in Woking, which dates back to 1889, has been upgraded from Grade II* to become the only Grade I listed mosque in the country.

The Orientalist style mosque is now on the same standing such as Brighton Pavilion and Buckingham Palace, while the Salar Jung Memorial Hall which forms part of the complex is newly listed at Grade II.

Brougham Terrace, Liverpool, thought to be Britain’s first fully functioning mosque, has been upgraded to Grade II* status to reflect its importance in telling the story of the emergence of Islam in England.

The Georgian terraced house was bought in 1889 as a home for the Liverpool Muslim Institute, which was founded in 1887 by influential Muslim convert William Henry Quilliam.

And Howard Street Mosque, Bradford, which is already listed at Grade II, has had its entry on the heritage list updated to reflect its importance as a ‘house mosque’, converted from a home into a place of worship.

The new and upgraded listings, made by the Culture Department on the advice of Historic England, come as a result of research for the heritage agency’s new book The British Mosque.

Mr Ellis said: “Our historic buildings tell the story of Britain’s past and the people, places and events that shaped them.

“By listing these beautiful mosques, we are not only preserving important places of worship, but also celebrating the rich heritage of Muslim communities in England.”

“Through listing we are celebrating some of our most significant examples of Islamic heritage from the stunning Shah Jahan in Woking, the first purpose-built mosque in the country, to the landmark London Central Mosque in Regent’s Park.”