Letter To Commonwealth Heads Of Government 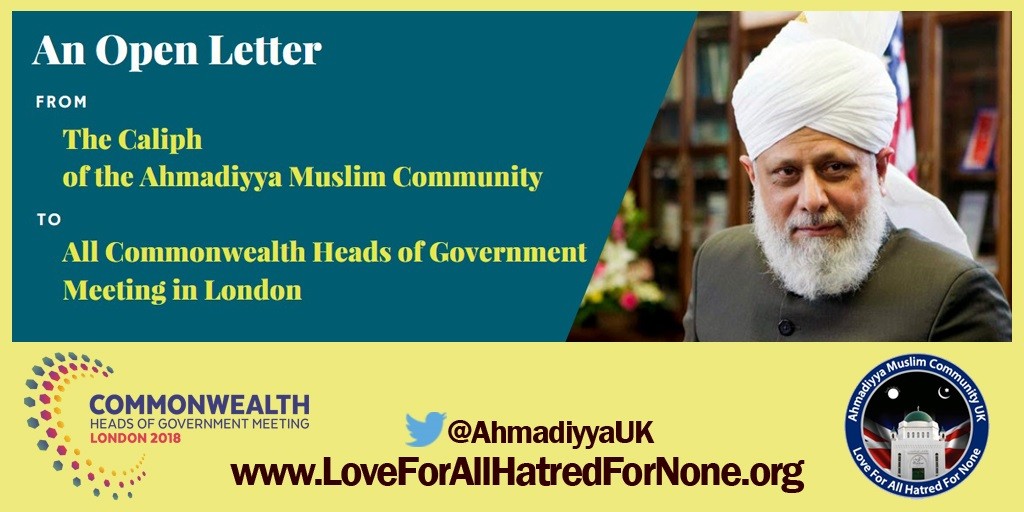 “The 2018 meeting of the Commonwealth Heads of Government comes at a time of great anxiety in the world. We are witnessing a deeply disturbing increase in conflicts and tensions between nations that is leaving a trail of death and heart-wrenching suffering for tens of millions of innocent men, women and children.

The rise in nationalism and the growing entrenchment of ideologies of opposing blocs is feeding a climate of mistrust, suspicion and hate. Economic and political superiority is becoming the driving force that is resulting in the usurping of human rights in favour of national interest.

This year marks one hundred years since the end of the First World War and soon after the world was again thrown into the darkness and horror of war that resulted in the terrible destruction caused by the Second World War. Yet it seems that man has not learned any lessons from history. For the same factors prevailing then are prevailing now and if the world continues along its current path then a further catastrophic conflict is, sadly, fast becoming a plausible reality.

As you gather in London for the Commonwealth Heads of Government Meeting, it is imperative that you use your goodwill, friendships and your mutual bond as human beings to renew and reinvigorate all measures that can generate peace. It is your moral duty to act with a greater sense of urgency to end the suffering of people across the world, to focus minds on education that leads to progress rather than turn a blind eye to the hopelessness and poverty that feeds resentment and revenge.

We are all God’s creatures and this implores us to act with greater love, compassion and absolute justice with each other to build bridges, to forge partnerships and to strive for the good of all – especially the weak and the vulnerable in society.

I pray that as you convene in peace you are able to rekindle a hope for peace, not just for the Commonwealth nations but for the whole of mankind. The Ahmadiyya Muslim Community is a peace-loving community that spans 210 countries and we stand ready to serve with all who seek to establish peace. May God bless your noble efforts with success. Ameen.”