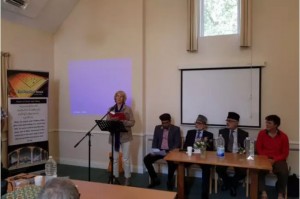 An interfaith conference was organised between members of the Ahmadiyya Muslim Association (AMA) Peterborough Chapter and the Peterborough Quakers. The event at the Quaker Meeting House in Thorpe Road aimed to show a unity for a tolerant and peaceful society. It began with the recitation of holy books and was followed by speeches from both sides, and a concluding question and answer session.

Hasib Zafar, the president of AMA Peterborough, said: “The Ahmadiyya Muslim Community believes the UK is a polycultural society, and the dialogue and unity amongst the different societies and faiths could play a vital role to defeat the wave of extremism and could eventually raise tolerance and mutual respect.”