Hundreds pay their respects at Remembrance Sunday events across Slough 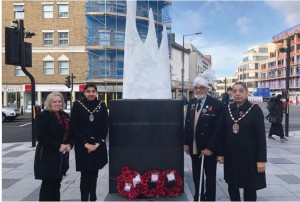 The group paid their respects during a service at St Mary’s Church, Slough, and a ceremony in Cippenham.

Youngsters from the organisation also helped marshal a parade through Burnham which travelled along the High Street before ending at the Cenotaph on the village green.

President Atiq Ahmad Bhatti said: “It is indeed a poignant time for us as a community as we join with so many others to remember the incredibly brave men and women who sacrificed their lives.

“Islam teaches loyalty to one’s country, and what can be more humbling than laying a wreath to remember those who fought for our freedom.

“It is always an incredible honour to be laying wreaths at the Remembrance Sunday ceremonies.”

War veterans attended a Service of Remembrance at Pinewood Studios to mark the 80th anniversary of the outbreak of the Second World War.

Among the invited guests were members of the Army Film and Photographic Unit (AFPU), based at Pinewood during the conflict, and 105-year-old Iver resident George Sibley who also served in the war.

All British studios were force to close down in 1939 but Pinewood became home to the AFPU and the RAF Film Unit who were tasked with compiling a visual record of the six-year battle.

John Aldred, 98, the oldest surviving member of the AFPU and cameraman Paul Clark, who covered the Japanese war crime trials in the post-war period, joined the event on Friday and shared their incredible stories.

Hundreds of people young and old turned out to pay their respects in Langley on Sunday.

A parade, led by members of The Household Cavalry Regiment, formerly based in Windsor, made its way along Parlaunt Road before finishing at Langley Memorial Ground.

Youngsters from 3rd Upton Beavers, Cubs and Scouts were among the people who took part in the day of remembrance.

A two-minute silence was observed in Slough High Street in tribute to the country’s fallen war heroes.

The Mayor of Slough Cllr Avtar Kaur Cheema and council leader James Swindlehurst joined war veterans and residents as they paused in remembrance at 11am.