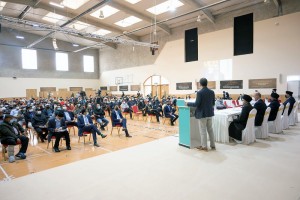 Surrey and London’s Ahmadiyya Muslim community has been commended for its work in helping to solve the UK’s HGV shortage issues.

The community has recently been hosting HGV pilot schemes at its 12,000 capacity Baitul Futuh Mosque in Morden, the national headquarters of their community.

He said: “Obviously there’s a national crisis on the HGV side and it’s impacting significantly on all aspects of delivery in UK life. So it was His Holiness [The Caliph, Hazrat Mirza Masroor Ahmad, based in Tilford] who said that we need to step up and take action, and do what we can to help the country in the time of need. That was where this came from.” 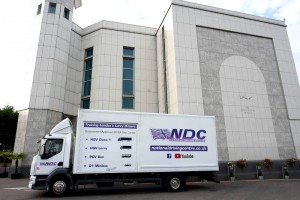 He said the community looked at what they could do and tried to understand the process for obtaining HGV licences and how to become HGV qualified. Their plan was to bring the experts in-house into one room as a one-stop shop for applying and recruitment.

It was great to speak to over 400 potential new HGV drivers at the recruitment event. Medical – practice tests – advice and forms all in one place. What a inspired event in the Morden Mosque organised by the @AhmadiyyaUK Muslim Community to help tackle HGV #drivershortage. pic.twitter.com/N22wanR3Mg

They worked with the driving school that provides training, as well as DVLA and DVSA for support.

On Sunday, October 17, they hosted their introductory session, with around 500 people registered to attend.

Presentations were given by the driving school about the requirements for becoming HGV drivers, and the medical side was also dealt with – talking about medical check-ups and what might require further tests, with medical tests conducted on the day.

There were MPs from Surrey and London as speakers, as well as the likes of Marc Fels, director of HGV Recruitment and Laurence Bolton, managing director with the National Driving Centre, who gave presentations on their fields of expertise.

One of the speakers was Chris Grayling, MP for Epsom and Ewell, who later told SurreyLive: “This was a fantastic event attended by people from across the country. We need more HGV drivers and the Ahmadiyya community are really stepping up in trying to help fill the gaps”. 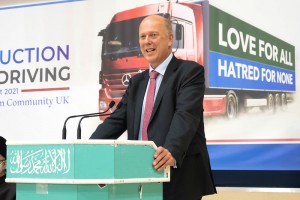 Only a very small amount of the mosque community themselves actually had HGV licences, but they were able to help with all the admin work as well as offering a space for the event to take place. Fareed explained there were 180 applications completed and sent to DVLA on the day.

Once drivers have received provisional licences, they can go on to access training and employment opportunities, and Fareed said they are looking into holding further events of this kind, perhaps in other areas of the country.

The Ahmadiyya community has hosted similar recruitment sessions in the past to find staff for the police and the armed forces, as well as carrying out vaccination drives and a ‘help a neighbour’ scheme throughout the time of the pandemic.

Rafiq Hayat, National President of the Ahmadiyya Muslim Community UK, said: “Our community has a proud history of philanthropy going back over a century. The point of this exercise is to respond to the national crisis, to ensure we play our part for the wellbeing of our country and contribute to its future success.

“Serving one’s country is a key part of the Islamic faith so it is our duty to do what we can to help.”