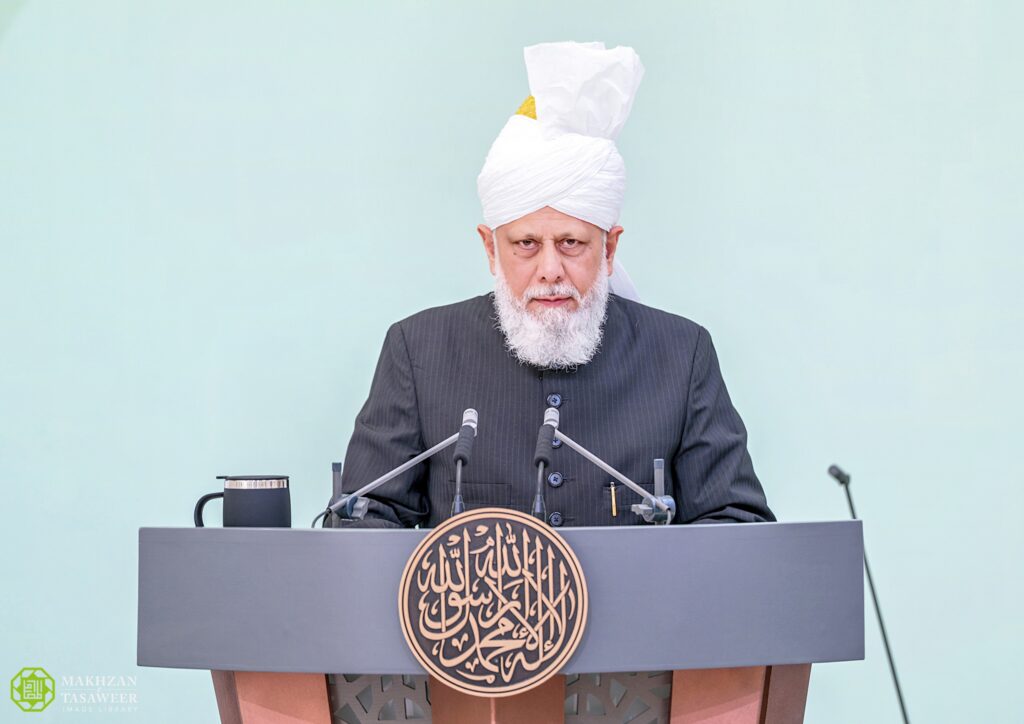 Speaking earlier today, during his weekly Friday Sermon, delivered from the Mubarak Mosque in Islamabad, Tilford, the World Head of the Ahmadiyya Muslim Community, the Fifth Khalifa (Caliph), His Holiness, Hazrat Mirza Masroor Ahmad condemned the recent republication of caricatures depicting the Holy Prophet of Islam (peace and blessings be upon him) recently in France. His Holiness also addressed comments made by French President, Emmanuel Macron that Islam was in a state of ‘crisis’ during a speech delivered last month.

“I wish to draw attention towards the fact that these days we, Ahmadi Muslims, need to pray even more fervently. Of course, we always pray for ourselves and for the Ahmadiyya Muslim Community, however we must also pray more generally for the Muslim world and Islam.

In this era, certain leaders of non-Muslim countries harbour sentiments of malice towards Muslims and Islam. Rather than believing in God Almighty, these leaders consider the public to be their gods. They lead their people astray by proclaiming that there is no God, whilst they consider the people whom they lead to be everything. Even if they do not explicitly make such comments, they harbour prejudice towards Islam. Regrettably, much of the public in the non-Muslim world is also against Islam due to their being unaware of its true teachings. Hence, it is the duty of Ahmadi Muslims to present the true image and representation of Islam to the world.

In recent days, if any Western leader has given a categorical statement about Islam – whilst others give similar statements but more cautiously – then it has been the French President. In a speech, he said that Islam is a religion in ‘crisis’. However, let it be clear, if anything is in crisis it is their own religion – that is if they even adhere to any religion. As far as Islam is concerned, it is a living, growing and thriving religion. God Almighty has ensured that it continues to spread throughout the world, and due to the efforts made by the Community of the Promised Messiah (peace be upon him), it is spreading to all the corners of the earth.

The truth is that these anti-Islamic forces and individuals are able to attack Islam in this manner because they are manifestly aware that there is no unity in the Muslim world. However, here it is also necessary for me to commend the Prime Minister of Canada, as he recently made a very wise statement where he said that comments that explicitly injure the religious sentiments of others should be abstained from. If only other leaders would learn from these comments made by the Prime Minister of Canada in the interests of the peace of the world.

It is obvious that the plight of the Muslim world is a result of the total lack of unity amongst the Muslim community. Muslim countries are fighting and competing against one another and the non-Muslim world sees this and exploits it. If the world knew that Muslims are one and believe in One God and One Prophet (peace and blessings be upon him) and that the Muslims are those who make sacrifices for their religion, then never would we witness any such actions from the non-Muslim world targeting our religion. Never would there be any newspaper that dares to publish caricatures of the Holy Prophet Muhammad (peace and blessings be upon him).

A few years ago when the cartoons depicting the Holy Prophet of Islam (peace and blessings be upon him) were first published in Denmark and then again in France, momentary hue-and-cry arose and announcements of boycotts were made from amongst Muslims and then, just as quickly, within a few months, everything died down and nothing further was said by the majority of Muslims.

The exception was the Ahmadiyya Muslim Community who stood alone by responding in the true Islamic fashion by demonstrating to the world the true and beautiful character of the Holy Prophet (peace and blessings be upon him). Upon this, many non-Muslims, academics, leaders and members of the general public praised our response. This was our reaction and will always be our response. We inform others that it is wholly unjust to label the misguided and evil actions of a few senseless people to be the true Islam.  Certainly, it does not behove the President or leader of any country that he should label the wrongful actions of an individual as part of ‘Islam’ and as a ‘crisis’ for Muslims and thereby incite the emotions of people against Islam.

Unquestionably, publishing such cartoons surely injures the sentiments of any true Muslim. If they continue to publish such hateful things and remain persistent in their actions, then they themselves are inciting others to commit unlawful and wrongful acts in the name of freedom of expression.

When this issue of caricatures first arose, I clarified the proper Islamic manner of responding in a series of sermons and, as I have said, that message had a very positive impact and we continue to act according to that peaceful manner of response.

Furthermore, when a certain anti-Islam Dutch politician spoke against Islam, I delivered an address in Holland, in which I warned him of the punishment of Allah the Almighty. Upon this, he falsely alleged that I had violently threatened him and called on the Dutch Government to ban me from entering the country and sought other action against me as well.[i]

Anyway, whilst remaining within the confines of the law, we always answer and respond to any allegations against Islam and the noble character of the Holy Prophet Muhammad (peace and blessings be upon him) to the very best of our abilities and will continue to do so. This is the solution that we present – that every step should be taken whilst staying within the prescribed limits of the law of the land.

Above all we should send salutations upon the Holy Prophet Muhammad (peace and blessings be upon him) and should pray for Islam. This is something I have drawn attention towards many times in my previous addresses that despite such hurtful statements regarding us made by non-Ahmadi Muslim leaders, we have always and shall continue to defend Islam, in light of the true teachings of Islam, God willing.

The killing of one, two, or four people is an expression of momentary rage and passion and can never be the solution. Of course, a violent reaction must always be condemned. If the Muslim Community desires a permanent solution then, as I said, the entire Muslim world must unite as one. Even on the current issue, the Turkish President and certain other countries reacted, but their reaction will not have any major effect in comparison to the potential impact that a collective reaction of all the Muslim countries together would have had. It is said that the French President may have softened his stance upon the reaction of Turkey but still he remained firm in his stance that what he had stated originally was correct. Certainly, if all Muslim countries had spoken with one voice, then the French President would have had no option but to apologise and retract his earlier statement entirely.

Anyway, here I wished to briefly address this issue and to make it unequivocally clear that Muslims should, at the very least, appear and speak as one in front of non-Muslim countries. See then how much of an impact and a positive change can then result!

We, Ahmadi Muslims, are fulfilling our mission and will continue to do so, if God wills, because this is the task and responsibility of those who follow the Messiah of Muhammad (peace be upon him) that they should propagate the beautiful teachings of Islam across the whole world. They must inform others of the pristine character of the Holy Prophet (peace and blessings be upon him) and not rest until they have brought the entire world under his banner (peace and blessings be upon him). Tell the world that its salvation lies in recognising the One God and eradicating all forms of injustice.

A few months ago, during the current COVID-19 pandemic, I once again wrote to a number of world leaders, in which I also wrote to the President of France. In that letter, I informed him of the words of warning stated by the Promised Messiah (peace be upon him) that natural disasters, calamities and afflictions are a punishment from Allah the Almighty as a result of injustices and wrongdoing. Thus, I wrote that world leaders must eradicate all forms of injustice, be just, and make statements and pronouncements that are truthful. We have fulfilled our responsibility and will continue to do so and now it is up to others whether they acknowledge it or not. Regardless, we must not forget the Muslim Ummah in our prayers – may Allah enable them to recognise the true servant of the Holy Prophet Muhammad (peace be upon him).

In addition, we should pray regarding the general condition of the world as it is rapidly advancing towards its own destruction. Let it not be that after we are finally free from this pandemic, another calamity in the form of world war befalls mankind. May Allah grant the world sense and understanding, and enable mankind to recognise and fulfil the rights of the One True God.”