The Ahmadiyya Muslim Community is pleased to announce that on 17 May 2019 the World Head of the Ahmadiyya Muslim Community, the Fifth Khalifa (Caliph), His Holiness, Hazrat Mirza Masroor Ahmad inaugurated the newly built and beautifully designed Mubarak Mosque (The Blessed Mosque) and administrative and residential complex, in Islamabad, Tilford, UK.

A new era in the history of the Ahmadiyya Muslim Community began when His Holiness delivered his weekly Friday Sermon from the Mubarak Mosque, which was broadcast live around the world on MTA International. 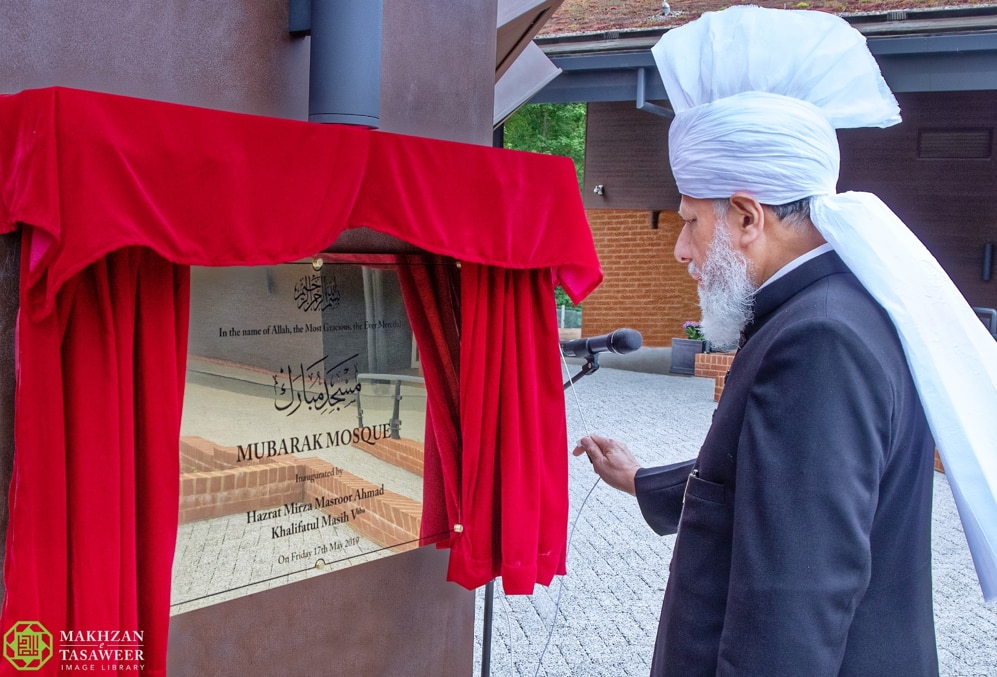 Before delivering the Friday Sermon, His Holiness unveiled a commemorative plaque outside the Mosque and explained that in keeping with a practice of the Second Khalifa of the Ahmadiyya Muslim Community, he would lead the congregants in a prostration of gratitude to Allah the Almighty for granting the Ahmadiyya Muslim Community the new headquarters and mosque. Those present were filled with emotion, whilst Ahmadi Muslims across the world partook in those special moments through MTA International. 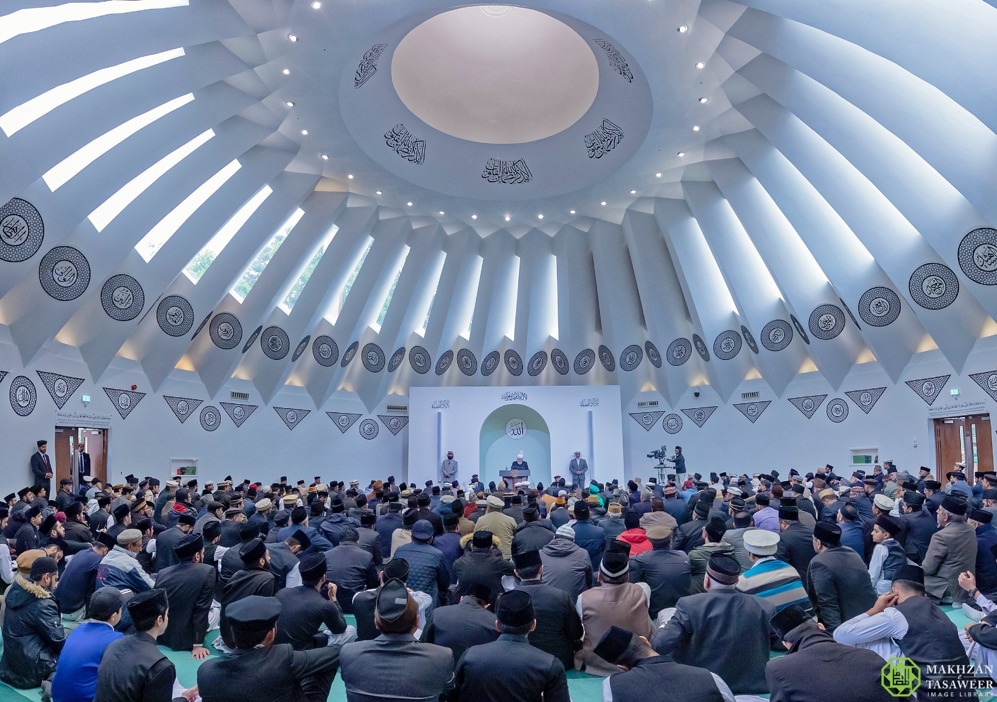 During his sermon, His Holiness spoke about the reasons for moving the centre of the Ahmadiyya Muslim Community to Islamabad from London and prayed that the new era ushered in great blessings and prosperity for the Ahmadiyya Muslim Community. His Holiness said that the Ahmadi Muslims who lived in the area or who visited must always seek to better themselves and to present the true peaceful teachings of Islam to the world through the new centre.

“May Allah the Almighty enable this mosque to be a reflection of the Mubarak Mosque in Qadian, may it attract the bounties of God, and may it be blessed in all ways. When there was discussion over the naming of this mosque, many other names came to mind, and some names were suggested. But then a revelation of the Promised Messiah (peace be upon him) suddenly came before me, which led me to have named it thus.”

Explaining the Arabic words of the revelation, His Holiness quoted the translation as given by the Promised Messiah (peace be upon him) himself.

“The translation of the revelation in the words of the Promised Messiah (peace be upon him) himself is, ‘This mosque is a source of blessings as well as a blessing itself, and every act of blessing will be performed within it’.” 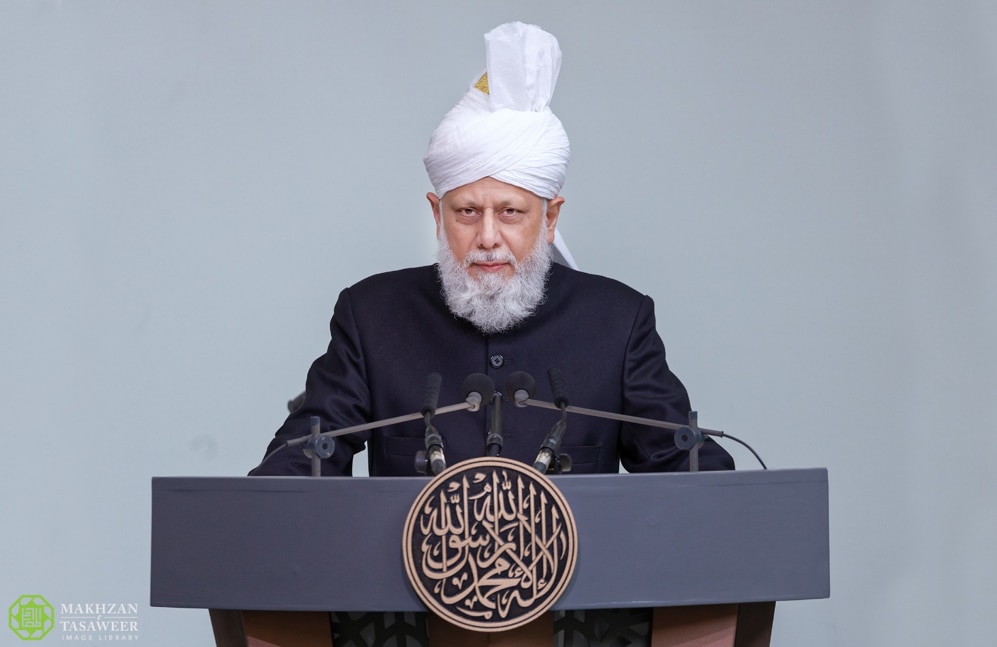 “May Allah enable the prayers of the Promised Messiah (peace be upon him) that he made in the Mubarak Mosque of Qadian, and his wish and ardent desire for the spread and victory of Islam across the world, reach this mosque as well. May this mosque and this centre forever be a source of spreading the Oneness of God and the message of Islam across United Kingdom, Europe and all of the countries of the world.”

Hazrat Mirza Masroor Ahmad reminded that despite the severe and relentless persecution faced by the Ahmadiyya Muslim Community in certain countries, the Community had continually prospered and all such progress was solely due to the bounties and grace of Allah the Almighty.

“Due to the law of the land, the Khilafat of the Ahmadiyya Community was forced to migrate from Rabwah, Pakistan (to London in 1984). However in order to cater for our needs, God opened the doors of progress for us to an even greater extent than before. May Allah the Almighty continue to facilitate our development and progress. May Allahthe Almighty, through this mosque and headquarters, show us many more and much greater advancements, bounties and blessings than what our enemies had desired to steal away from us.”

“The progress of the Ahmadiyya Community is through the blessings of Allah the Almighty. No worldly government can stop its advancement, nor is the Ahmadiyya Muslim Community in any need of the aid of any government for its success. As long as we abide by Allah the Almighty’s commandments, and endeavour to attain His pleasure, we will continue to prosper and be the recipients of these blessings.”

Hazrat Mirza Masroor Ahmad emphasised the need for Ahmadi Muslims to present the local residents near Islamabad with the noble teachings of Islam through their pious actions and to pay particular attention to fulfilling the rights of the local residents.

Despite the fact that Islamabad had been established for a long while, His Holiness said now the premises has taken on far greater significance with the construction of the new headquarters and thus Ahmadi Muslims must now be even more concerned than before for the comfort of their neighbours.

“You must now display your best examples even more so than before, and you must leave a good impression on the neighbours. If our neighbours are disturbed due to our noise, or the disorderliness of our traffic, or for any other reason, then we are giving a wrong message to the residents here. In this case, if we are not portraying the correct message of Islam, our gratitude towards Allah the Almighty will be meaningless verbal utterances. Gratitude to Allah the Almighty demands that our words and our actions, our teachings and our deeds should be one and the same, not that we should say one thing and yet act otherwise.”

Having stated the Mubarak Mosque to be the first mosque during his period of Khilafat to be opened during the month of Ramadan, His Holiness reminded the congregation that Ahmadi Muslims to make a particular effort in their worship and actions in order to fulfil the rights of the mosque, and to draw closer to God.

Speaking about the importance of Ramadan and the need to pray for the continued future progress of the Ahmadiyya Muslim Community, Hazrat Mirza Masroor Ahmad said:

“Whilst benefitting from this blessed month, a month in which prayers are readily accepted by God Almighty, we should pray for the progress of the Ahmadiyya Muslim Community and for the fulfilment of the purpose for which the new headquarters of the Ahmadiyya Muslim Community has been established in this part of the world. Pray fervently for this.”

“May the pathway open for us to return to Rabwah and to Qadian, which is the place of residence of the Promised Messiah (peace be upon him). May the routes to Mecca and Medina also be opened for us, for they are the cities of our master and leader, the Holy Prophet Muhammad (peace and blessings be upon him) and are the eternal centres of Islam.”

Outlining the features of the new Mosque, His Holiness said that it can accommodate up to 500 people and as well as a further multi-purpose hall which accommodates 1200 worshipers, there is outdoor space for worshippers and so the Mosque and its surrounding areas can accommodate over to 2000 people. 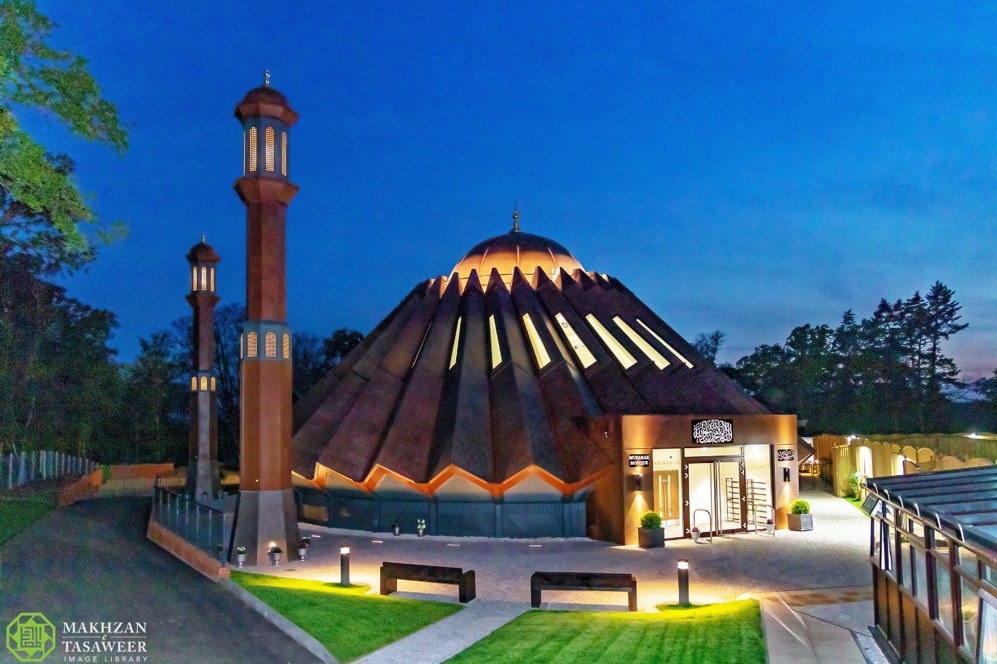 Furthermore, the office of Khalifatul Masih and certain central administrative offices have been built, as well as a housing development for office and staff members.