Around 160 guests attended the ceremony, including the Lord Mayor of Marburg, Dr. Thomas Spies and Soren Bartol, Member of the National Assembly. The keynote address was delivered by Hazrat Mirza Masroor Ahmad, who explained Islamic teachings in relation to integration and building a harmonious society. 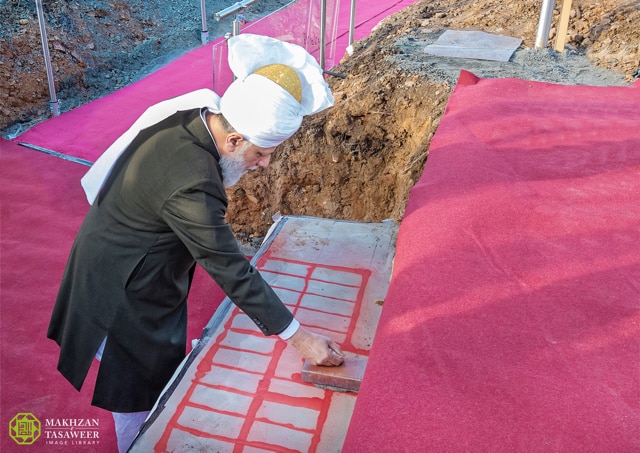 His Holiness began by thanking the guests and said their attendance at an Islamic religious function was “praiseworthy” and proved that they were “open minded and willing to listen to the beliefs of others”.

“Service to humanity is an obligation upon every human being. We must fulfil the needs of people regardless of their faith and we should seek to understand one another based upon the principles of humanity. According to the teachings of Islam, if a person fails to do this, then their worship is worthless.” 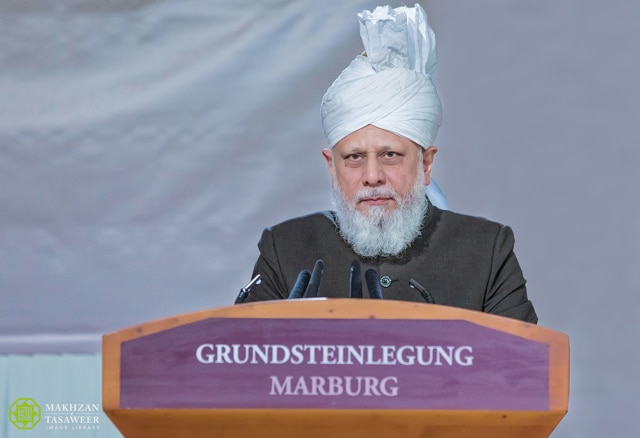 “The Holy Quran clearly states that the prayers of those people who come to mosques to worship, whilst at the same time cause harm to others and fail to partake in charitable works, and who do not spread peace and love, will not be accepted by God Almighty. In fact, their worship will not only be in vain but will also be considered a sin.” 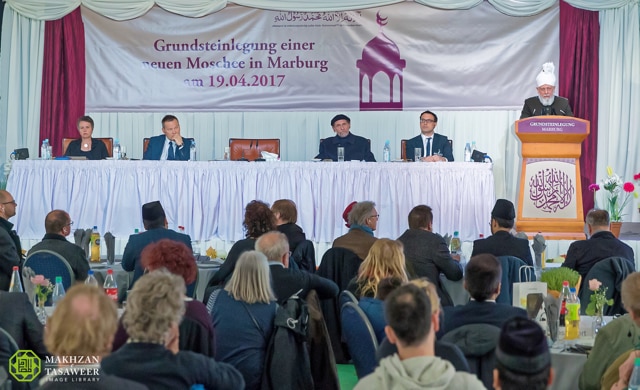 His Holiness said that amongst the various humanitarian projects of the Ahmadiyya Muslim Community, a key component were educational institutions which were providing education in some of the most deprived parts of the world.

At a time where it is often falsely alleged that Islam does not encourage girls to be educated, His Holiness said that Ahmadi Muslim girls and women were excelling their male counterparts in educational achievement.

His Holiness said that rather than restrict women, Islam considered the education of women to be of paramount importance to the well-being and progress of any nation.

“It is important for any person, male or female, to gain an education and to use it to serve their nation. However, it is of even more significance for a girl to be educated because in later life she will then be able to educate and raise her children in the best fashion. Indeed, the Founder of Islam, the Holy Prophet Muhammad (peace be upon him) said that paradise lies under the feet of a person’s mother. The reason for this is that a mother plays the vital role of educating her children and raising them as good citizens so that they can go on to be an asset to their nation. In this way, a mother paves a spiritual path for her children guiding them towards heaven.”

Explaining the concept of heaven and hell in Islam, His Holiness said there were two heavens – one in this life and one in the hereafter. In terms of the former, whenever and wherever a person manifested peace and morality it encouraged others towards goodness and resulted in the creation of a heaven on earth.

“On the one hand, there are some so-called Muslims who are killing innocent people by attacking clubs or carrying out suicide attacks in Muslim and non-Muslim countries. They seek to destroy the heaven on this earth and turn it into a hell. On the other hand, there are people who are spreading peace and harmony and in this way establishing a heaven on earth.” 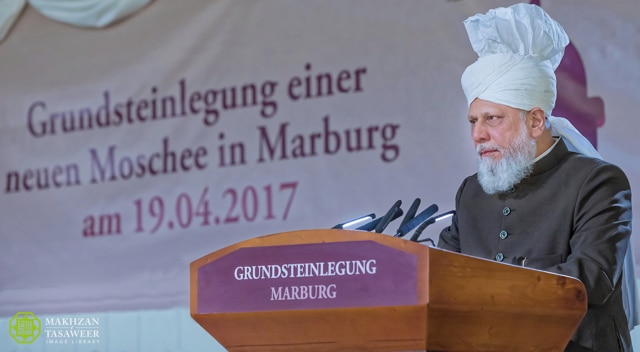 His Holiness also spoke about the rise of terrorism conducted in the name of Islam. He said that Islam’s teachings were entirely peaceful and those who committed acts of terror served only to defame Islam and had no knowledge of the religion.

“Some time ago, a foreign journalist met members of the terrorist group Daesh (ISIS) and asked where in the Holy Quran were their cruelties and injustices permitted and in reply the terrorists said that they had no knowledge of the Quran and they were merely following instructions of their superiors. Thus, let it be crystal clear that the killing of innocent people and causing terror has nothing to do with Islam.”

His Holiness also spoke about the comments of the previous speakers who noted that Ahmadi Muslims living in Germany were well-integrated into the local society.

“If a Muslim is not well-integrated he or she is not following the true teachings of Islam. Regardless of his or her country of origin, once an Ahmadi Muslim is living here, they must be completely loyal to Germany. This is their religious duty because the Holy Prophet Muhammad (peace be upon him) said that loving one’s country is part of a Muslim’s faith.”

“If a person is highly educated but later becomes a terrorist then his education has proven worthless. Similarly, if a person claims to accept a faith and yet adopts extremism then his faith has proven of no value to him. In reality, true faith requires a person to spread peace and love and so I hope and expect that once this Mosque is built, you will hear and observe the slogans of love from the Ahmadi Muslims more than ever before.”

Earlier, a welcome address was given by the National President of the Ahmadiyya Muslim Community Germany, Abdullah Wagishauser, followed by comments from guest speakers.

“I am very pleased that the Ahmadiyya Muslim Community is building a place of worship here in Marburg which will be a symbol of peace and freedom of religion.” 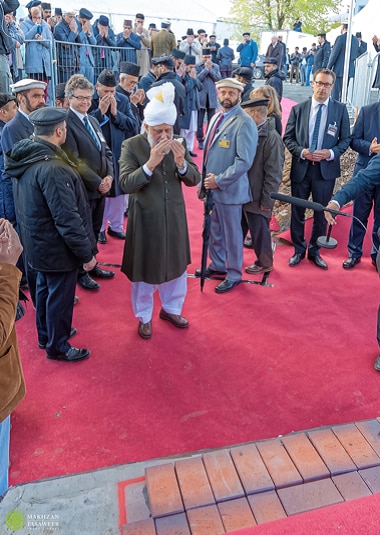 “Ahmadi Muslims always emphasise peaceful Islam and, in this era, where conflicts are arising, it is the duty of all of us to remove fears by displaying mutual respect and tolerance.”

Following the conclusion of his address, Hazrat Mirza Masroor Ahmad laid the foundation stone for the new Mosque.

The respected wife of His Holiness, Hazrat Amtul Sabooh Begum also laid a stone in the foundation of the Mosque and thereafter other dignitaries and a number of Central, National and Local Ahmadi Muslim officials also laid stones.

The formal session concluded with a silent prayer led by His Holiness, followed by dinner.