“I was first posted to Africa and from that moment onwards Allah the Almighty took hold of my finger and took me forward from place to place and I had no control in this.” – Hazrat Mirza Masroor Ahmad

It was the first time His Holiness presided a class with Jamia Ahmadiyya Internationaland in this way, the trainee Missionaries, from a range of countries including Ghana, Nigeria, Senegal, Tanzania, Jordan and Kazakhstan, were able to collectively meet with and seek the guidance and prayers of their spiritual and religious leader.

The event started with the recitation and translation of verses of the Holy Quran, followed by a poem and a narration of the writings of the Promised Messiah (peace be upon him).

During the meeting, His Holiness was asked to share a special memory from his time living in Ghana during the 1970s and 1980s.

“During my time in Ghana, the Third Khalifa, Hazrat Mirza Nasir Ahmad (rh) visited the country and I recall that on the very first day of the tour, people had gathered in Accra to greet him and so the Third Khalifa came out to meet them and he delivered a short address. Whilst doing so, it started to rain heavily to the extent that, despite having an umbrella above him, the clothes of the Third Khalifa became soaked. Despite the heavy rain, the Ghanaian men, women and children did not move an inch and continued to listen to his address with full attention. The Third Khalifa was very much impressed by their high levels of patience and tolerance and later remarked how they had listened to the words of the Khalifatul Masih attentively throughout the rainstorm and did not move from their places.”

“In a similar vein, I remember when I visited Tanzania in 2005 there were several rainstorms occurring during those days. Thus, when I addressed the ladies during the Jalsa Salana, suddenly the heavens opened from above. The covering placed above them could not withstand it and so suddenly a great deal of rainwater came gushing down to where the ladies were seated and yet not one moved from their place. Rather, they maintained their position and continued to listen to my address with patience and concentration.” 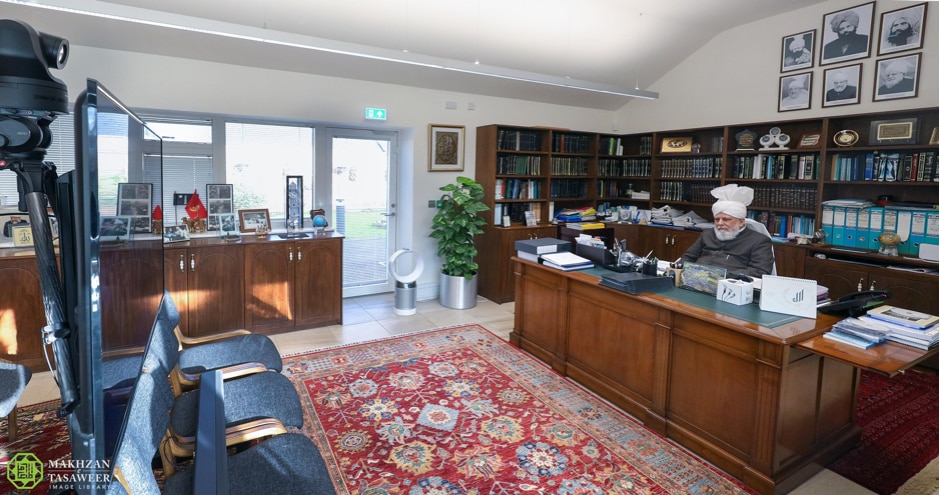 His Holiness stated that patience and discipline in the face of adversity were the hallmarks of successful nations and stated that African people and nations were an example for others in this regard.

“Generally speaking, African people have a high threshold of patience and tolerance and they are also naturally disciplined people. It is important that these qualities remain and are built upon. Hence, all of you,  who are becoming Missionaries, should ensure that apart from teaching the matters of faith to the coming generations, you should also teach them that Islam places importance on having discipline and, certainly, those nations who bear this quality are those who progress and flourish. As I have said, naturally Africans are disciplined people and it just requires for this quality to be harnessed and organised in a productive way. If your nations are able to achieve this then Africa, God Willing, will come to lead the world and for this you, as Missionaries, must play your role.”

His Holiness was asked how best to convince atheists about the existence of God.

“The strongest proof of the existence of God for a person of faith is their own example and experience. If an atheist denies God, we must inform them that we have seen and witnessed in our lives the existence of God. Each of us have experiences of when we have prayed to Allah the Almighty and He has accepted our prayers. Thus, when any of you encounter atheists you should let them know that you have seen God Almighty and felt Him and so it is impossible that you could ever deny Him. Tell them that if they sincerely strive with an open mind then they too will find God.”

“Many people who deny God are very stubborn in their beliefs and do not even want to hear or consider any proofs or evidence to the contrary. Some years ago, a well-known atheist wrote a famous book denying the existence of God and so, in response, I sent him the 5-volume English commentary of the Holy Quran and the book of the Promised Messiah (peace be upon him) ‘The Philosophy of the Teachings of Islam’ and I requested him to read them so he could understand our beliefs and proofs regarding the existence of God. However, he responded by saying that he had no interest in reading them. Hence, he wanted us to read his book but was unwilling to read ours. Nonetheless, there are other atheists who are more open minded and willing to listen to others and so you should get to know such people personally and strive to bring them closer to God.”

“In the past, many people have come to meet me and later they admitted that though they did not believe in God but if they were ever to change their beliefs it would be because of the Khalifa (Caliph), as he had explained the existence of God in the most logical way. Also, you should remember that in order to soften and turn the hearts of others you must use the limitless power of prayer and set an excellent personal example from which others can learn and benefit.”

As the meeting drew to a close, His Holiness was asked what field or career he had wished to pursue whilst he himself was a student.

“What I wished to become I could not and I ended up in such a place that I had no personal desire for.” 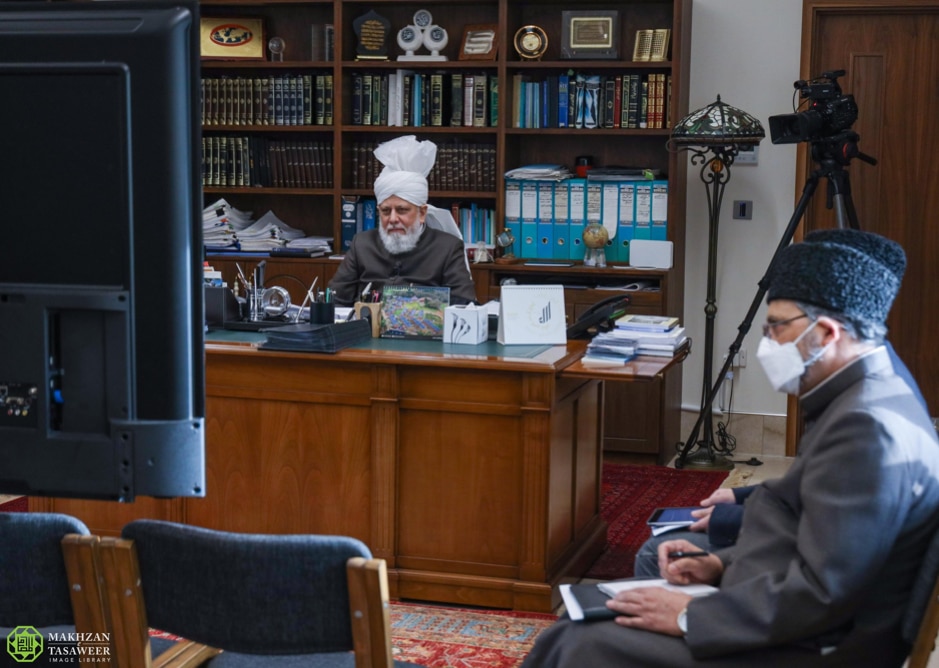 “At first, I was interested in science and thought that I may pursue medicine. Then I did agricultural economics  and I prayed and pledged in my heart that if I get good marks in the MSc examinations I would devote my life for the service of the Ahmadiyya Muslim Community. Thereupon, Allah enabled me to get good grades and to enter the First Division without any real effort on my part and so then I fulfilled my pledge to serve as a life devotee.”

“I was first posted to Africa and from that moment onwards Allah the Almighty took hold of my finger and took me forward from place to place and I had no control in this. Thus, we must always seek and endeavour to tightly grasp Allah’s Hand and to seek His Help in all matters. If we do so with sincerity, then Allah guides and takes care of a person Himself. Especially, our Missionaries must take hold of the hand of Allah and to beseech Him that He may take us wherever He desires and deems better for us and that he inculcates within us those qualities that He desires. This alone is the way of the blessed.”