Hazrat Mirza Masroor Ahmad addresses over 5,600 Muslim youths from across the UK. 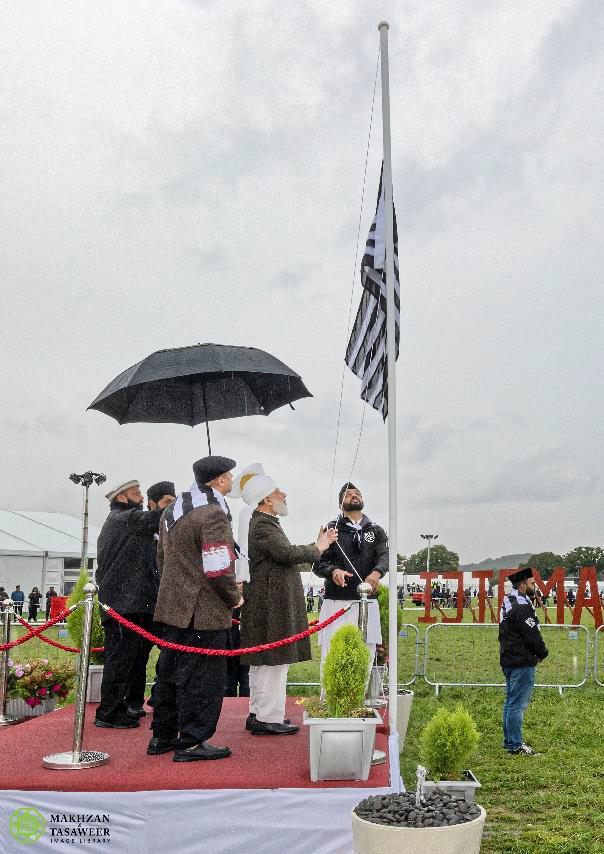 The objectives of the Ijtema, held for the second time at Country Market, Kingsley, were to educate the Muslim youths of the true peaceful teachings of Islam and to inspire them towards serving both their faith and nation to the best of their abilities. 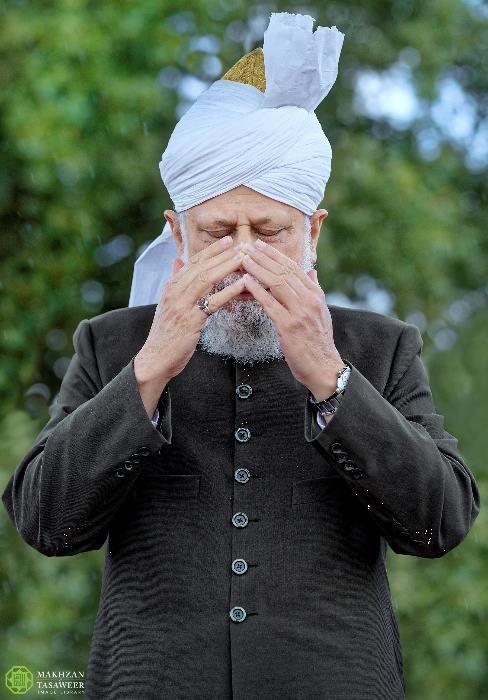 His Holiness directed that having accepted the Founder of the Ahmadiyya Muslim Community as the Promised Messiah it was incumbent upon Ahmadi Muslims to act upon Islam’s true teachings.

“If we are negligent in our religious duties, we will have no right to assert that our acceptance of the Promised Messiah (peace be upon him) has brought about a spiritual revolution within us or has enabled us to follow the true teachings of Islam. Rather, our acceptance of him will merely be a hollow and meaningless claim uttered by our tongues.” 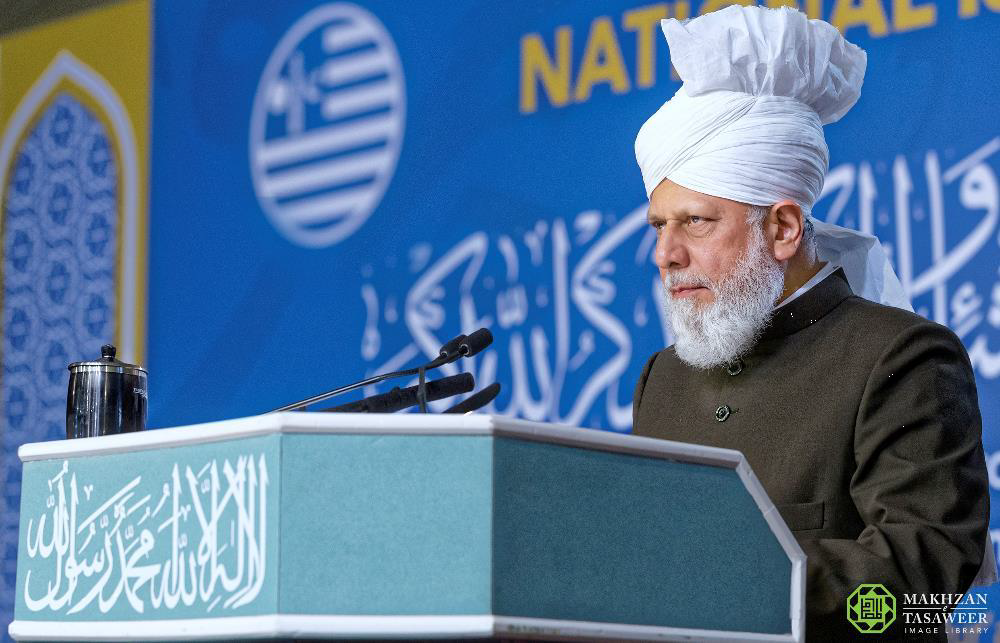 To highlight the importance of offering the five daily prayers, His Holiness quoted chapter 2 verse 239 of the Holy Quran which states:

“Watch over Prayers, and the middle Prayer, and stand before Allah submissively.”

“In today’s world, people of all ages, including many youngsters, stay up late studying, or wasting time in immoral or wasteful things such as aimlessly surfing the internet, watching films or TV, scrolling endlessly on their phones or tablets or sending messages late into the night. As a result, they fail to wake up for Fajr and so, due to their routine, Fajr actually becomes the middle prayer for them. Thus, the middle prayer is whichever prayer is at risk of being forsaken as a result of worldly or material pursuits.”

His Holiness also referred to a saying of the Holy Prophet Muhammad (peace and blessings be upon him) that the reward for the prayers offered in congregation is at least twenty-seven times greater compared to offering the prayer alone. 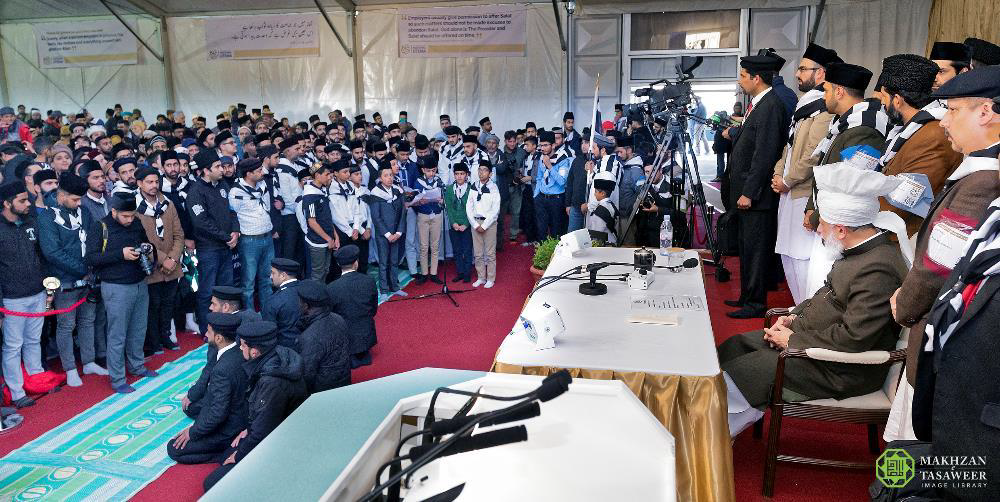 “Such narrations make us realise how gracious, generous, merciful and benevolent Allah the Almighty is.  Whilst, the punishment for a sin is equivalent and proportionate to the offence committed, when it comes to virtue and good deeds, Allah the Almighty often rewards us many times over. Hence, it is your duty to take benefit of the great mercy of our Gracious God by joining together in our Mosques for congregational prayers and bowing down before Him beseeching His forgiveness for your sins and weaknesses.”

“Do not fall into the trap of thinking that ‘Salat’ is a theme for just one year, rather it should remain the theme underpinning your entire lives. Whatever age you are, and whether you live into your seventies, eighties or even beyond, Salat is the one thing that a true Muslim can never do without. Without it, nothing of value can ever be achieved.”

His Holiness commended those Ahmadi Muslim youths who had improved their standards of worship of Allah over the past year.

He said they should continue to seek spiritual progress and development, whilst those who had not made any effort to raise their standards of worship should now seek to improve.

“If there are some who have not made a resolute effort to improve their standards of worship over the past year they should not waste another day. Now is the time to make a firm and conscious decision to improve. Now is the time to start climbing that spiritual ladder that takes us towards our Creator.”

“If you ignore your duty to worship Allah and focus upon material interests, you may be successful in attaining worldly pleasures, but remember that a true Muslim focuses upon the permanence of the next life and not just the fleeting pleasures of this temporary worldly existence. So, the only solution and the only way is prayer.”

“If we are regular in prayer and if we pray with sincerity then our lives will be worthy of success. According to the Promise of Allah the Almighty, we will be freed from the shackles of wrongdoing, evil and immoral behaviour. We will be those who fulfil both the rights of our Creator and of one another. We will be those who spread love, tolerance and compassion amongst society. We will be true Muslims.”

His Holiness quoted chapter 29 verse 46 of the Holy Quran which outlines the benefits of offering Salat and states:

“Surely, prayer restrains one from indecency and manifest evil and remembrance of Allah is indeed the greatest virtue.”

“We are living in an era, where at every turn, we are exposed to indecency, immorality and harmful vices that seek to lure mankind away from virtue and drag them towards sin. More than ever before, it is necessary for a believer to protect himself from the countless evils and immoralities that pervade society. For this, we must use that method which Allah the Almighty has Himself given us, which is to bow down before Him five times each day. This is the path to salvation and those who walk upon it are not only saved from Allah’s Wrath but are the recipients of His love, His grace and His great rewards.”

His Holiness quoted a number of sayings of the Holy Prophet Muhammad (peace and blessings be upon him) about the importance of the five daily prayers.

In response, the Holy Prophet Muhammad (peace and blessings be upon him) replied:

“You must worship Allah according to the way He has taught, you must not associate any partners with Him, you must offer Salat, pay Zakat (charity) and treat your kindred lovingly. This is the means to entering heaven.”

His Holiness also quoted a number of sayings of the Promised Messiah (peace be upon him) highlighting the importance of prayer, including an excerpt explaining the philosophy underpinning the different physical postures adopted during the five daily prayers.

Hazrat Mirza Ghulam Ahmad, the Promised Messiah (peace be upon him) stated:

“You must perform Salat in the best possible manner. When you are in the standing posture, your whole appearance must reflect the fact that you are standing before God in complete humility.”

The Promised Messiah (peace be upon him) further stated:

“When you bow before Him in Salat, it must be a reflection of the submission of your heart. When you fall prostrate, your manner must be that of a person who is inspired by the fear of God. And pray a lot for your spiritual, as well as material success.”

Hazrat Mirza Masroor Ahmad said that the Promised Messiah (peace be upon him) was sent by God Almighty to establish a bond between God and mankind and to urge human beings to fulfil the rights of one another by living together with a spirit of peace and tolerance.

“If we are able to pick up the spiritual lantern that the Promised Messiah (peace be upon him) has placed before us by fulfilling these twin objectives we will undoubtedly gain the attention of the world and people will be increasingly inclined towards us. Only then will we be fulfilling our duties to spread the true message of Islam and bring others towards it.”

His Holiness said that spreading the true teachings of Islam was the great task which Ahmadi Muslim youths “should accept wholeheartedly”.

“Ahmadi Muslim youths should be the ones who work day and night to refute those who defame Islam’s name or who make false allegations against it. You should be the ones who are at the forefront of spreading the enlightened teachings of Islam far and wide so that we come to see that blessed day where the world unites under the peaceful banner of the Holy Prophet Muhammad (peace be upon him).”

“You should be the ones who fulfil your pledge of being ever ready to sacrifice everything for the sake of your faith. Only then will you be playing your role in bringing about a spiritual revolution in the world by bringing mankind towards the worship of Allah the Almighty. Only then will we see the dark clouds of today begin to part and be replaced by an emergent blue sky. For this great task, you must be ever ready and ever willing. Until your last breath, you should consider this the primary task and objective of your lives.” 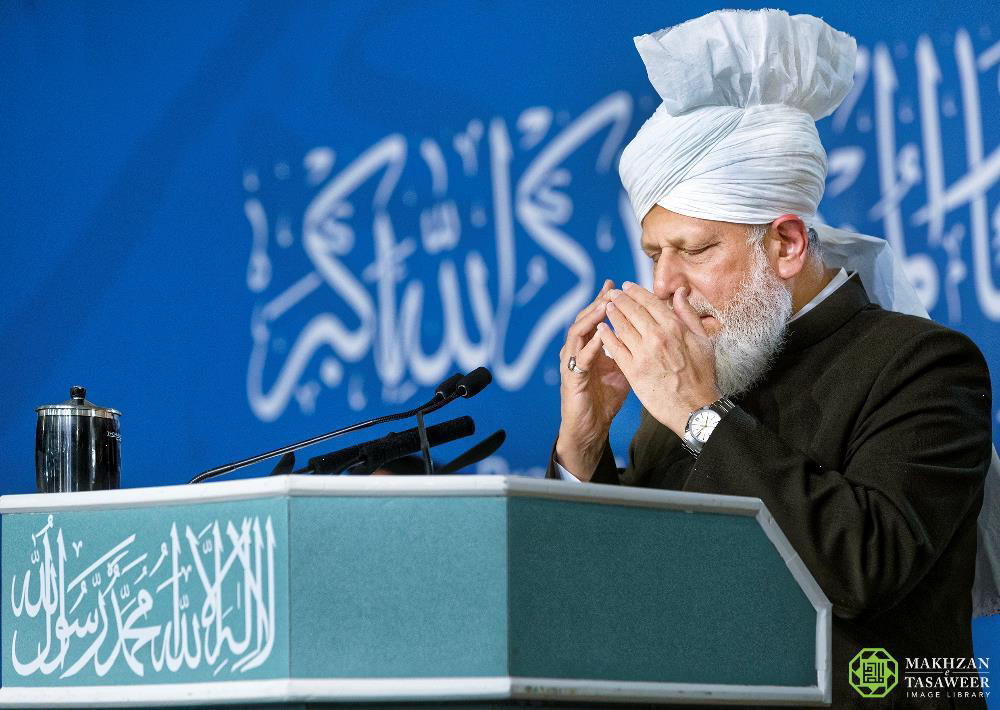 “May our prayers be filled with emotion, sincerity and deep anguish seeking the love and nearness of Allah the Almighty. May our hearts melt before our Lord when we bow down before Him. May we pray with such intense humility that every fibre of our being lies in a state of submission before Allah the Almighty. Such heartfelt prayers will surely be accepted and take us towards our true purpose and objective, which is to gain the love of Allah the Almighty.”

During the Ijtema, Ahmadi Muslim youths from over 100 local communities from across the United Kingdom (Qiadats) competed in various academic and sports competitions, including a special Kabaddiexhibition match.

The Muslim youths were also able to visit the ‘The Hub’ where they had the opportunity to ask questions in a confidential environment about religion or social issues.