8 October 2018
His Holiness, Hazrat Mirza Masroor Ahmad addresses over 5,500 women from across the UK

Held at Country Market in Kingsley, Hampshire, this two-day event served to inspire the women of the community to deepen their spirit of unity as Muslim women living in the United Kingdom and to join together in various programmes designed to stimulate spiritual, moral and educational training.

In his address, His Holiness reminded Lajna Imaillah of the immense value of remaining firm in their faith and in being ever ready to offer any sacrifice for the sake of their religion and beliefs.

“Be amongst those women and girls who light up the world through their sincerity and morality and through their readiness to give up everything for the sake of their religion and nation.”

His Holiness urged Ahmadi Muslim women to live by the teachings of Islam and to inculcate a spirit of sacrifice for the sake of their religion and beliefs.

“A spirit of sacrifice will only develop inside you when you attain spirituality through a personal relationship with Allah the Almighty and for this, you must earnestly bow down before Him with absolute humility. A willingness to make sacrifices for your faith is only possible if you are constantly trying to morally improve and increase in righteousness.”

His Holiness proceeded to present practical, real life examples of Ahmadi Muslim women who had made immense sacrifices for the sake of their faith and remained steadfast upon their beliefs.

“Many Ahmadi Muslim women have had to endure horrific cruelties and hardships and some have even given their lives for the sake of the faith. With the Grace of Allah, those noble women never shirked from the challenges they faced. Rather, their response to such hatred and injustice was to increase in their devotion to Ahmadiyyat and be more determined to live their lives as true servants of Islam.”

His Holiness narrated the incident of a woman in Canada whose husband forcibly threw her and her three children out of their home for accepting Ahmadiyyat. Despite previously living in relative affluence, after being removed from the family home she had to work as a domestic cleaner to make ends meet but never faltered in her resolve or faith.

Hazrat Mirza Masroor Ahmad also described how Ahmadi Muslim women have given their lives for the sake of their faith and have been martyred. He mentioned a young Ahmadi Muslim mother of three living in Pakistan who, in 2011, was murdered in her own home by anti-Ahmadi opponents for the sole reason that she was Ahmadi Muslim.

Praising the sacrifices these brave women have made, Hazrat Mirza Masroor Ahmad said:

“As long as this incredible spirit of sacrifice remains within our Community, rest assured that no one can ever weaken or harm the Ahmadiyya Muslim Community… The opponents of Ahmadiyyat will continue to make threats against us, but their attempts will never reap any fruit because the faith that exists amongst Ahmadi Muslim men, women and children ensures that the Community of the Promised Messiah (peace be upon him) will continue to flourish and prosper no matter what.”

His Holiness also cautioned Ahmadi Muslims to ensure that their standards of faith never slipped and that they did not fall behind in practicing their religion.

“Always seek to increase your faith and to travel on those blessed paths that Allah the Almighty has Himself commanded us to walk upon. Always strive to fulfil the objectives for which the Promised Messiah (peace be upon him) was sent. Tread upon those golden walkways that lead to directly to Him. Pay heed to the words and instructions of the Promised Messiah (peace be upon him), who has taught us how to attain the love of our Creator.”

“Always pray that you remain steadfast in your faith. Rest assured, if you remain firmly attached to Ahmadiyyat, Allah the Almighty will never forsake you. Instead, He will grant you the status of a true believer and count you amongst the truthful.” 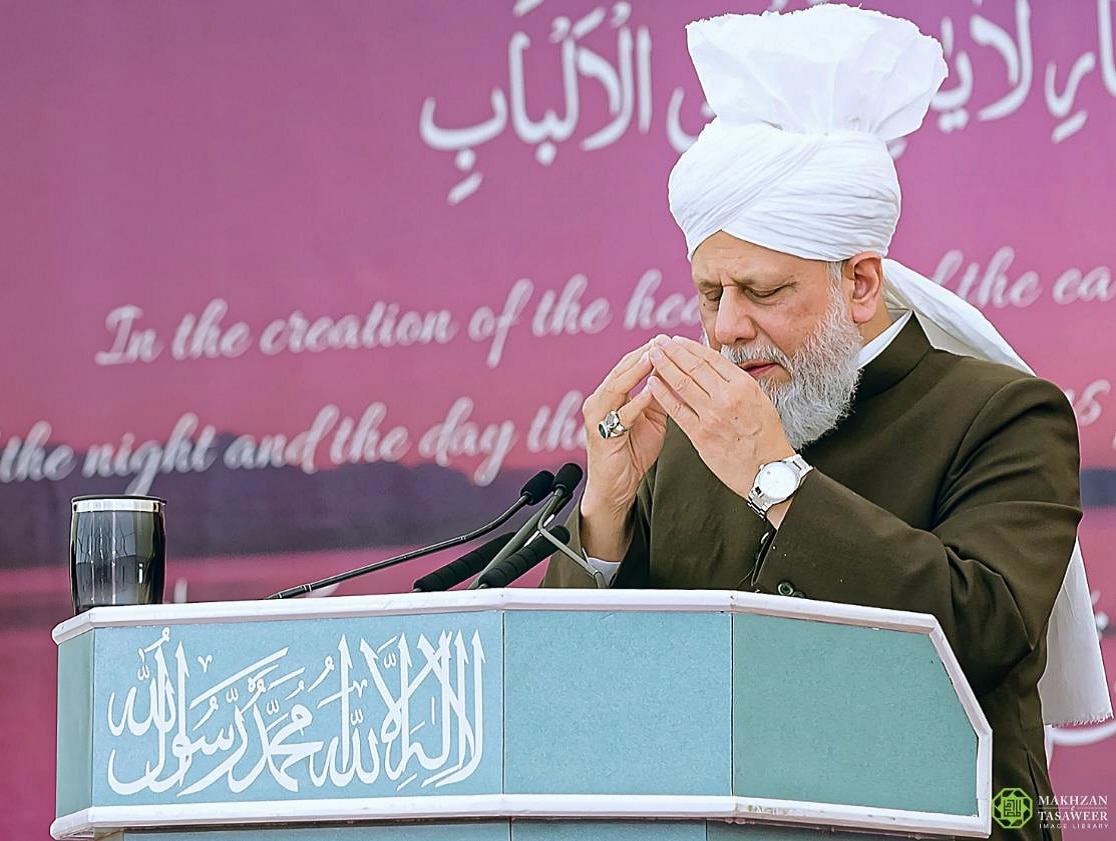 His Holiness advised Ahmadi Muslims to instil within their children the true and peaceful values of Islam so that they matured into ‘model citizens’ who were ever-ready to give whatever sacrifice was required for the sake of their faith and nation.

“As long as Allah the Almighty continues to bless the Ahmadiyya Muslim Community with noble women and devoted mothers, who fulfil their own pledges and who train their children to be pious ambassadors and servants of Ahmadiyyat, any and every attempt to harm or destroy our Community will be doomed to fail.”

“Certainly, all Ahmadi Muslims who remain firm in their faith will be a part of the fulfilment of the grand Promise of God, whilst those who are not truthful will separate from God’s pious community, as the Promised Messiah (as) foretold. With all my heart, I pray that may Allah the Almighty enable every person who accepts Ahmadiyyat to remain a sincere member of the Jamaat and to stay amongst those counted as truthful believers.”

His Holiness concluded the Ijtema with a silent prayer.

His Holiness also visited an educational exhibition set up by the ladies’ branch of the Ahmadiyya Muslim Research Association (AMRA) at the Ijtema which was based around ‘Science in the Holy Quran’. 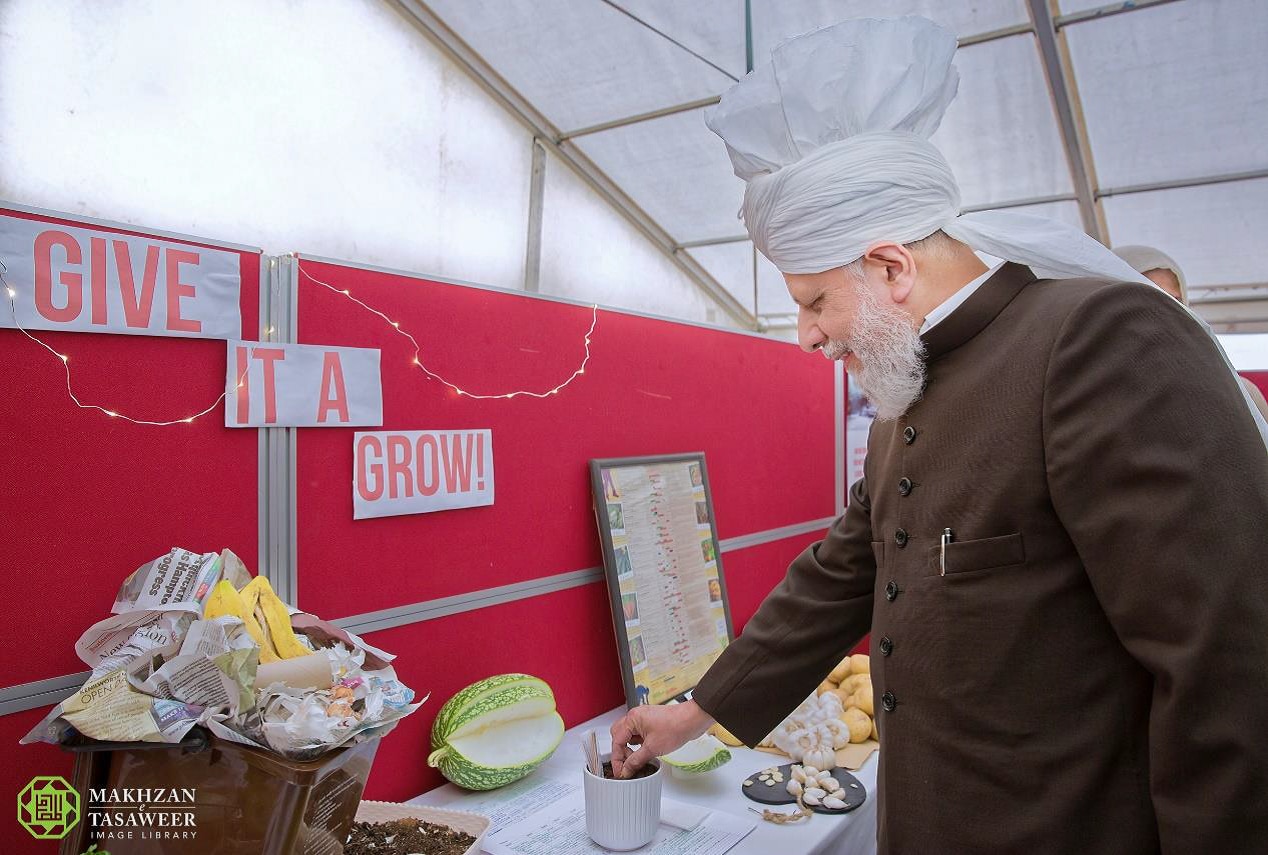 His Holiness visited the nature zone, where he planted a courgette seed and viewed a demonstration of a ‘smoothie drink’ being made by riding a bike. His Holiness also observed a water filtration system that was part of the exhibition.