“Rather than erecting walls that keep us apart, we should build bridges that bring us closer together” – Hazrat Mirza Masroor Ahmad

The event was held at the Baitul Futuh Mosque in London with an audience of more than 1,000 people, from 30 countries, including over 600 non-Ahmadi guests comprising Government Ministers, Ambassadors of State, Members of both Houses of Parliament and various other dignitaries and guests.

During the event, His Holiness presented Ms. Setsuko Thurlow, a Hiroshima bomb survivor and peace activist, with the Ahmadiyya Muslim Prize for the Advancement of Peace in recognition of her outstanding efforts in campaigning for nuclear disarmament.

During his address, His Holiness condemned last week’s terrorist attack in London as a “barbaric atrocity” and labelled all forms of extremism and terrorism as a complete violation of Islamic teachings.

Further, His Holiness expressed his grief at continued warfare in the Muslim world, as well as voicing his fears about increasing tensions in the rest of the world. His Holiness also called on world powers to curb the sale of weapons and arms.

“First of all, I would like to extend my deepest condolences to all those affected by Wednesday’s terror attack at Westminster. Our thoughts and prayers are with the people of London at this tragic time. On behalf of the Ahmadiyya Muslim Community, I wish to make it categorically clear that we condemn all such acts of terrorism and we offer our heartfelt sympathies to the victims of this barbaric atrocity.” 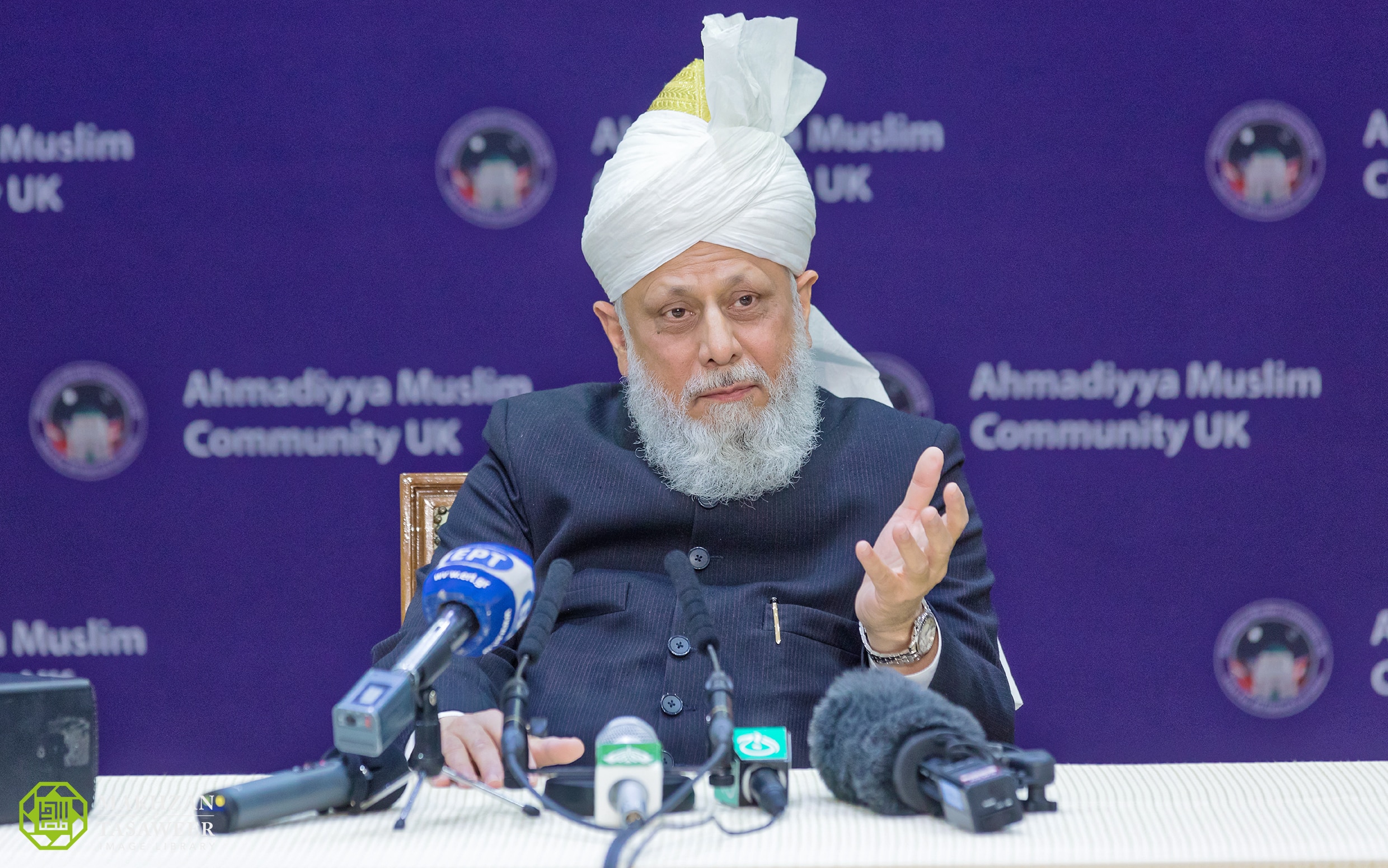 His Holiness said it was a cause of great regret that extremist Muslim groups had turned certain Mosques and Madrassas into “centres of extremism”, which had fuelled fear and misconceptions about Islam amongst non-Muslims. In stark contrast, Holiness said that an inherent part of the worship of God was to serve mankind and to live peacefully with the people of all faiths and beliefs.

Based on these Islamic teachings, the Ahmadiyya Muslim Community had established humanitarian projects in various parts of the world, each serving mankind and bringing relief to those in need. 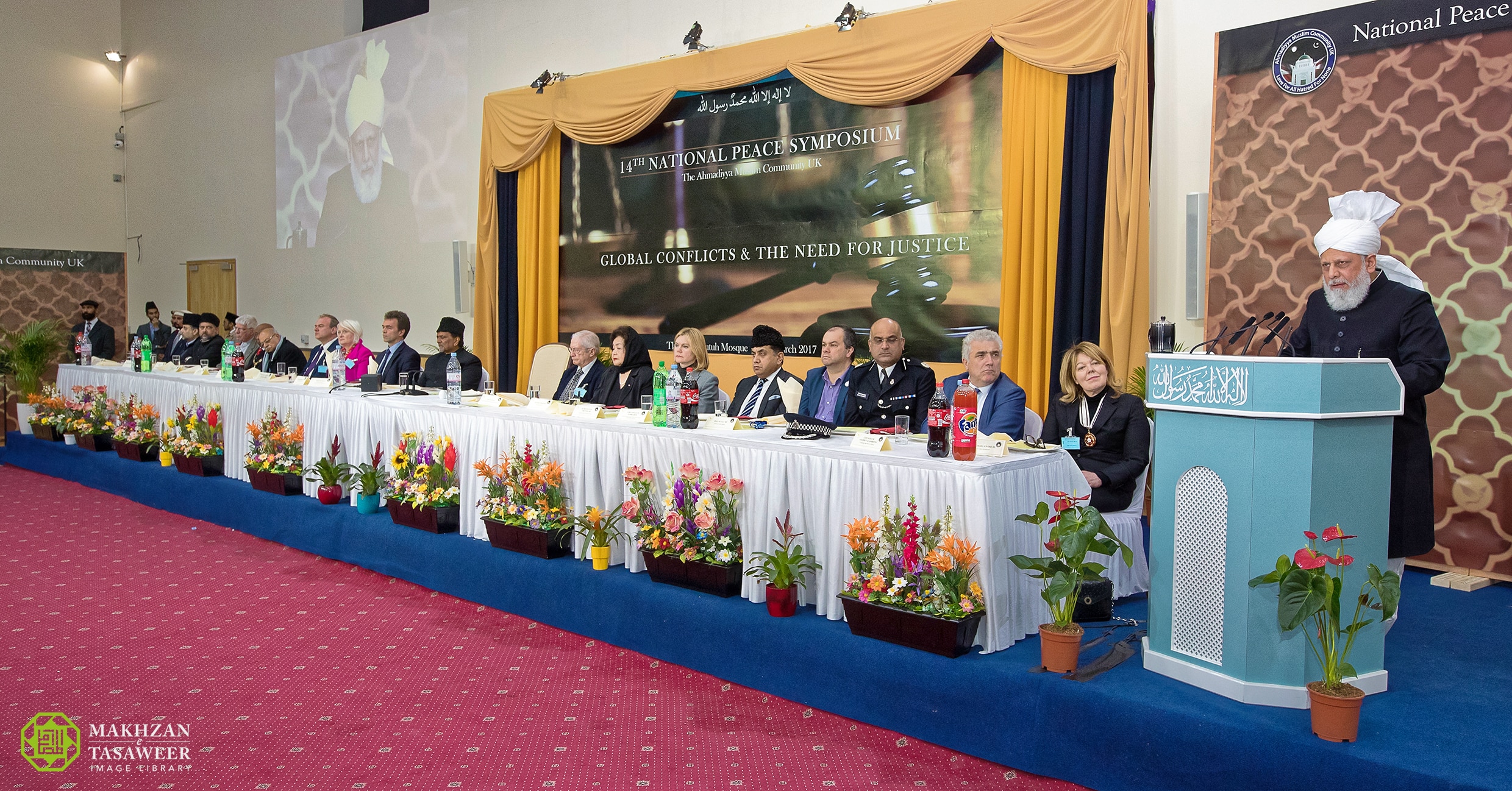 “In this way, rather than becoming frustrated and prone to extremism, they will grow to be responsible and faithful citizens of their nations. Where they will personally develop, they will also help their nations progress and inspire others to follow in their footsteps.” 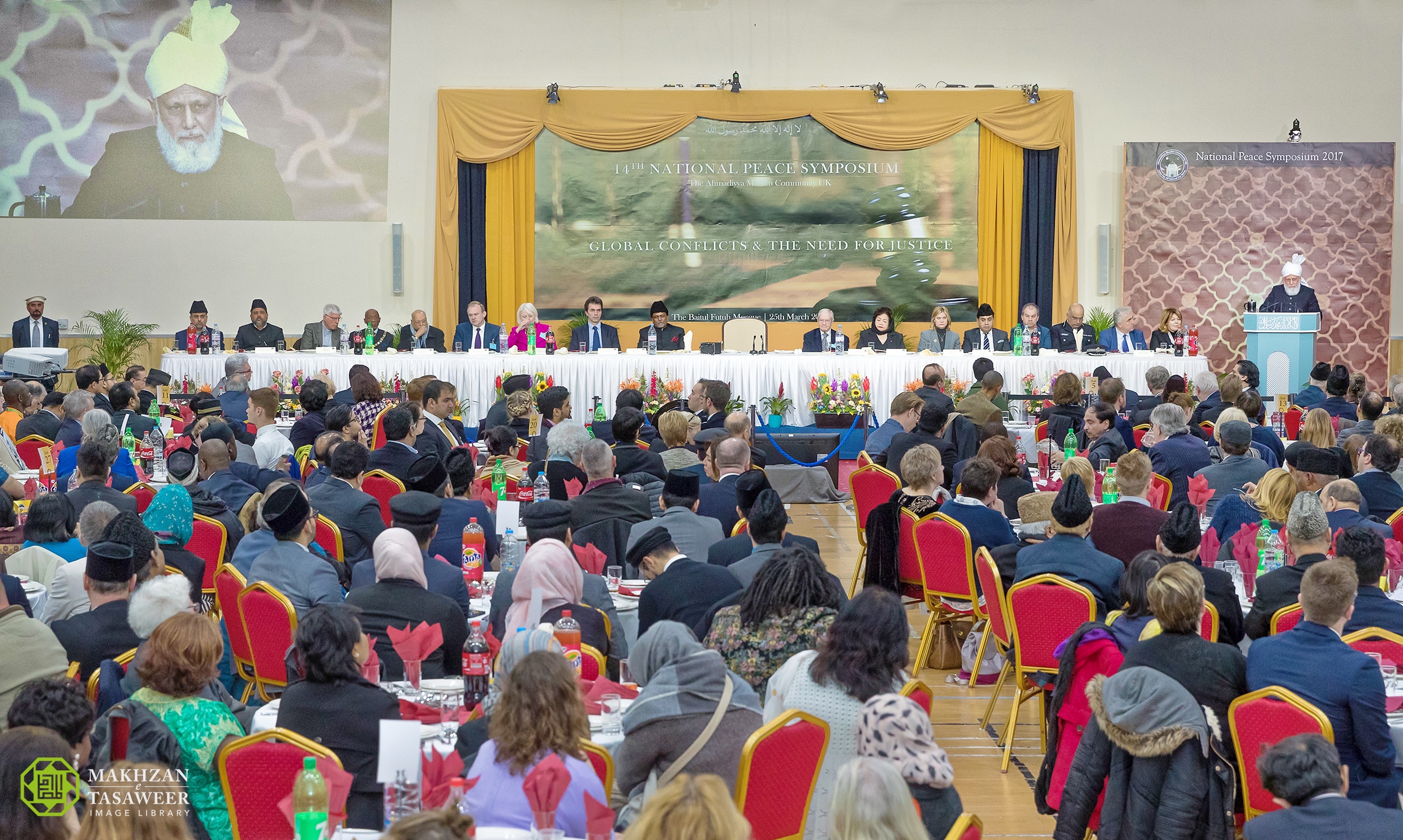 His Holiness said that despite the teachings of Islam being categorical in rejecting indiscriminate attacks or killings, many people associated Islam with violence or warfare.

“No matter what terrorists may claim, under no circumstances are indiscriminate attacks or killings ever justified. Islam has enshrined the sanctity of human life in chapter 5, verse 33 of the Holy Quran, which states: ‘Whosoever killed a person – it shall be as if he killed all mankind; and whoso gave life to one, it shall be as if he had given life to all mankind’.”

“Islam is that religion which has forever enshrined the universal principles of freedom of religion, freedom of conscience and freedom of belief. Therefore, if today there are so-called Muslim groups or sects that are killing people, it can only be condemned in the strongest possible terms. Their barbaric acts are a complete violation of everything that Islam stands for.” 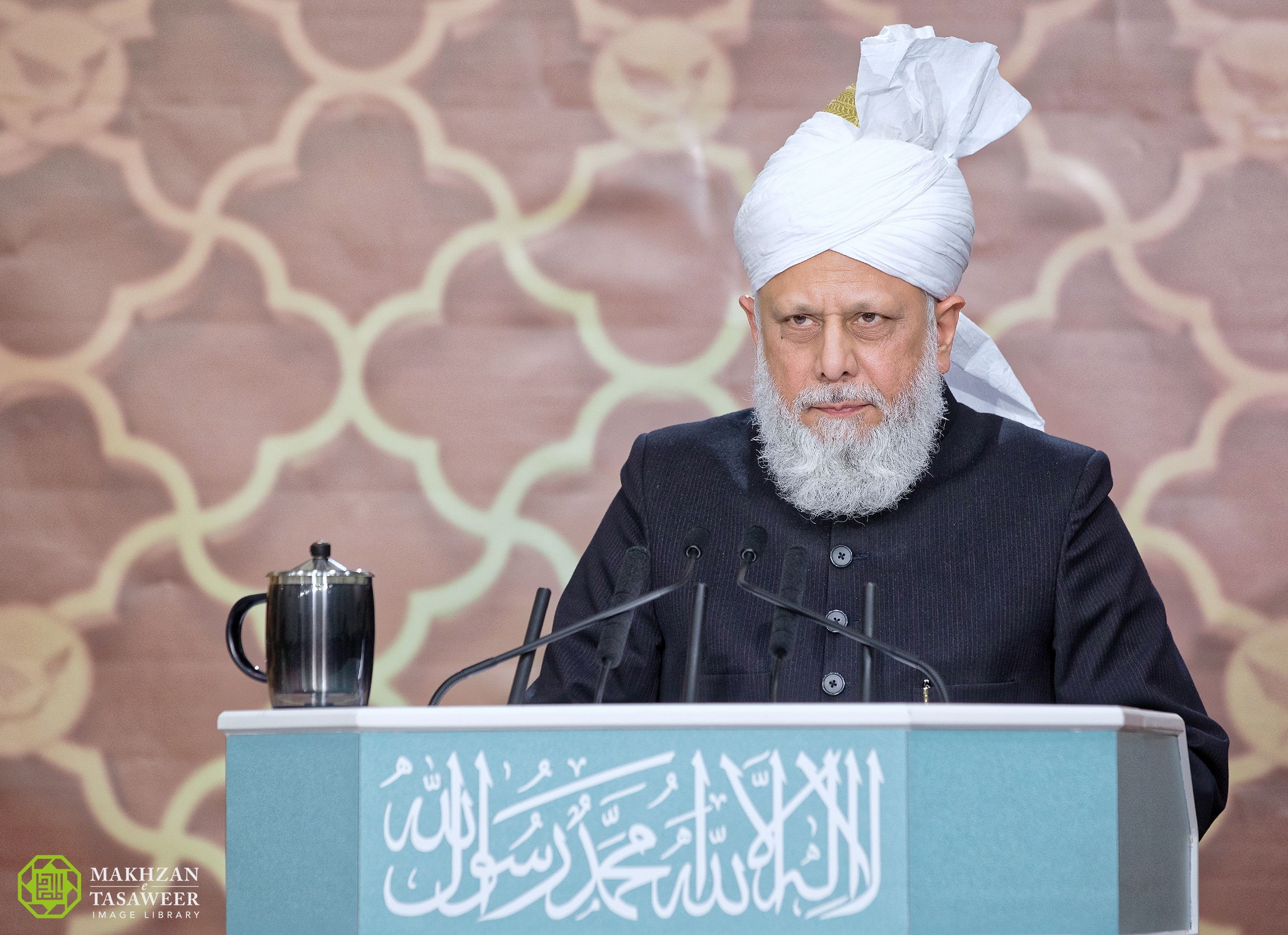 His Holiness also spoke about certain individuals or groups from amongst non-Muslims who are“fanning the flames of division and hostility” and cited a Foreign Policy article that described Islamophobia as an ‘industry’ in itself. His Holiness called on world leaders to speak with wisdom and integrity at all times.

“Regrettably, we often hear politicians and leaders making needlessly inflammatory statements that are beholden not to the truth, but to their own political interests.”

His Holiness rejected the allegation raised by certain prominent figures that the Holy Prophet Muhammad (peace be upon him) massacred those who did not accept Islam. He said that the Founder of Islam (peace be upon him) only fought as a last resort in order to defend the institution of religion and to establish the principle of universal freedom of belief.

“The allegation that the Holy Prophet (peace be upon him) was a belligerent leader or a warmonger is an injustice and cruelty of the very highest order and such false claims can only grieve the hearts of the millions of peaceful Muslims worldwide. History bears witness to the fact that with every fibre of his being, the Prophet of Islam (peace be upon him) sought peace and reconciliation.”

His Holiness also said there are some journalists and prominent personalities who are “swimming against the tide of falsehood” by writing about Islam with justice and integrity, and quoted Ruth Cranston, a prominent 20th century author, who wrote in the 1949 book, World Faith: “Muhammad never instigated fighting and bloodshed. Every battle he fought was in rebuttal. He fought defensively in order to survive.”

His Holiness also praised the response of Prime Minister, Theresa May following the Westminster attack.

“I would like to highly commend our Honourable Prime Minister for quoting some verses from the Holy Quran and condemning certain accusations that were levelled against Islamic teachings.”

Speaking about one of the causes of extremism, Hazrat Mirza Masroor Ahmad said that a number of reports suggested that some Muslim youths had been radicalised as they felt their religious beliefs had been mocked and ridiculed in the Western world.

“In no way does this justify or excuse them and they remain culpable and responsible for their actions. Yet common sense dictates that we should not pour petrol on an open flame. Rather, we should seek mutual understanding, respect the beliefs of others and try to find common ground.”

His Holiness mentioned the “golden principle in the cause of peace”mentioned in chapter 3, verse 65 of the Holy Quran, which encourages people to focus on those beliefs that unite them by stating:“Come to a word equal between us and you”.

“Thus, the Quran has taught us how to build a peaceful multicultural society, where people of all faiths and beliefs are able to live side by side. The key ingredients are mutual respect and tolerance.”

Referring to the theme of the Peace Symposium 2017, ‘Global Conflicts and the Need for Justice’, His Holiness said a lack of justice had “plagued every segment of society”and that whilst it was undeniable that today certain Muslim countries are at the “epicentre of wars and cruelties”, it was wrong to say that the rest of the world was immune from disorder. 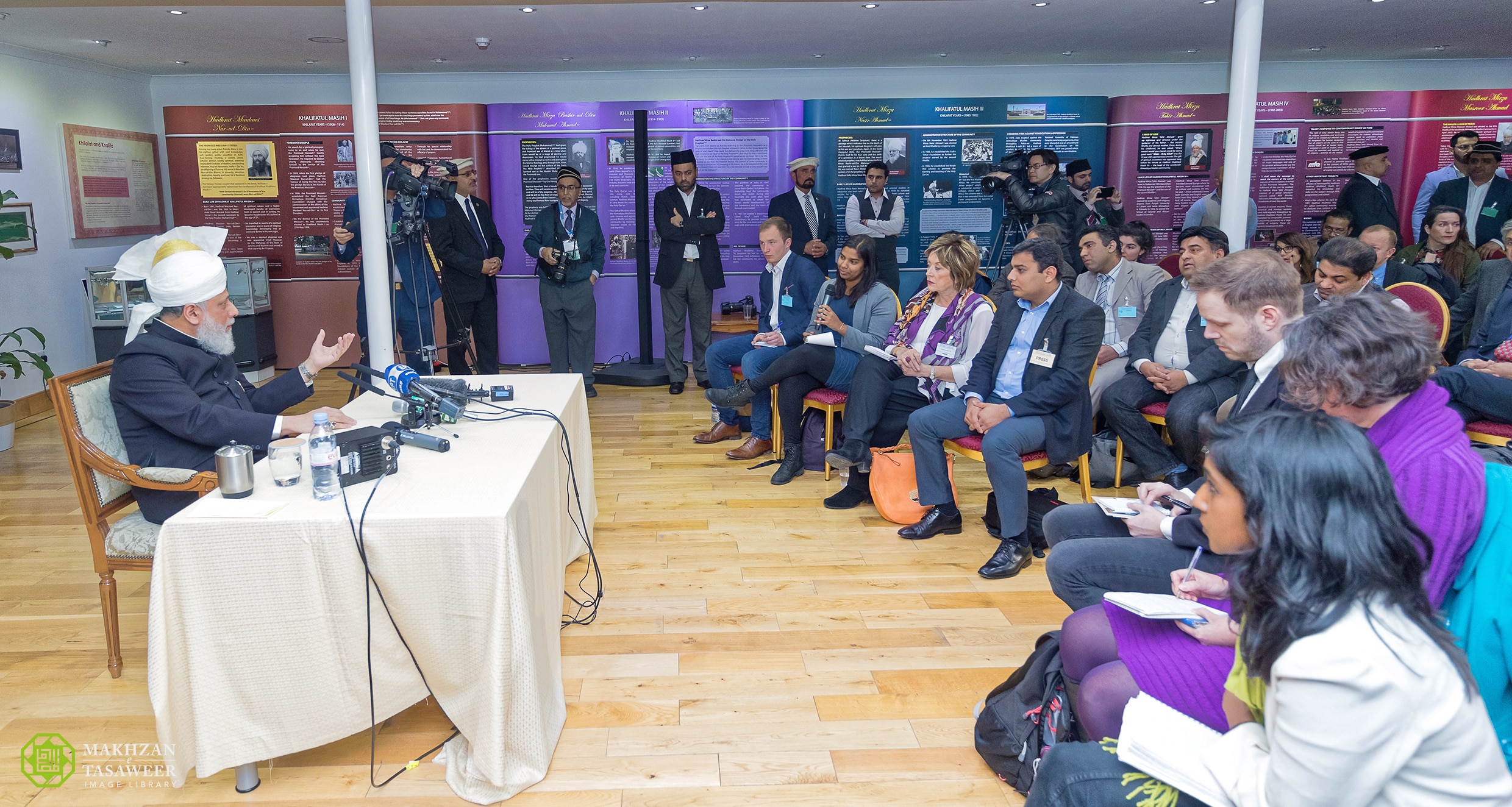 Speaking about the need for mankind to pull together, Hazrat Mirza Masroor Ahmad said:

“The need of the hour is for us to knock down the barriers of fear that divide us.  Rather than erecting walls that keep us apart, we should build bridges that bring us closer together… We must stand up against all forms of oppression, hatred and use all our capabilities to try and foster peace in the world.”

“Sadly, with the passing of time, it seems that we are losing our ability to listen and to tolerate opposing views and perspectives. Opening the channels of communication and facilitating dialogue is essential, otherwise the world’s malaise will only get deeper…Instead of pointing fingers and blaming one another, now is the time for solutions.”

Thereafter, His Holiness condemned the international arms trade, which he said was a means of fuelling warfare and ensuring that the world remained bound within a perpetual cycle of violence.

“In my opinion there is one ready-made solution that can have an instant impact and begin the process of healing the world. I refer to the international arms trade, which I believe has to be curbed and restricted.”

“Whilst the primary interest of every nation should be the well-being of mankind and achieving peace, it is a sad truth that business interests and the pursuit of wealth invariably take priority over such concerns.”

His Holiness deemed the argument that the sale of weapons may ‘encourage’ peace by working as a ‘deterrent’ to be “completely senseless” and said such justifications had “caused the world to become embroiled in a never ending arms race”. He also said that no nation should think it is“immune from danger” because history taught that wars “evolved rapidly and often unexpectedly”.

His Holiness warned of the risks of nuclear warfare, which he described as “unimaginable” and called on mankind to think long and hard about the type of world it wished to bequeath to future generations.

“Rather than leaving behind a legacy of prosperity for our coming generations, we will be guilty of leaving behind only sorrow and despair. Our gift to the world will be a generation of disabled children, born with defects and intellectual disabilities. Who knows if their parents will even survive to care and nurture them?”

“Always remember that if we seek to pursue our own interests at all costs, the rights of others will be usurped and this can only lead to conflict, wars and misery. We must all reflect and understand the precipice upon which we stand.”

“My message to the world is to look at tomorrow, and not just today.  Let us leave behind a legacy of hope and opportunity for our children, rather than burdening them with the horrific consequences of our sins.”

“I pray that God grants sense to the people of the world and that the heavy clouds that loom above us give way to a bright and prosperous future.”

Prior to the keynote address, various dignitaries spoke about the importance of peace and the critical state of today’s world. 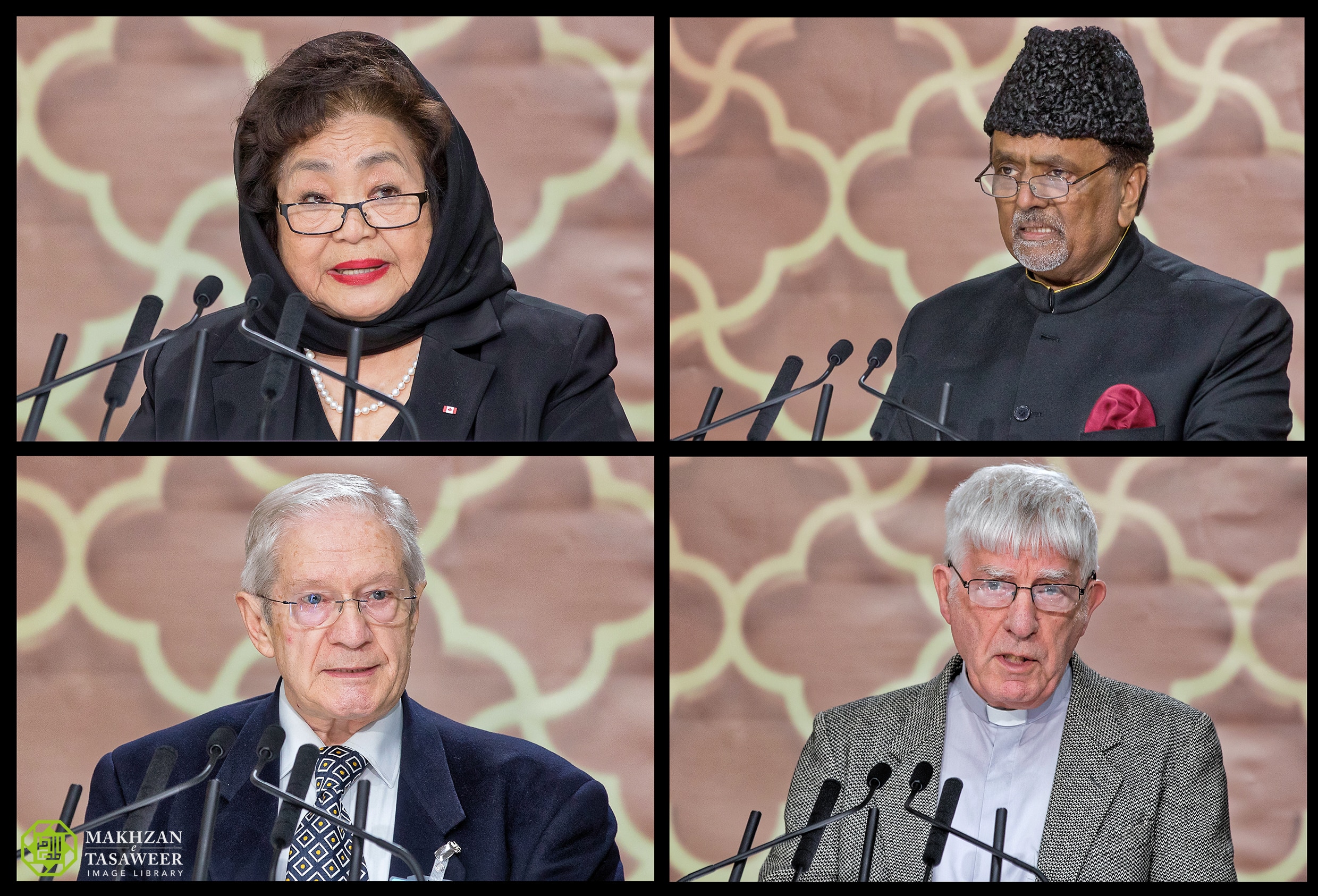 Rafiq Hayat, the National President of the Ahmadiyya Muslim Community UK, offered his condolences to the victims of the Westminster attack and paid tribute to PC Keith Palmer who sacrificed his life for the sake of defending the nation’s democracy.

“I want to thank you, Your Holiness, in a very special way, because listening often to your talks and very many interventions in many parts of the world, you have not only been a promoter, not only a creator of what we badly need today, that is a culture of dialogue, you have been a champion of this, you are an example.” 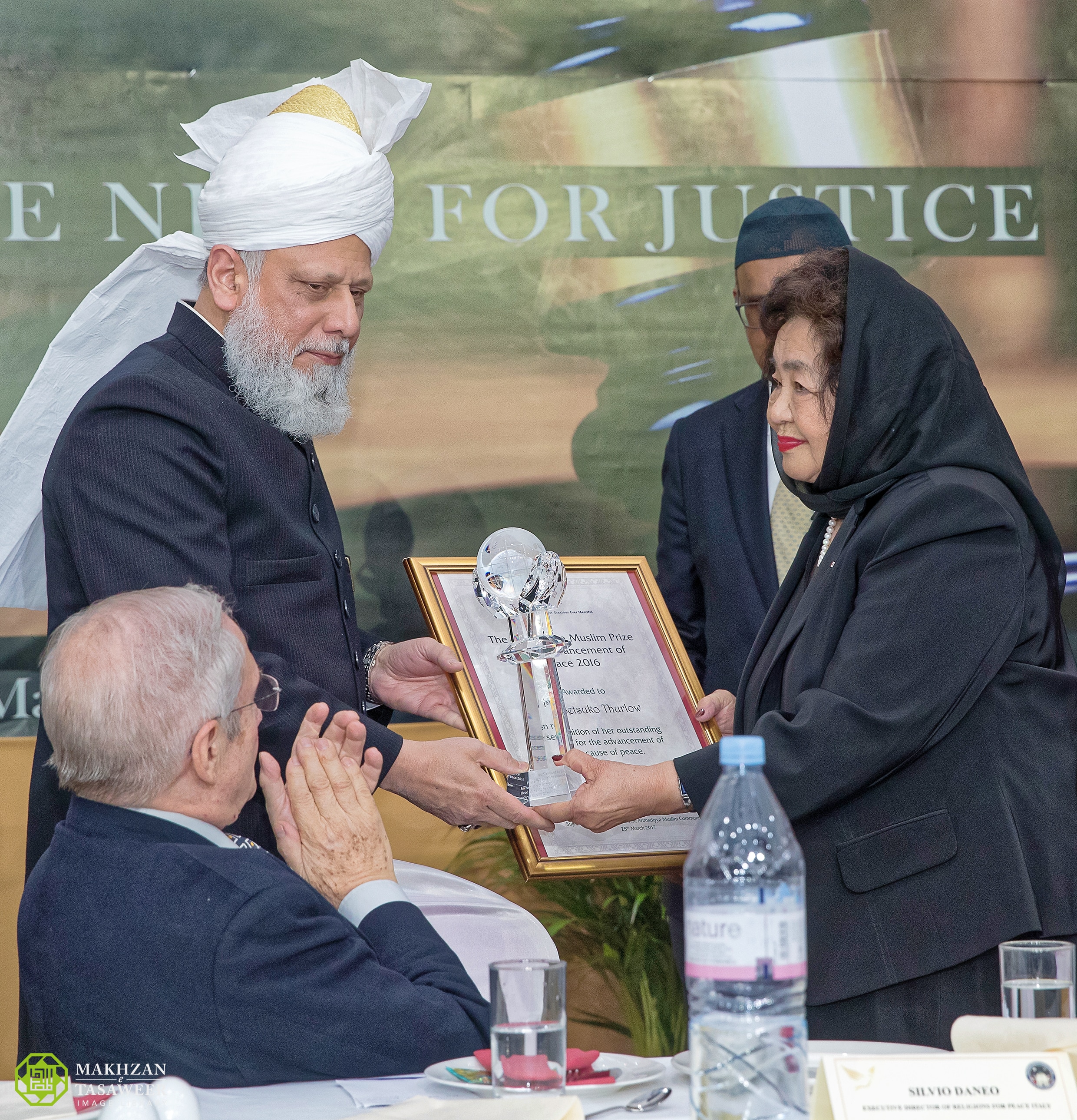 Ms. Setsuko Thurlow, recipient of the Ahmadiyya Muslim Prize for the Advancement of Peace, said:

“In attempting to learn about your organisation’s history, mission and activities, I learned with pain of your struggle and suffering from religious discrimination and persecution. Yet, in spite of that, you have chosen the principles of non-violence, peace and justice and exemplify them in your daily lives through your motto of love to all and hatred to none. What an enlightened role model you are to the world community.”

Further, Father David Standley, representing the Archbishop of Southwark, read out a message from the Vatican in support of the Peace Symposium.

Both before and after the proceedings, His Holiness met personally with various dignitaries and guests and also held a press conference with members of media.